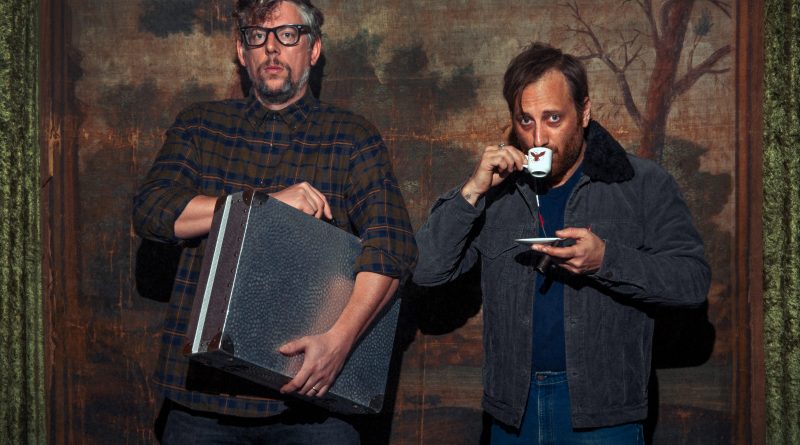 Chill. That’s the best word to use to describe Dan Auerbach, the singer/guitarist of The Black Keys.

While he may be laid back during an interview, Auerbach says that he’s excited to be touring again with Patrick Carney, the other member of this Grammy Award-winning duo. They’re in the midst of their Dropout Boogie tour (the name of their latest album), and will be cranking out some tunes live for audiences for the first time.

“We’re bringing some artists out with us. So, Ceramic Animal, the Velveteers, Early James—depending on what city you’re in, one of those acts go on first. Band of Horses is playing before us. We’ve never toured with them, so that’s a first,” says Auerbach. “We’re doing the Delta Kream set in there, and we’ll have songs from Dropout Boogie that we’ve never played before. So, it’s going to be fun.”

In 2021, The Black Keys received their 14th Grammy nomination for Best Contemporary Blues Album for Delta Kream, which features 11 Mississippi hill country blues songs by artists such as Junior Kimbrough and R.L. Burnside, among others. In previous years, they’ve been nominated and/or won in various categories: Best Rock Instrumental Performance, Best Alternative Music Album, and Best Pop Duo, to name a few. Likewise, their musical style has been described as everything from indie rock to garage band rock to punk blues and blues rock.

Which one does Auerbach think best fits?

“I don’t really give a shit,” says Auerbach, referring to the different descriptions of their music. “I just say rock and roll.”

Although The Black Keys officially formed in Akron, Ohio in 2001, Auerbach says, “Pat and I have known each other since like as early as we can remember. Some of our earliest memories—Pat and his brothers always lived down the street. We never really talked until we were in high school when our brothers introduced as two people who played music,” he says. “We didn’t know the other one played music. We were in different grades. We had different friends. We knew each other, but we had never spoken.”

Auerbach started playing guitar when he was 14 because he wanted to be able to play music with his mom’s family, including his aunts and uncles. “They all played instruments. My mom played piano. But I never learned to play piano,” says Auerbach. Then he adds jokingly, “like an idiot.”

He got the musical gene from his dad’s side as well. “My dad played a lot of ‘60s rock and soul and blues music. So I was raised on that. My mom’s family all played bluegrass, then my uncle played in a band. Every couple of weeks, he played harmonica and guitar in like a soul and blues band. He has great taste in blues records: Johnny “Guitar” Watson, Lightnin’ Hopkins, Guitar Slim. Just like some really good raw stuff, and I loved it,” says Auerbach.

When Auerbach and Carney first got together, although Dan was into blues, Pat was more into indie rock. And Auerbach says they grew up in a time when hip hop was pop music. “There were all kinds of influences swirling around,” he says. “Pat had a cassette 4 track, and I’d never seen one before. We just got together and made mixtapes.”

At the time, Carney’s uncle played with Tom Waits on the B-52s’ records, and Auerbach’s cousin played with Lou Reed. “We had this like weird, current musical connection. Maybe in the back of our minds it gave us more confidence than we otherwise would have normally had. I don’t know,” Auerbach explains. “As soon as we got our record deal, we both fully committed, and that became our full-time life.”

And what a life it’s been. In addition to headlining festivals in North American, South America, Australia, and Europe, the duo has won six Grammy Awards.

But they almost didn’t actually go to the ceremony that first time. “You know, we never even would have thought about going to the Grammys if our managers hadn’t told us to go. It probably wouldn’t have even dawned on us,” admits Auerbach.

Before they became famous, The Black Keys were driving 11 to 12 hours each day to get from show to show. “To like make $10 a show. Absolute fucking insanity. I don’t know how we did it,” says Auerbach. They did, though, and it led to their success: from selling out arena tours to being called “rock royalty” by the Associated Press to releasing eleven albums to date.

“Music has just never lost its appeal to me. I’ve always been obsessed with it ever since I started playing. There’s still so much mystery there. Anything can happen on any given day. It’s so addictive, you know? I wouldn’t be surprised at anything at this point. When we started, we had no idea; we had no idea what we were about to do,” says Auerbach. “We were always just screwing around, and we’re still just screwing around. But now we get paid to screw around.”

The Black Keys will be at the Shoreline Amphitheatre in Mountain View, CA October 5, and then at the Kia Forum in Inglewood, CA October 8.

Michele “Wojo” Wojciechowski is a national award-winning writer and author of the humor book Next Time I Move, They’ll Carry Me Out in a Box. Her work has appeared in publications such as Vanity Fair, Esquire, Parade, Discover, AARP, PBS’ Next Avenue, Family Circle, Reader’s Digest, and many more. Over the last few years, she’s been learning to play the drums and dreams of playing one song with the Foo Fighters. Oh yeah, and she’s got a Xena Warrior Princess costume hanging in her closet. Don’t ask. Reach her at WojosWorld.com, Twitter @TheMicheleWojo, Facebook WojosWorldFanPage.com.