There once was a time when the day after Thanksgiving was just a day off from school. Kids played outside in the cool autumn air while adults wondered what the heck they were thinking cooking so much food the day before. Then came Black Friday, the mother of all things ugly about consumerism.

Black Friday might just as well be called Black and Blue Friday for anyone who decides to get in their car and maneuver through crazed masses for lone parking spaces and deals so good, no junkie, uh, make that consumer crazed fool, can pass up. It takes about 15 seconds into this day before the first videos of fights breaking out in lines outside our most cherished temples called Wal Mart and Costco.

And while I am on the subject of Black Friday, why is it called Black when the only color that matters is the green in our wallets? Maybe I am not allowed to comment on this being that I am an older White male who is actually not a racist supporter of our Idiot-in-Chief. However, if we are going to drag color into this, then why do blacks get the lone day of the year dedicated to them? After all, I do not see Redneck Wednesday, the day when people begin camping out in parking lots to wait for Black Friday to begin.

Normally, I would just let Black Friday slide rather than let it get under my skin. Not anymore. I refuse to remain silent on it now that Black Friday is a week-long affair. Americans have become so addicted to scoring deals that one day is just not enough for them. You see, now that they have been given a free taste of the drug, they’re hooked and need more. Why not just change the name of November to Black Friday or better yet, Blackvember?

I didn’t even know I was scoring a Black Friday deal when I purchased a new car the other day. While test driving it, I asked the salesman if they were gearing up for Black Friday. He proceeded to inform me I was already taking part in it. Turns out I was early to a party I had no intention of attending.

My home sits in a neighborhood that is just a five-minute walk to the nearest shopping center. If I can’t find what I want at the local Tuesday Morning (another name I will never understand) or Big 5, then it is off to Rite Aid to buy gift cards. Black Friday will not claim my soul or what’s left of my energy after a tryptophan overdose the day before. Besides, now that we have Cyber Monday, I can shop on line in my pajamas rather than looking like everyone shopping in theirs at Target.

When I was a student at Chico State, there was a popular bar that offered up Burger Madness Night every Wednesday. They didn’t have to Call it Burger Wednesday. We actually knew what day of the week it fell on. We also knew the next night was called Ladies Night and while Chico has always been a party town, Friday night was just part of the weekend. We might have blacked out on Friday from too much Old Milwaukee, but there wasn’t a Black Friday in those days.

Imagine if you are part of a family where money is tight and you cannot afford to shop for gifts that will be tossed out in time for next year’s Black Friday. Black Friday becomes Bleak Friday. I imagine there are a lot of displaced folks here in California who would love to leave their tents and hit the stores on Black Friday. Instead, they get to worry about things like how to stay warm when the first freeze comes along. They do not have the luxury to go blow up their credit cards and put the next year on lay away like so many of us will. They choke on the air they breathe while the rest of us jump for joy over the deal we scored on a flat screen TV.

I shouldn’t get down about all the people we have who fall into the have not category. A conscience just gets in the way of my entitlement to spend money on crap.

Black Friday needs me to help keep the wheels of our consumer driven society on the road. Besides, I can rest well knowing we have a wonderful leader who cares deeply about the afflicted. He will see to it each of us has a rake just so we never have to fear fires again.

Of course, even he knows rakes do no good for people in places like New Orleans. If you are one of them, I hear there is a good deal on masks and snorkels at your local Dick’s Sporting Goods. You might want to get in line early. 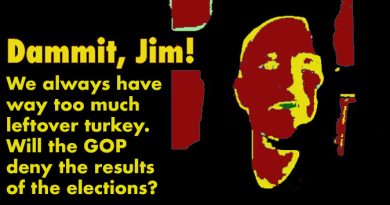 Thanksgiving happy? We’re one year closer to the last