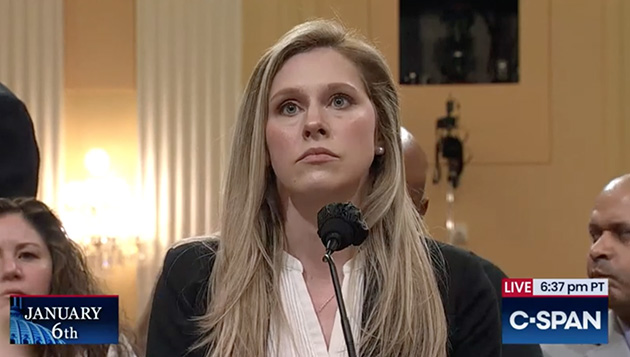 Did you happen to watch the first televised 1/6/21 hearing? People were disappointed Fox News wasn’t airing it, but why should they? They all know what they did in support of the insurrectionists, not to mention their phone calls to former President Trump on the day of, asking him to stop the insurrection.

Probably one of the most shocking revelations:  the attack on the capitol was premeditated. The Proud Boys, and others, had been planning it since mid-December 2020.

We all remember the presidential debate when Trump was challenged to denounce racism and white supremacy, and specifically the Proud Boys. Trump said, “Stand back and stand by!” The leader of the group, a dark-skinned Spanish guy name Enrique Tarrio tweeted his reply to Trump: “Standing by sir!”

Trump began using Twitter to prep the MAGA cult for January 6. He actually had been prepping his cult for months before the November 3 election. On December 20 Trump tweeted his “invitation” to the MAGA crowd to show up in Washington, “Big protest in DC on January 6th. Be there, will be wild!”

It was wild all right. And it was not a spontaneous uprising. Evidence shows that the white supremacist groups like the Proud Boys and Oath Keepers had been planning the attack with Trump allies and advisors, and quite possibly the president himself. Let’s not quibble. President Donald. J. Trump was neck deep in the coup d’état.

The first night of the live and public hearings by the House Select Committee to Investigate the January 6th (2021) Attack on the United States Capitol was a two-plus hour overview of the conspiracy to overturn the 2020 presidential election. It started with the opening statements by the chair, Congressman Bennie Thompson, and Vice Chair Congresswoman Liz Cheney. Then they got to the testimony and video evidence, starting with the video recorded questioning of former Attorney General Willian Barr. He testified that he told former President Trump his claims of fraud were bullshit and he wasn’t going to be a part of it, which is why he resigned shortly after the November 3, 2020 election.

Trump’s daughter Ivanka said she respected Barr and believed his assessment of the stolen election and fraud claims — in other words she knew her father was lying about it.

In fact everyone in Trump’s inner circle — his official inner circle, not the nutbars who were feeding the former guy bullshit — the inner circle was convinced well before the end of November the claims of voter fraud were B.S.

We learned quite a bit from the first public hearing, and it started with the opening statement by the committee’s vice chair, Congresswoman Liz Cheney (R-WY). If you have only heard or read snippets from it, it is worth reading in full.

“Mr. Chairman, at 6:01 p.m. on January 6th, after he spent hours watching a violent mob besiege, attack and invade our Capitol, Donald Trump tweeted. But he did not condemn the attack. Instead he justified it:

“‘These are the things and events that happen,‘ he said, ‘when a sacred landslide election victory is so unceremoniously & viciously stripped away from great patriots who have been badly & unfairly treated for so long.’

“As you will see in the hearings to come, President Trump believed his supporters at the Capitol, and I quote, ‘were doing what they should be doing.’ This is what he told his staff as they pleaded with him to call off the mob, to instruct his supporters to leave. Over a series of hearings in the coming weeks, you will hear testimony, live and on video, from more than a half dozen former White House staff in the Trump administration, all of whom were in the West Wing of the White House on January 6th. You will hear testimony that ‘The President didn’t really want to put anything out’ calling off the riot or asking his supporters to leave. You will hear that President Trump was yelling, and ‘really angry at advisors who told him he needed to be doing something more.’ And, aware of the rioters’ chants to ‘hang Mike Pence,” the President responded with this sentiment: “maybe our supporters have the right idea.’ ‘Mike Pence deserves’ it.

“You will hear evidence that President Trump refused for hours to do what his staff, his family, and many of his other advisors begged him to do: immediately instruct his supporters to stand down and evacuate the Capitol.

“Tonight, you will see never-before-seen footage of the brutal attack on our Capitol, an attack that unfolded while, a few blocks away, President Trump sat watching television in his dining room off the Oval Office. You will hear audio from the brave police officers battling for their lives and ours, fighting to defend our democracy, against a violent mob Donald Trump refused to call off.

“Tonight and in the weeks to come, you will see evidence of what motivated this violence, including directly from those who participated in this attack. You will see video of them explaining what caused them to do it. You will see their posts on social media. We will show you what they have said in federal court. On this point, there is no room for debate. Those who invaded our Capitol and battled law enforcement for hours were motivated by what President Trump had told them: that the election was stolen, and that he was the rightful President. President Trump summoned the mob, assembled the mob and lit the flame of this attack.

“You will also hear about plots to commit seditious conspiracy on January 6th, a crime defined in our laws as ‘conspir[ing] to overthrow, put down or destroy by force the Government of the United States, or to oppose by force the authority thereof.’ Multiple members of two groups, the Oath Keepers and the Proud Boys, have been charged with this crime for their involvement in the events leading up to and on January 6th. Some have pled guilty. The attack on our Capitol was not a spontaneous riot. Intelligence available before January 6th identified plans to “invade” the Capitol, “occupy” the Capitol, and take other steps to halt Congress’ count of Electoral Votes that day. In our hearings to come, we will identify elements of those plans, and we will show specifically how a group of Proud Boys led a mob into the Capitol building on January 6th.”

That’s incredible. Liz Cheney, like any good prosecutor, laid out the facts — not conjecture — of what former President Donald J. Trump did — and didn’t do — leading up to and during the attack on the capitol.

It’s hard not to remember these words from Congresswoman Cheney: “President Trump summoned the mob, assembled the mob and lit the flame of this attack.”

The entire hearing was incredible. The testimony of the two witnesses was eye-opening; what capitol police officer Caroline Edwards told the committee moved some people to tears.

Edwards was the first police officer to be injured on January 6, 2021. She had been knocked to the ground and lost consciousness. Even though she had a concussion, which she probably didn’t realize at the time, she got up and got back into the fight. Edwards described it as hand-to-hand combat and stated she had been trained for many things pursuant to her job, but going into battle wasn’t one of them.

In video recorded testimony General Mark Milley said that the president didn’t do or say anything to him to quell the insurrection at the capitol. It was Vice President Pence. And Chief-of-Staff Mark Meadows called Milley and said they had to craft a narrative that had Trump doing the work to stop the violence. As far as Trump was concerned his fellow insurrectionists were doing what they were supposed to be doing.

One of the more loathsome members of Trump’s cabinet, Secretary of Education Betsy DeVos, apparently said she resigned from the cabinet because Pence refused to invoke the 25th Amendment, i.e., the one that gives the vice president the power to remove the president from power with a two-thirds vote by the cabinet.

Wow. Sometimes even the ones we dislike the most show some decency and principles. I’ve listened to Liz Cheney and Congressman Adam Kinzinger talking about issues near and dear to my heart and thought I would absolutely never — never say “never” — be on the same side of anything with those two. Sometimes it feels good to be wrong.

Included in this screed (some may find this to be tedious) you will find links to the entire hearing, Cheney’s opening statement and the testimony of Caroline Edwards.

Monday morning, 10 a.m. eastern time and 7 a.m. Pacific time, we can watch the second public session of the January 6 committee.  C-SPAN will post the entire hearing on YouTube. So for those who cannot tune into it live, there will be plenty of opportunity to view it all.

Oh yeah, it’s not likely Fox News will carry it — although they did celebrate Pride Month. That didn’t go over too well with their base. I guess even Fox News occasionally has some decency and principles … a dark shudder just rolled down my spine. I better be careful here. I don’t want to be seen as giving a pass to the MAGA Cult.