On Saturday, July 16th 2016 the EOD Warrior Foundation held is first annual “West Coast EOD Classic Golf Tournament” at the beautiful Angeles National Golf Club in Sunland, California. The goals were simple and profound; they were to raise funds for the great work of the organization while those who participate have a great day of fun, comradery and golf. It was a real success on every level.

Well over 130 people, many active duty or former military and/or law enforcement, showed up in support. Scanning the group revealed that many in attendance were also “Gold Star” meaning the family of those fallen in service to their country. One of the major supporters of the EOD Warriors Foundation is the Los Angeles Police Department who showed up in grand style with one of their very imposing Bomb Squad trucks. But who is the EOD Warrior Foundation and why is their work so important?

The EOD Warrior Foundation is located in Niceville, Florida just north of Elgin Air Force Base. They exist to help the families of fallen EOD technicians often with emergency financial support, emotional, hope and wellness support and to honor the fallen heroes with the EOD memorial at Eglin Air Force Base. 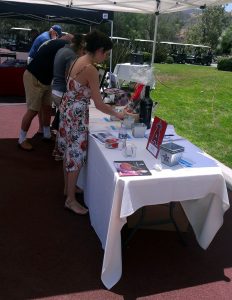 When you consider how prolific the use of explosive devices has become in the war of terror the demand on EOD [Explosive Ordnance Disposal] technicians has never been more essential and never more dangerous. Here is but one of many examples and just how amazingly well the work of the EOD Warriors Foundation has made a positive impact on one family.

Ken and Nancy Bennett could not have been more proud of their son Kenneth Wade Bennett when he joined the United States Army, but when their son chose to take on the job of an EOD technician their pride was tinged with some understandable fear. By November 10th 2012 Kenneth Wade Bennett [code name “Chaos”] had risen to the rank of Staff Sergeant and he was on his third tour in Afghanistan.

On that day November 10th 2012 S/Sgt. Bennett was called upon to disarm and dispose of a cluster of five bombs threatening his comrades. He successfully disarmed two of the bombs but as he went to work on the third bomb the worst thing that could happen did happen: the bomb exploded killing Wade Bennett.

Ken and Nancy Bennett were devastated but very quickly the EOD Warrior Foundation stepped up and rendered substantial and very much appreciated aid on several levels. With the help of the EOD Warrior Foundation the Bennett family was able to put their lives back together and move ahead with a deep appreciation of the help they had received and the honor that had been conferred upon their fallen son.

So moved were they that soon they started their own organization “Project Chaos” named after their son’s military radio call sign and designed to help raise more money for the EOD Warrior Foundation. You may look at their work online at www.ProjectChaos.org.

Being around this extraordinary group of exceptional people filled me with a sense of honor, commitment, devotion and honesty seldom presented at such a high level. It became very clear to me that the EOD Warrior Foundation is one organization that has truly lived up to its stated goal and has come to the meaningful aid of hundreds if not thousands of family members all over our nation.

And there has never been a time I can recall when the work of EOD technicians both military and law enforcement has been more critical with global terrorism now at unprecedented levels. The EOD Warrior Foundation stands tall in their enormous support of all of those who perform this essential but dangerous work to help keep us all safe. You may learn more about the EOD Warrior Foundation at their website: www.eodwarriorfoundation.org and maybe next year I will see you at the golf course.