I made my first trip to the West of Ireland, County Mayo, in the early 70s. My late mother, Hanorah Thornton Hughes, was born there in the village of Tavanaghmore, near Loch Conn. The closest town was Foxford, famous for its woolen mills. It was only minutes away by car.

When I got to Foxford, of course, I headed to one of its pubs to get myself a pint of draft beer. (I was never an ale kind of guy.) It was on a pleasant Sunday afternoon. I could hear a band banging away as I entered the crowded establishment. I was sure it would be belting out a roaring Irish rebel tune. Wrong!

The seven-member combo, looking fresh out of high school, was playing, with gusto, much to the enjoyment of its large audience, a John Denver song. It was his first major pop hit – “Country Roads, Take Me Home!”

I was pleasantly surprised. I had counted myself as one of Denver’s earliest fans. I also felt proud that a young fellow American was being recognized, and appreciated for his musical talents so far away from his home.

Who was this musical phenom – Denver? Where did he come from? And, how did he make such fervent fans from across the Atlantic so quickly?

Denver was born in Roswell, New Mexico, on December 31, 1943. This is a few years before the town got enmeshed in all that weird business about those crescent-shaped flying space crafts. Denver’s father was then in the U.S. Air Force and recognized for “breaking the world speed record in a B-58 bomber,” according to author John Collis.

The full moniker of John’s dad was Henry John Deutschendorf, Sr. Think German ancestry to the bone. His nickname was “Dutch.” John was the oldest of his two children, both boys.

Denver’s mom, a housewife, was Emma Louise Swope. Her roots were both Celtic and German. Tulsa, Oklahoma, was one of the family’s earlier home bases. Because of the father’s successful career in the Air Force, they moved around a lot. You could call it “rootless,” Coliss reported.

It was Denver’s maternal grandmother, Mattie, who gave him an important birthday present which he never forgot when he was about twelve years old. It was an acoustic Gibson guitar! What a prophetic gift that turned out to be in the evolution of Denver’s fantastic career. 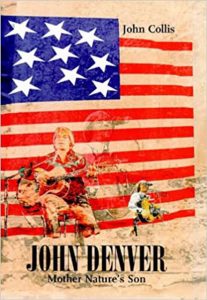 That moving around a lot, Denver confirmed, was a bummer, but also, in a stroke of luck kind of way, an inspiration for him. He said the “out-of-doors was my first and truest friend,” Coliss wrote. He was referring to the “desert in Arizona; the woods in and around Montgomery, Alabama; wheat fields…forest and lumbers camps.”

Denver continued: “Nature has always been my best friend. And my songs are full of images from nature.”

Coliss suggested that Denver’s love of nature had a name and that it also had “a religious foundation.” It’s called: “Pantheism.” Denver, however, never embraced that theory or any other about his music.

In any event, for whatever reason, Denver’s singing, and music-making, was  magical. It went on to inspire tens of millions of followers around the globe.

Back in the mid-60s, however, as he was beginning to launch his spectacular career with folk music groups, it was suggested he take a stage name. Why? Because, his agent cracked: “Deutschendorf wouldn’t fit on a record label.” He wisely chose: “Denver.”As for as his singing style, Denver said he never “wanted to copy anybody else.” He said he was “blessed” doing his own thing and by doing so, he found out who “I was as a performer,” Collis wrote.

With respect to Denver’s love life, there was, first, Annie Martell. They were married in June, 1967. The relationship lasted till 1982. It’s fair to say she was with him before he became famous. The song “Annie’s Song” was about her.

Cassandra Delaney, an actress, followed Martell. That marriage was shorter. It endured from 1988 to 1993.

Getting back to Denver’s music life. In the late 60s, Denver wrote a song “that was to change his life.” He wanted to call it “(Oh, Babe, I Hate to Go.” But, his then-agent, Milt Okun insisted on a name change. The new title was: “Leaving on a Jet Plane.”

The rest as they say, is history. Okun played a huge part in Denver’s rise to stardom. By the end of his days, Denver had recorded close to 300 songs, most of which he had written. It is estimated he sold over 33 million records.

Some of Denver’s other famous hits were: “Rocky Mountain High”, “‘Thank God I’m a Country Boy,” Sunshine on My Shoulders,” and “Calypso.”

Denver was also a noted activist on a global scale. He was an avid environmentalist and a champion of the “Hunger Project.” Denver, too, always put his money where his mouth was. He regularly donated generously to the humanitarian causes that he espoused.

Like the rest of us, Denver had a “shadow side.” At times, he reportedly drank too much for his own good. His fights with the women in his life, also, sadly, could cross the line. By all accounts, he could get physical with them.

I’ll leave the details of those allegations and more about Denver’s family life, including his ties with his children; and, his often-strained relationship with his father, to John Collis’ book, “John Denver Mother Nature’s Son,” and to Arthur Tobier’s tome, “John Denver: Take Me Home.”

Following in his father’s footsteps, Denver took up flying later in his life. Sadly, it ended in a tragedy. An experimental airplane he was piloting on October 12, 1997, crashed into Monterey Bay. He died from the trauma of the impact. Denver was only 53 years of age.

Besides his splendid musical legacy, Denver left behind his awesome activism in the field of the environment. Collis said his “attempts to improve our relationship with the planet was at the heart of Denver’s finest work.”

Top photo is a YouTube screenshot of John Denver

Happy St. Patrick’s Day unless you’re Catholic in which case you have to pass on it

Billy the Kid will live forever