The Los Angeles Rams are heading into their 4th week of training camp. After a second win at the L.A. Coliseum, the coaches are beginning to focus in on the players that will make up the 2016 regular season roster.

In the game against the Kansas City Chiefs Saturday, the Rams were more competitive in the first half than they were against the Dallas Cowboys the week before. Even though the Chiefs scored first, the Rams, led by Case Keenum, were able to follow with a score, a rushing touchdown by Todd Gurley.

For Rams head coach Jeff Fisher, he was pleased with not only the win, but also the fan support in the Coliseum. He told the media after the game, “It was fun to start the preseason off 2-0, especially here at home. You know, I can’t say enough about the environment, the atmosphere and the fans. So many of them stayed and it’s unusual that they would stay through the game like they did, and then when we needed them they came around and they were loud. So we’re really looking forward to the home field advantage that we’re going to get with their assistance here when we come back the next time for our home field opener against Seattle.”

The next home game for the Rams will be September 18 against the Super Bowl XLIX champion Seattle Seahawks.

Starting quarterback Case Keenum isn’t a highly regarded QB by most analysts, but Fisher was pleased with Keenum’s performance in the first half. “He’s putting the ball in the end zone. He’s got a good feel for what we’re doing. We’re keeping things simple, but he’s making the plays. That was a great throw to [WR] Kenny [Britt] where we got the defensive pass interference call. He read it out and let it fly and good things happen when you do that. I was pleased with what he did.”

Keenum was impressed with the running game, which starts with 2015 Rookie of the Year, Todd Gurley. Keenum told the media, “The guys are running the ball really hard. Todd [Gurley] ran some really good runs down there in the red-zone. Benny [Cunningham] had again another great game, which you guys are going to come to expect from him every week and see that from him every week more so. It’s nothing new. Benny has been playing at a high level and it’s fun to watch.”

He was asked about remaining the starting quarterback. Jared Goff was drafted first to be the starting QB of the future. Some people believe Goff will assume that role before the season is over. After the game Keenum said, “…the opinions that matter for me are in this locker room — that’s with teammates and coaches. I’m trying to do the best I can. I think we are doing a pretty good job right now.”

But he did have praise for the rookie QB. “I thought Jared battled through it. Just like I said, when you don’t get into a rhythm, when things aren’t happening the way you expect them to, to be able to get back on track is really tough to do and it was good to see him do that.”

For his part, Goff was a little more critical of his performance in Saturday’s game; he fumbled twice, losing the first to the Chiefs who scored a field goal as a result. He said, “I tripped. It was a quick-hand play. I was stepping up. I was going to run. Tripped over my [offensive] lineman and fell, and put the ball down, and it came out. Can’t do it. It’s ball security. I got to hold onto the ball there. I think that’s what the preseason is for … to make mistakes that I hopefully won’t make again and that I can learn from.”

Goff got his first NFL touchdown pass in the 4th quarter. He said, “It’s exciting. It really didn’t hit me until I hit the sidelines and was like, ‘Man, that was my first one.’ It kind of felt like a regular touchdown; like it was at Cal or in high school. It was cool, but I was much more happy we won the game. Ultimately, that’s what we wanted.”

Wide Receiver Tavon Austin was mostly pleased with the way the Rams offense performed, but he said the team needed, “Just a little bit more completions. I think we [receivers] need to be more in the game, we had a couple more mistakes — the offensive linemen and the wide receiving crew, that’s the only thing I can speak on. Just getting on the same page, keep on doing what we’re doing, we should be alright.”

The defense did give up 20 points, three of those as a result of Goff’s fumble, and Alec Ogletree, leader of the Rams defense, said, “Once you settle down and play, everything just kind of flows and you get in a groove of things. I definitely felt better about the next series after we did the first series.”

The Chiefs scored on their first drive. After the game the Chiefs head coach Andy Reid told the media he was happy with his first and second teams. “there were some good things that I saw today from the first and second group.” Of his third team, Reid saw the problems. “We got into the third group and we struggled a little bit. We kind of shot ourselves in the foot, again. We’ve got to do a better job there – especially when you’ve got the ball right down in there – we fumbled the snap and gave the game away. But it’s a good tribute to the Rams. They’ve done a nice job.”

Reid should be happy with the play of his two leading quarterbacks, Alex Smith and Nick Foles, who was let go by the Rams before training camp started. The call Jeff Fisher made to Foles was part of the first episode of “Hard Knocks: Training Camp With the Los Angeles Rams.”

Reid told the media, ““I thought Alex did well – well enough where I felt comfortable pulling him out and getting Nick [Foles] a couple of reps in there early with the first group, which he needs. He needs to keep coming along. He’s playing catch-up right now, but he did a nice job, too.”

Foles competed 18 of 22 passes for 133 yards, with no touchdowns or interceptions. He did lead the Chiefs to a field goal in one drive.

He spoke to the media after the game about playing his old team, which was the St. Louis Rams at the time. He began the 2015 season as the starting QB, but was benched, replaced by Case Keenum.

“Yes, it’s always emotional when you go back to playing a team that you played with. There’s a lot of friends that I kept in touch with or bonded with in my year in St. Louis. So just to see them all and play against them, play against your old coaches, there is an emotion to that. But, it was fun to go out there with my new teammates and just continue that bonding and just play some ball,” he said.

There are two more pre-season games for the Rams, the next one in Denver against the Broncos, August 27 and the last one September 1 in Minnesota against the Vikings.

Wyatt Mills talks about society and his art 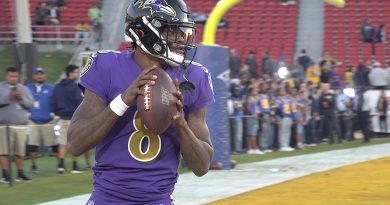