Bernie Berners walked out of the Democratic National Convention Tuesday before former President Bill Clinton spoke so elegantly about his wife, the first woman to be nominated by one of the major political parties to be president of the United States. But that happened late in the day, after Hillary Clinton was officially nominated as the Democratic candidate for president.

One thing I learned during the all important roll call vote: switch to C-SPAN so you can actually hear the roll call. The roll call vote, for those who may not be familiar, is how the presidential candidates are formally accepted as their party’s candidate. It goes alphabetically: Alabama, Alaska, Arizona, Arkansas, California … you know, we don’t have any states that begin with the letter “B.” 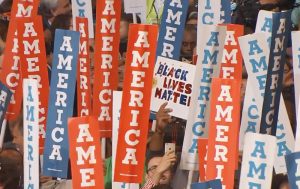 Along with all 50 states, the territories and Americans abroad are represented. Those are people that live outside of the U.S. but retain their citizenship. Jerry Sanders brother, Larry Sanders, lives in London and he proudly announced the number of delegates voting for his brother. It was a touching moment.

During the roll call many — most — of the states take the moment to announce how many delegates each candidate received from the state. It’s quite a spectacle, and usually the best thing about the second day of the convention.

The problem with watching it on the news channels, CNN, MSNBC and the faux news, Fox News, the talking heads insist on talking while the states announce their delegate counts. The Mayor of Baltimore, Stephanie Rawlings-Blake, announced the number of delegates each state had and then the state’s representatives at the microphone announce, “California, has 548 votes. How do you cast?”

“Madame Secretary, California, home of the Los Angeles Post-Examiner and its awesome editor blah-blah-blah casts 222 votes for the history-making senator from Vermont, Bernie Sanders and 325 delegates for the next president of the United States, Hillary Rodham Clinton.”

Yay, cheers and boos, cheers and boos … California has the most delegates, based on the population and a lot of those delegates are fierce supporters of Bernie Sanders. When Bernie was getting booed Monday Night, much of that noise came from the California delegation. Sanders was so close to winning the state Hillary Clinton and her surrogates crisscrossed the state campaigning — and she didn’t need to because by June 7 she already had the nomination sewed up.

How bad would it look if Clinton lost bluest, most populated state in the nation? The flipside of course is that the Bernie supporters in California are living in one of the most expensive states to reside in. They struggle every day, putting up with a diminished university and public school system, thanks to the disastrous Prop 13. So the Bernie supporters are extremely agitated by the inequity that is suffocating America, especially in an expensive place like the Golden State.

Even after Monday they were still fiercely shouting their displeasure at the convention, that it was presuming Hillary Clinton was the candidate, even before the roll call vote when it is made official. Despite the fact that their candidate had conceded, had thrown his support behind Clinton, had briefly campaigned with presumptive nominee.

Thank you Bernie Sanders. America owes you a debt of gratitude and it’s up to the Democratic Party, led by Hillary Clinton and Bernie Sanders, to pay that debt by defeating the gun lobby for common sense gun control — that includes limits on ammunition and magazines — by implementing common sense policies to slow down climate change, to improve our schools nationwide, to give every American health care, to make it possible that every student that wants to go to college can, if they qualify, without going into debt for the rest of their lives. And so much more.

So when Bernie Sanders stood with the Vermont delegation and said, “I move that Hillary Clinton be selected as the nominee of the Democratic Party for President of the United States,” unanimously and by acclimation, many Sanders supporters, led by those in the California delegation, booed and then walked out.

Knowing precisely what to do because the walkout was planned, the protesting supporters went to the media tent outside the Wells Fargo Center and occupied it peacefully.

The Berners are not going away at the convention, a small percentage of them are not unifying with the Democratic Party behind Hillary Clinton and Tim Kaine. And maybe that’s a good thing. They can keep the pressure on the party to be what they claim to be: progressive and liberal.

The highlight of the night had to be Bill Clinton’s speech, extolling the personal virtues of his wife, Secretary Hillary Clinton. Early Wednesday morning a reporter for one of the major networks, I don’t remember which, asked why we needed to know the personal side of Hillary Clinton. Why didn’t Bill talk about the troubled time when he was being impeached after his affair with Monica Lewinsky. Why didn’t he talk more about her professional accomplishments — even though a string of speakers before Bill Clinton did just that: spoke to Hillary’s accomplishments because those efforts by the candidate had impacted their lives so positively over the years. From a young woman sold into bondage, here in Los Angeles to survivors of the 9/11 attacks in New York City. How she pushed for aid and medical help for the first and second responders who became ill, some of them fatally so, because of the fumes they inhaled while looking for survivors and then remains in the rubble.

Bill Clinton spoke about his wife, the mother of their daughter, the grandmother, the woman who did all her professional accomplishments and, in Bill’s eyes, raised a great child who has become strong woman in her own right.

It’s Wednesday and already we’ve heard from gun violence survivors, parents and loved ones of people murdered by gun violence, including Mark Kelly, former Navy aviator and NASA astronaut and husband of former Congresswoman Gabby Giffords, who is a survivor of gun violence.

Hillary Clinton is a strong proponent of implementing common sense gun laws and these survivors were there to throw their support behind the candidate.

Before them California Governor Jerry Brown spoke, spending much of his short speech denouncing Donald Trump and his running mate, Mike Pence. He called Trump a fraud and a liar, citing of course Trump’s contention that there is no drought in California. A fact that is so easily verifiable 5-year olds know there’s a drought. Right now the state has at least six wildfires burning right now, the two biggest being the Sand Fire, just north of Los Angeles, and the Soberanes Fire near Carmel. Collectively that’s over 60,000 acres burned and both are still burning.

Those are just two pieces of evidence there’s a five-year drought in the Southwest, not just California.

We are waiting for the big names of the night: Tim Kaine the vice presidential candidate proceeded by Vice President Joe Biden and then President Barack Obama.

The theme right now is national defense. Leon Panetta has just said Hillary Clinton is the most qualified person to hold the office of president. He then mocks Trump, reminding everyone that The Donald told us he gets his foreign policy experience from watching TV and running the Miss Universe pageant. Panetta, former director of the CIA and Secretary of Defense, then denounced Trump for asking Vladimir Putin and Russia to commit espionage against the United States, to affect our election. Panetta said it was inconceivable for a presidential candidate to be so irresponsible.

The rest of the evening is going to be good.

Photos are screen shots from YouTube unless otherwise noted.

Martin O’Malley can’t get any traction