The L.A. Angels have a ten-game lead in the American League West Division, but they aren’t taking anything for granted because they have yet to clinch their division title. They can’t take any team or any game for granted.

The Seattle Mariners are just three and a half games behind the second place Oakland A’s and you can bet the Mariners will do whatever they can to pass Oakland in the standings and get that wild card spot in the playoffs. That’s where the race in the American League is now: who will be the A.L. wild card.

The Angels will win their division, most likely this week,; on Monday they clinched a playoff spot with a win over Seattle and the Baltimore Orioles are comfortably ahead of the Toronto Blue Jays in the East by 12 and a-half-games. But in the A.L. Central, the Detroit Tigers have a slim game-and-a-half lead over the Kansas City Royals. If the Royals overtake the Tigers for the A.L. Central title, that could put Detroit in the wild card. And that is very possible, considering Oakland’s record for their past 18 games: .333 winning percentage. The Royals are playing .500 ball right now so all each team has to do is continue in these trends and K.C. will at least win the A.L. wild card. For the Mariners, losing to the Angels put the wild card a bit farther out of reach. We shouldn’t count them out yet, but it isn’t looking good for them.

Matt Shoemaker, the best active starter in the Angels rotation, got the win for the Angels Monday Night, pitching eight full innings, giving up only one run. He felt pain in his side after he left the mound, but said he was okay to pitch his next start. Albert Pujols left the game with a hamstring cramp, but expects to play today. Pujols is having a better season than last year and Shoemaker is having a great rookie season.

Pujols, and especially Shoemaker, are two of the reasons the Angels are so good this year. Pujos has become that clutch hitter we saw when he wore the Cardinals uniform and his  performance recently shows he’s getting hot at just the right time.

Until Monday Night, Mariners starter Isashi Iwakuma had owned the Angels, so to win with seven runs off the ace was a big deal for the Angels. And Albert Pujols played a big part in the win, going one-for-two with a hit and an RBI.

In tonight’s game left-hander Roenis Elias takes the mound for the Mariners and Cory Rasmus will step up from being a reliever to start for the Angels. A new name in the starting rotation might give some people concerns, but If people still have doubts about whether the Angels can go all the way to the World Series, they just aren’t paying attention. Rasmus’s ERA is 2.80 and his WHIP is 1.13, over 45 innings this season.

In the National League West, the L.A. Dodgers are not just in the lead, they have pulled ahead of the second place San Francisco Giants by four games. It was no surprise to me the Giants lost to the Arizona Diamondbacks in Phoenix Monday. Once they lost their GM, Kevin Towers, the DBacks seemed to pick up some new energy. Sometimes it’s the spoilers who make the end of the season interesting.

Although during Monday Night’s route of the Colorado Rockies. Matt Kemp kept the N.L. West pennant race interesting when he had heated words with his teammate Yasiel Puig. No one outside of the Dodgers knows exactly what is going on with the Dodgers or what transpired between Kemp and Puig, but when asked about the fracas, which occurred during the Dodgers’ eight-run sixth inning, manager Don Mattingly said, “Oh, just talking in the dugout, same old things. We’re like the [Oakland] A’s, the ’72 A’s.”

Someone asked Mattingly if there have been any brawls in the Dodgers dugout or clubhouse this season and he replied, “I don’t think so — I hope not.”

With 12 games left in the season and a four-game lead in the N.L. West, Mattingly can afford to have a little sense of humor.

The rumor is Kemp was mad at Puig for not taking third when Adrian Gonzalez got his single in the sixth inning. When Kemp went after Puig from one end of the dugout to the other, Mattingly stepped in and ended it.  Kemp struck out in the sixth so maybe he just needed to vent.

Getting the start for the Dodgers tonight will be Dan Haren, who has been great the past few weeks. His ERA for September is .69 and his WHIP .77. The Rockies will need Haren to get affected by Acute Altitude Sickness to get any hits off him. For the Rockies: Mission Viejo native Tyler Matzek gets the start.

Coors Field in Denver, Colorado is a hitters park, as the Dodgers showed in the sixth inning last night, so if either team gets to the pitcher it will be a high scoring game.

Kyle Seager talks about the Mariners and his brother 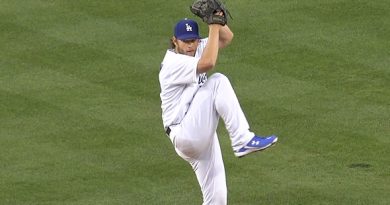