Have you ever heard of the Intergovernmental Panel on Climate Change? It’s a body of the United Nations, with an objective to “… provide governments at all levels with scientific information that they can use to develop climate policies. IPCC reports are also a key input into international climate change negotiations.”

Don’t worry, most people haven’t heard of it, even though it was created 31 years ago.

Yeah, the United Nations, and therefore the United States, have known about global warming for at least three decades, although truth be told we’ve known about it for at least 40 years. Jimmy Carter, when he was president, installed solar panels on the White House. Ronald Reagan, being the ignorant prick he was, removed them once he took office. We couldn’t be looking askance at the powerful oil and gas lobby.

Anywho, a couple weeks ago the IPCC was holding a confab in Monaco, that cute little seaside nation state adjacent to the French Riviera, and they announced climate change — global warming — is irreversible due to ocean warming crossing a tipping point. The planet has warmed 1°C since pre-industrial times and the oceans have absorbed 90 percent of that heat.

What does that mean? The world’s centers of ice, Antarctica, the Arctic Circle and Greenland, are pushing up sea levels 3.6 mm a year, twice the rate of just 20 years ago — as their ice melts. Of course that’s only 1/8th of an inch, or an inch every eight years. A recent study by scientists, published in Nature magazine, says the ice of Antarctica is melting much faster than previously known and that it alone could add three feet of sea level rise by the year 2100.

The streets of Miami Beach are already flooding on sunny, rainless days as the tide rolls in. Hundreds of thousands of people in South Asia and Indonesia have been displaced by sea level rise. Droughts and extreme weather are forcing people in Guatemala, El Salvador and Honduras to leave their homes and come north because there is no food or work for them in their countries.

Dr. Jason Box, a climate scientist who studies Greenland told David Shukman of BBC News, “Now that I’m starting to understand more of the consequences, it’s actually keeping me awake at night because I realize the significance of this place around the world and the livelihoods that are already affected by sea level rise.”

Greenland was in the news recently because scientists saw that the giant island’s ice (glaciers) has been melting at such an accelerated rate it has raised sea level by a millimeter. That may not seem like a lot, after all it’s less than a 16th of an inch. But if that happens every half year … the oceans have risen three inches in the last 25 years and the rise is accelerating. Greenland is the living lab of climate change, in the area of melting ice and glaciers.

There are places in Southern California where high tides occasionally over run the beaches and splash into the streets. Well, splash isn’t the right word, flood is more accurate.

One thing we don’t read about because most Americans don’t read outside their comfort zones, is that the warming waters are causing mass migrations of sea life as they search for cooler waters. Reefs around the world are getting bleached, dying off.

And that doesn’t even include the epidemic of plastics destroying the oceans and wildlife.

Then there are the wildfires. The Saddle Ridge Fire came rushing through the San Fernando Valley and is still burning. After nearly four days of burn the fire is 42% contained.

Increasing wildfires, in both severity and frequency, droughts, flooding rains in other parts of the country; more frequent and severe hurricanes, a tornado season that is now year round, climate change is effecting every part of this nation and world.

This is why climate change is the number one issue facing humanity. Donald Trump may be sucking most of the oxygen out of the room and removing Trump from the White House is the top issue in the 2020 election, but climate change is the overwhelming most important problem facing us today. We are past various tipping points, climate change is irreversible, Greta Thunberg told the U.N. General Assembly we were in the middle of the sixth mass extinction — oh yeah, this little study by scientists. It doesn’t come out and name climate change specifically as the cause, but it does say “The loss of biological diversity is one of the most severe human-caused global environmental problems. Hundreds of species and myriad populations are being driven to extinction every year …”

Climate change is the number one human-caused global environmental problem. Add the destruction of habitat and over consumption of resources it is clear the planet is in a severe situation.

That study also said, “In the last few decades, habitat loss, overexploitation, invasive organisms, pollution, toxification, and more recently climate disruption, as well as the interactions among these factors, have led to the catastrophic declines in both the numbers and sizes of populations of both common and rare vertebrate species.”

The study says that humanity is at risk, that because of this mass extinction, which is happening at a much faster rate than the previous five mass extinctions, humankind could be, most likely will be, one of the species wiped off the planet.

Consider how much of this nation has been given over to human population, in living, industrial and farming space. We have chosen not to live in harmony with the planet, but instead to destroy it. President Orange Face is tearing away the protections in EPA regulations, allowing the air, water and land to become even more polluted. You know the shit has hit the fan when carmakers say they want the auto standards set by California, rather than do away with them as Orange Face has tried to do.

The Baby Boom generation and the two or three following it have failed the planet. Young people are mobilizing around the world to force the world leaders to address these problems. Greta Thunberg sailed a boat across the Atlantic Ocean to address the U.N. and she said, “You have stolen my dreams and my childhood with your empty words. And yet I’m one of the lucky ones. People are suffering. People are dying. Entire ecosystems are collapsing. We are in the beginning of a mass extinction, and all you can talk about is money and fairy tales of eternal economic growth. How dare you!

“For more than 30 years, the science has been crystal clear. How dare you continue to look away and come here saying that you are doing enough, when the politics and solutions needed are still nowhere in sight.”

Today on Indigenous People’s Day, we should remember this: Our planet is dying and so is our species. We have to end our use of fossil fuels, rearrange the way we use the lands and waters for our farming, and stop polluting the planet with our industries. For more than 40 years science has been telling us this is unsustainable and we did next to nothing. We should have adopted a Green New Deal 30 years ago.

Now it is too late for many things, but maybe there is still hope.

Top photo of waves crashing over the wall at La Jolla Shores Beach in San Diego, CA
by Tim Forkes 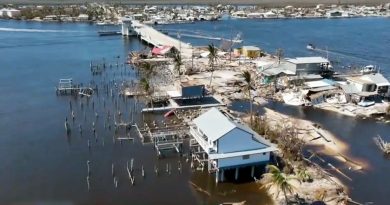 The Dumb and Dangerous