In the style of Republicans everywhere, the Trump Administration has put restrictions on who will get those stimulus checks. Cut out of the mix: seniors on Social Security that don’t file tax returns. If they want a check they will have to file a “simple” tax return and send it in. What fuckers. Seniors on social security aren’t the only ones Trump wants to screw out of a check.

Remember at the beginning of March when people were comparing just over a month of the coronavirus to the year-long Swine Flu epidemic? Making COVID-19 somehow much less serious than was being predicted at the time. Well, as of Wednesday, April 1: 204,637 infected, 4.502 deceased. Someone on Facebook said, “Why don’t you post how many have recovered?” Okay, 8,745. For every person that has recovered, there are 23 who still have it. On March 30 I posted that 155,375 were diagnosed and 2,810 had died. That’s a jump of 49,262 cases, and 1,692 deaths. Over 500 people per day are dying of this pandemic. Well, on Wednesday, April 1, over 950 people died in the U.S. Not just the old and infirm, people of all ages and health backgrounds. No one is immune. 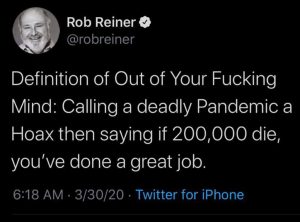 Now Trump is almost gleefully telling us that if only 200,000 die from this disease, it will be a “win.” Seriously. The CDC has said that with the entire country properly mitigating the disease, i.e. universal stay-at-home order, proper social distancing, etc., we should expect 100k to 240k deaths as a result of COVID-19. That’s if every state takes this pandemic seriously and several are not. Without every state and territory taking steps to mitigate the spread of the coronavirus the death toll could be 1.5 million to 2.5 million.

The scary question is: how many of those getting infected and dying will be health care workers? New York has a shortage of health care workers now and is recruiting the recently retired and new doctors and nurses at the ends of their residencies. New York EMT’s were told not to bring patients to the hospital if they did not have a pulse. They would have little or no chance of being revived. Doesn’t matter what the cause, just don’t bring them to a hospital.

There was a movie with Jude Law, Rachel Wiesz and Ed Harris called Enemy at the Gates. In the beginning we see Soviet officers threatening to kill any Soviet soldiers not willing to charge on the German lines, whether they had weapons or not. Of course some of the Russian soldiers were killed by not-so-friendly fire. But the scenes of those soldiers rushing into the maw of the German machine guns and mortars was dramatic.

You know where I’m going with this. Are we sending health care workers into the maw of the pandemic knowing a large number of them won’t survive? We don’t have enough of the basic equipment: the masks, gowns and gloves for all of them. Some workers in New York City were using Yankees ponchos in place of gowns … 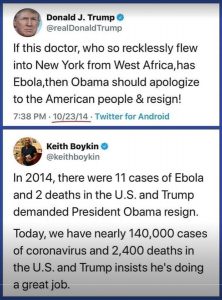 Trump is now saying COVID-19 is vicious. A month ago he said it was just a flu and recently said no one could have predicted this. Since January experts were telling Trump this was going to happen. Bill Gates predicted it after the Ebola crisis. At a security conference in Much in 2016, Gates said, “Whether it occurs by a quirk of nature or at the hand of a terrorist, epidemiologists say a fast-moving airborne pathogen could kill more than 30 million people in less than a year. And they say there is a reasonable probability the world will experience such an outbreak in the next 10 to 15 years.”

Recently Trump said he was told we should just do nothing and just ride out the pandemic. “Ride it like a cowboy.” Who talks like that about a pandemic that is (as of now) killing more than 500 people every day? The same guy who decides not to open the Affordable Care Act marketplaces because … no reason really, other than the nickname for the act has Obama’s name in it.

Funny note: President Trump and Senate Majority Leader Mitch McConnell are blaming the impeachment for the slow response to the coronavirus crisis. That was over February 5 and it didn’t keep Trump from his golf outings and campaign rallies.

Florida governor Ron DeSantis just issued a blanket stay-at-home order — finally. This after the entire world saw the beaches of his state packed with revelers in mid-March. Now they have close to 7,000 people diagnosed with the disease and about a dozen dead. There are two cruise ships circling off the coast of Fort Lauderdale waiting to dock at Fort Everglades. Several people have died from COVID-19, others are sick. Governor Ron doesn’t want them in his state even though arrangements have been made to take care of all the passengers, living and otherwise.

Georgia’s governor, Brian Kemp, the one that had to cheat to win with draconian voter suppression laws, announced a stay-at-home order on Wednesday because — get this — he just found out people that are asymptomatic can spread the disease. “What we’ve been telling people from directives from the CDC for weeks now that if you start feeling bad stay home — those individuals could have been infecting people before they even felt bad. Well we didn’t know that until the last 24 hours.”

The rest of the conscious world knew it when the coronavirus was still just in China, but somehow that information escaped Governor Kemp? There’s a meme on Facebook that says, “The only thing we have to fear is fear itself. And stupid. We need to be very afraid of stupid.” The people of Georgia need to be very afraid.

California is getting high marks for our governor (Gavin Newsom) quickly taking action. Early on there were limited restrictions and then shortly after that a blanket stay-at-home order. A couple weeks ago the various law enforcement agencies started blocking access to the beaches after scores of people were seen congregating on warm days. But the other fact that makes California different than New York is the topography. Long criticized for its sprawl, the wide-ranging contours of Los Angeles that spreads people out has slowed the spread of COVID-19.  High density areas like West Hollywood have higher rates of the disease than other areas.

In the Golden State, as of April 2: 9,937 diagnosed, 215 deceased and 60 recovered. I will continue to isolate at home, occasionally going to Costco or the local Mexican place drive-thru.

About 15 states still do not have stay-at-home orders … in a country where we can still fly — or take the train — anywhere. The governor of Texas wants to block people from New York and New Jersey from entering his state. That’s almost understandable. Those Yankees fans are the worst. But trying to stop people from two states from entering Texas doesn’t really do anything. COVID-19 is already in the Lone Star State and it will spread. Watch Houston, Dallas-Fort Worth, Austin and San Antonio. El Paso may become a hot spot. Texas just issued a state-wide stay-at-home order as this was being published.

Senator Ron Johnson of Wisconsin — Republican — wrote an op-ed for USA Today telling President Trump to open up parts of the American economy because, well, you know, “Every premature death is a tragedy, but death is an unavoidable part of life.”

This on the same day the new jobless rate was published: 6.68 million jobless claims this past week. That’s just under 10 million in the past two weeks and everyone agrees we’re just at the beginning of this crisis. Not to mention experts, like Dr. Anthony Fauci, predict there will be another surge in the virus when people start going back to work.

Johnson needs to be reminded: Trump hasn’t shut down anything. It’s been on the governors to shut down their states. How many will prematurely start sending people back to work? Governor Andrew Cuomo said his state expects to see a high number of deaths in his state through July.

The experts, like Dr. Fauci, say the best case scenario for this pandemic in the U.S. is 100,000 to 240,000 deaths. That’s if we do everything right, like a nation-wide shut down and providing for all the necessary equipment to fight the coronavirus.. Since we’re not doing everything we can, states are having to compete with one another for very limited supplies and there is an uneven patchwork of stay-at-home orders around the nation, we should expect at least one million deaths when COVID-19 runs its course. Dr. Fauci also said, “This is going to get much worse before it gets better.” He would know.

We still need wide-spread testing, everywhere in this country. We should at least get that done. and for your sake and mine, stay at home.

House of Representatives set to vote on Trumpcare 2.0

Whistleblower acted in good faith, according to acting DNI