It’s fitting that the Dodgers last pre-season game ended in a 6-6 tie. They were playing the L.A. Angels of Anaheim, another 2014 post-season team.

It was Kiki Hernandez who tied it up for the Dodgers, sending a towering solo homerun to centerfield that got the crowd in Dodgers stadium stomping their feet. But just minutes after the game Hernandez was optioned to triple A with two other excellent players.

The question is: have the Dodgers improved their chances of making it to the World Series this year? They are putting a lot of faith in Rookie Joc Pederson, the young player they brought up from the minors late last year. On Saturday Pederson committed several errors, but he played great in spring training, batting .368 and hitting six homeruns. Pederson will be the Dodgers every day starter in centerfield.

That’s three left-handers in the outfield, which won’t be a big difference in the field, but it may prove to be a benefit at the plate. All the Dodgers outfielders can hit and score runs.

The starting rotation is set. Clayton Kershaw and Zack Greinke will still be the anchors of the rotation, but their number three pitcher, Hyun-Jin Ryu is on the disabled list. So the Dodgers have made some adjustments to their rotation. Brett Anderson is looking really good for his regular season start later this week in Arizona.

Most everyone agrees their infield has improved with the addition of Howie Kendrick and Jimmy Rollins. They are expected to make an impact in the field and at the plate right away. As it turned out, the trade looked like the deal of the century after Monday’s game.

The last big question for the Dodgers is this: do they have a good, consistent bullpen. Kenley Jansen is on the disabled list, so they don’t have a definite closer right now. But they have Pedro Baez and he’s been pitching very well. When the ninth inning came on Monday, the Dodgers had a closer.

J.P. Howell is another left-handed pitcher, who has 20 saves to his name and an ERA of .394. The bullpen looks like it has been improved, but real games will tell the difference.’

This first game of the season featured two pitching aces, James Shields for the Padres and Clayton Kershaw for the Dodgers, facing off in front of a capacity crowd. The game started early in the afternoon and the visiting San Diego Padres got on the scoreboard first when Matt Kemp, once an outfielder for the Dodgers, singled to center, sending Wil Myers across the plate. But that would be the only run the Padres would score off Clayton Kershaw, the Cy Young Award winning starter of the Dodgers, until the top of the fifth inning when Kemp doubled to left, bringing Clint Barnes and Derek Norris home.

Those would be the only runs scored by the Padres, but it looks like the trade for Kemp was a smart move by San Diego G.M. A.J. Preller. Before he swung the bat against his former team, the crowd at Dodgers Stadium gave the former Dodger a standing ovation and Kemp acknowledged the love by tipping his batting helmet to the crowd. After Monday’s game the L.A. fans probably won’t do that again.

The Dodgers scored on San Diego Starter James Shields in the 4th inning when Adrian Gonzalez homered to start the inning and Carl Crawford doubled to right-center, scoring Howie Kendrick. For a brief time the Dodgers had the lead.

The score stayed 3-2 for the Padres until the bottom of the 7th when Kendrick doubled to right-center off of Padres reliever Nick Vincent, scoring Gonzalez and tying the game. Then, with Shawn Kelley pitching for San Diego in the bottom of the eight Jimmy Rollins hit a 3-run homer that proved to be the game winner. The final score was 6-3, L.A. Dodgers. Joel Peralta got the win for the Dodgers and Chris Hatcher got the save.

Both teams have improved this year. The Padres got Matt Kemp from the Dodgers last winter and he has proven to be a big asset to their lineup. Before the game Kemp was asked how it felt to be in the other dugout in Dodgers Stadium, “Weird,” he answered. Was he reminiscing about his days with Dodgers? Yes, but, “It’s just like any other opening day; I’m opening in Dodgers Stadium so it’s nothing different, just got a new jersey and a new team. I’m just excited to be here,” he said with a smile.

The Dodgers traded for Jimmy Rollins and Howie Kendrick during the Winter Meetings and in the home opener they have contributed to the Dodgers first win of the season. Kendrick hit a triple and a double and was the pivot in two double plays in the final innings to keep the pitchers, Peralta and Hatcher, out of jams. And of course Jimmy Rollins put the Dodgers ahead with his three-run blast.

It was a good way for the Dodgers to start the season. 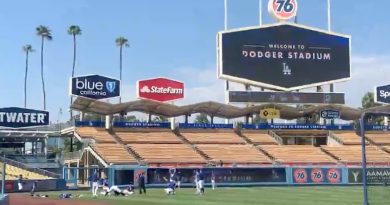