You’re bound to get the same old themes with sports films. “Love of the game,” “perseverance,” “faith,” etc. rarely are left out, especially in American football films of the past few decades. Following in its predecessors’ footsteps (Remember the Titans, The Blind Side, and Friday Night Lights, just to name a few), When the Game Stands Tall unflinchingly embraces the sportsmanship and humanity that we expect as an audience. Based faithfully on Neil Hayes nonfiction book, the film unfortunately sets up stakes and urgency that are never earned.  Emotional blackmail from the director and a limp script from the writer pair poorly in a film that never quite adds up to much of anything, save for some exciting football scenes.

De La Salle High School in Concord, California rose to fame thanks to its powerhouse football team, the Spartans. With the leadership of Coach Bob Ladouceur (Jim Caviezel) and Assistant Coach Terry Eidson (Michael Chiklis), the team gained recognition for what was called the Streak: a 151-game winning streak by a single team that stretched over an incredible thirteen years. In 2004, that streak ends in a soul crushing defeat on the first game of the new season.

Team captain Chris Ryan (Alexander Ludwig) and his teammates struggle to regain the confidence to continue the season after such humiliation, Ryan in particular due to the incredibly high expectations placed on him by his helicopter dad (Clancy Brown). Coach Ladoucheur faces the challenge of leading his team with humility and faith, but must simultaneously balance an uneasy family life with a loving wife (Laura Dern) who simply does not get any time with her husband.

The structure of this film has major issues. The nonfiction source seems to have been left untouched by writer Scott Marshall Smith (Men of Honor, The Score) and subsequently leads to several huge plot problems in terms of build and conflict. The first forty-five minutes (FORTY-FIVE) of the two-hour movie serve as lead up and exposition for the fated game. This late strike of conflict destroys all focus and makes the characters’ issues much less impactful.

Any smaller complications that arise along the way as subplots simply distract and confuse the plot. Even worse, some resolve themselves within five minutes, ultimately not serving the dramatic build. And even worse than that, some simply disappear entirely never to be mentioned again. To top it off, the climax of the film is misplaced. The last twenty minutes could and should be cut from the film entirely and instead create an anticlimax right after a clear dramatic apex has been achieved.

The pleas for the audience to give their tears disconcerts even more so however. The team travels to the veterans’ hospital, the coach experiences a significant shock in his life, and even more spoiler-y plot points occur that could serve the film to provide insight into the team’s mindset coming into each game, but instead are handled by director Thomas Carter (Swing Kids, Coach Carter) as emotional traps, thanks to an inappropriately soaring score by John Paesano (The Maze Runner) and unsubtle reactions of “realization” from his characters.

Carter handles the football sequences quite well however, using slower sound bites to show impact and injury effectively. And his work with his actors overall seems to have overcome some unabashedly clichéd lines from Smith.

Caviezel instills intensity into every word he utters, which works against him. He concentrates so intently on his whispered delivery, his character becomes one note throughout. Chiklis and Dern do their jobs well here, but because their characters’ arcs are so choppy, their motivations and relationships never mesh well into the film. Ludwig still needs some time develop into the actor he has the potential to become, but like most of the other young actors here, he comes across flat.  Especially next to Ser’Darius Blain and Stephan James, who maybe give the most impressive performances here as two recent graduates of De La Salle. But because their chemistry together succeeds so well, their scene feels pasted in from another movie when compared to everyone else’s mediocre work. But Brown has drawn the short straw here, being given more of a Disney villain than a complex antagonist with which to work.

The success of other, better football-themed films lied in a well-framed story that never pandered to its audience. The well-drawn characters never had a third-party agenda to push and instead stood out as individuals in an ensemble the size of a … well … football team. When the Game Stands Tall does not trust its audience enough to take away their own meanings from this story and instead forces an emotional reaction to an annoyingly noticeable point. Even if the framework were firmer and the ensemble stronger, no one wins when emotional rulings are dictated so strongly.

(All photos are screen shots from YouTube, unless otherwise noted)

Mark McCarver was born and raised in Houston, Texas and has been involved in theater and film since he was a kid. He spent the past few years acting and directing across Texas before moving to Washington, DC in the fall of 2012 to get a taste of the East Coast’s entertainment industry. Mark holds a BA in Drama from Trinity University and trained at the Syracuse University – London Drama Program and Shakespeare’s Globe. He is a company member with Half Mad Theatre in Washington.

‘Jumanji: The Next Level’ is a worthy sequel 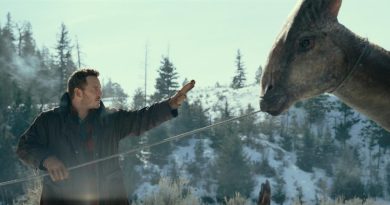 Tenderness defines The Fault in Our Stars