Tis the season … to watch holiday movies! With Thanksgiving behind us, it is now socially acceptable to finally watch those movies that we have been itching to watch for months now.

Every Thanksgiving my family and I finally scratch that itch and begin binging on all of our favorite holiday flicks. There are so many great holiday movies out there that it is hard to remember them all, and some can be pretty hard to track down.

I want to start spreading the holiday cheer by sharing not only my personal favorite holiday flicks, but also how you can find them.

We have the holiday classics that first come to mind when thinking of holiday movies. In fact, most of these films tend to be played continuously on cable and network television between Thanksgiving and New Years. However if you are dying to watch one of them and cannot find them on your TV (or you don’t have cable), here are some of the best and how you can find them.

A Christmas Story is obviously an ultimate classic, so much so that TBS used to play it for twenty-four hours starting on Christmas Eve. However if you cannot find it on your television, it is also available to buy or rent on iTunes, Redbox Instant, or Amazon Video.

Who better than Kevin McCallister to wish you a Merry Christmas?! You can find both Home Alone 1 and 2 on iTunes to buy/rent, or on Amazon Video to enjoy with the whole family.

The classic Miracle on 34th Street and its remake can both be found to rent or buy on iTunes, and on Amazon Video. The same goes for the dark comedy remake of A Christmas Carol, Scrooged, which stars comedy legend Bill Murray.

Holiday and comedy classics, Christmas Vacation and Trading Places, can both be found on Amazon Prime, Netflix, or to rent or buy on iTunes!  Who wants to miss out on spending the holiday season with the Griswalds or Louis Winthrope III?  Not me!

Two holiday classics that can be a bit tricky to find but are still well worth watching, are It’s A Wonderful Life and The Gathering.

A more recent holiday flick that will forever be an all time classic is Elf. Buddy the Elf can only be found to buy on iTunes, or on Redbox Instant.

While this one is often played over and over again on television, I suggest you at least get yourself a digital copy because who knows when you will need that dose of holiday cheer.

The ever popular, The Santa Clause films 1-3, are not as easy to find as you would think. While you will see these films all over TV this holiday season, finding them when you need them can be rough. 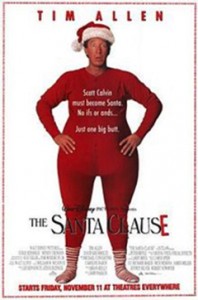 You can find the amazing Tim Allen playing a modern day Santa Claus only on Amazon Video, however you can also find the third one for purchase iTunes.

The Nightmare Before Christmas, Jack Frost, and Jingle All the Way are a bit easier to find. All three are available for rental or purchase on iTunes as well as Netflix.

Some holiday flicks that are only available on iTunes are Die Hard, While You Were Sleeping, and A Christmas Carol (starring Kelsey Grammer). However the following films are available on both iTunes and Amazon Video:  Mixed Nuts, The Holiday, Look Who’s Talking Now, Little Women, The Family Stone, The Family Man, Four Christmases, and Just Friends.

The Netflix fanatics out there are thanking their lucky stars this holiday season because Love Actually is finally available to stream for your viewing pleasure!

As we all know, this plethora of films is only the tip of the iceberg in regards to holiday flicks. I hope I have jogged some of your memories so you will start the holiday season off right. Enjoy and Happy Holidays!

All photos via Wiki Commons, unless otherwise noted.

Sam Davidson is a graduate of The University of Southern California, but is a Midwest girl at heart. Davidson is a true television and film fanatic, with an appreciation for all different genres and formats. Sam’s love of television and film started at a very young age, so much so that as a child she had a portrait of Lucille Ball hand painted on her bedroom wall. Currently working in television production and development in Los Angeles, Sam always makes time to watch and appreciate all of her favorite shows and films!

Merry Christmas to everyone

Christmas shopping for the perfect gift