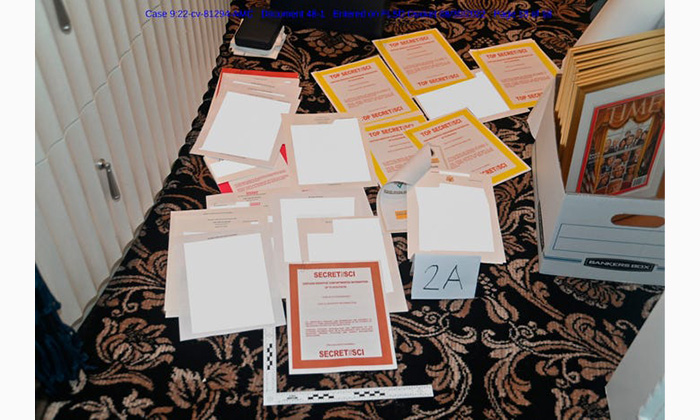 So, because he is a former president Donald Trump isn’t in custody for A) inciting an armed insurrection on January 6, 2021, and B) violated the Presidential Records Act by taking nearly 200 classified documents to his home.

Let’s be real. With his secret service detail there is no way a former president can sit in a jail cell. But they can severely control his movements and contact with other people with the Secret Service and U.S. Marshalls. A former president — and possibly his or her family members — would have to be segregated to keep them safe.

That issue aside, were any of us regular folks caught with top secret material we would be in custody — in a jail — with a hefty bail. Sandy Berger was Bill Clinton’s National Security Advisor. After it was found out he was stuffing classified documents in his pants, socks and wherever else he could possibly hide stuff he was charged with unauthorized removal and retention of classified material. Berger took a deal, admitting he did take classified documents from the National Archives and cut them up with scissors.

Back in June the U.S. Supreme Court officially took rights away from women and one of the Supreme Court justices that voted to strip those rights from women, Clarence Thomas, suggested the same minority of Americans should go about trying to take rights away from gays, and the right to purchase and use contraception. But that news was pushed to the back pages of our news feeds.

Senator Lindsey Graham has warned — or threatened — there will be “riots in the streets” if Donald Trump is prosecuted for the crimes he has  — allegedly — committed. We have almost forgotten what an anti-Trump Republican he was until November 6, 2016.

After Trump won the Electoral College Graham couldn’t twist fast enough or deep enough to become a Trump brown-noser. The senator knows how much Donald J. Trump loves his seditious, white supremacist base, so Graham wanted his cult master to know he was on board.

Now, thanks to Senator Graham I learned a new word: Paralipsis. It means, “the suggestion, by deliberately concise treatment of a topic, that much of significance is being omitted, as in “not to mention other faults.”

After a number of people publicly called out Graham for his violence boosting rhetoric, he got in front of some cameras to try to walk back his comments. “I wasn’t threatening violence. I’m against violence, but …”

What we do know about the whys and wherefores of the Justice Department’s legal search of Trump’s residence at his golf club in Palm Beach, which is, admittedly, not a lot, former President Donald J. Trump has committed crimes that are at least as severe as the charges Sandy Berger faced roughly 19 years ago. He stole documents that belong to the U.S. Archives.

It might be more difficult to prove Trump’s actions were in violation of the Espionage Act, but if the DOJ can  prove he is guilty it seems they will prosecute Mr. Trump.

The extent Trump went to hide the stolen documents, by taking them out of their folders marked “Top Secret” and mixing them in with documents that are not classified, seems just like the idiotic thing Donald J. Trump would dream up.

Surveillance video shows people moving boxes, changing boxes the records were in. And of course Trump had been destroying documents. All of which indicates consciousness of guilt.

The Trump crowd had been trying to avoid giving the DOJ all the documents Trump had stolen from the White House, which is why the DOJ obtained a search warrant. Apparently, someone inside the Mar-a-Lago crew has been giving the FBI information on what the ex-president was trying to hide. A conspiracy to conceal classified documents that had been stolen.

The photo above was included with the Justice Department’s court filing of why the case didn’t need a third party, “special master” to determine which of the documents were privileged documents between Trump and his lawyers and what documents belonged to the U.S. government.

Some of the documents recovered are so sensitive the FBI had to get agents with the highest clearances to view the documents.

The funny thing about all of this is the Trump team and their fellow sycophants demanded to see the search warrant to prove their cult master was being persecuted … but then that backfired and put Trump in a deeper hole. So they demanded the affidavit used to obtain the search warrant. The DOJ provided a redacted affidavit and then the Trumpers demanded the judge in the case assign a special master and the DOJ provided a 36-page rebuttal to the demand by the Trump attorneys. That document was even more damning to the ex-president As George Conway told MSNBC, the ex-president and his lawyers keep asking the court and DOJ to punch them in the nose so the DOJ acquiesces.

It turns out the FBI found documents all over Trump’s residence, including his “office” and bedroom, not locked away in a secure room or safe. In fact, some of the boxes of documents were found in common hallways used by guests of the resort. And there were three classified documents in Trump’s desk.

I just went to Trump’s website and on the splash page he has a welcome statement that says, and I kid you not, “The Office of Donald J. Trump is committed to preserving the magnificent legacy of the Trump Administration, while at the same time advancing the America First agenda.”

.So, he and his acolytes think the ex-president’s legacy is magnificent. If and when Trump is indicted for this, and/or his culpability for his part in the January 6 2021 insurrection, we will see what is magnificent — Trump or the Department of Justice.

Oh — while this has been going on President Biden and the Democrats passed several bills, one for some gun safety laws and a sweeping bill to combat the climate crisis, strengthen health care and tax bill that attempts to get big corporations and the 1% pay their fair share. The sweeping bill was passed along party lines. As a result President Biden said, “Every single Republican in the Congress sided with the special interests in this vote.”

This is the actual last thing. Because at least two of Trump’s attorneys signed a letter to the DOJ claiming Trump and his representatives had given the Feds all the classified documents in Trump’s possession which is a crime itself — those attorneys are either guilty of lying to federal officers, or they are witnesses against the person who told them all the documents were returned. So now MAGA stands for: “Make Attorneys Get Attorneys.”

This just in: The Trump lawyers submitted  a document that was supposed to rebut the DOJ’s 36-page document. At least one of the lawyers that represent — or used to represent — Donald J. Trump could find themselves facing obstruction of an investigation charges. There he goes again, Making Attorneys Get Attorneys.

I hope someone makes a several season show about the Trump years for Netflix.  It would be very entertaining. 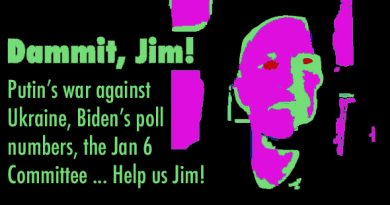