As you may have heard, the Wednesday drawing for the Powerball Lottery did not have a winner. A half a billion dollars that stayed put for another drawing.

Now, the next drawing is here and the jackpot is officially $800 million — and it continues to grow until the drawing tonight. Think about that: over three-quarters of a billion dollars. But if you win and take the single payment you don’t get all of it, but you would be a multi-millionaire of great proportions.

Per CNN Money, if you opt for the cash payout instead of the 30 annual payments, the Powerball will actually pay you $496 million. And then you have to pay taxes on that amount. The feds will take 25 percent up front and then at tax time you have to pay the remaining amount to equal 39.6 percent. That’s a total of $196.416 million. In other words, you’ll have almost $300 million after the feds take their cut.

But then, here in California, you’ll have to pay state tax, which is 12.3 percent. That’s just over $61 million. What you’re left with, after the penalty for taking the cash payout and paying federal and state income taxes is roughly $238.6 million.

Man, hardly worth the $2 investment it takes to get one Powerball pick … well, it’s still a large sum of money, enough to get the home in Malibu , Holmby Hills or Bel Air in the L.A. area. Or Newport Beach, Dana Point and San Clemente in Orange County; La Jolla or Rancho Santa Fe in San Diego County.

But wait — when the $900 million Powerball was won a few years ago, three tickets hit the jackpot, which means it was split three ways. That’s right: if two or more people hit the jackpot they will share that winning jackpot. So, if three people split this one you would get about $80 million.

Now this is really getting to be a real downer. There goes the house in Bel Air. But, you can still afford one Ferrari. And to make this a real downer, there is this little fact: your chances of winning are 1 in 292 million.

Because the Powerball jackpot could be $900 million again (it keeps growing) before the drawing tonight and even if you had to split it with other winners, you’d still be a multi-millionaire and at least for a little while, part of the one percent.

And get this: one person in California hit all five numbers, but not the Powerball (17) on Wednesday. That person was paid over $1 million. There is that.

You’re buying your Powerball tickets anyway, so the most important advice from every money-centered publication and Cal Lotto: sign the back of your Powerball ticket the moment you buy it. If it’s lost or stolen then whoever redeems it — with their name on the back — gets the money. If you sign it and lose it, the finder cannot redeem it and Calottery will come looking for you. Hopefully.

If there are no winners in tonight’s drawing, it could be over a billion dollars next Wednesday. Wouldn’t that be exciting?

Have some fun with it, don’t have any expectations. You never know, you might be in for a nice surprise. You have until 7:00 p.m. Pacific Time to buy your tickets.

Five tickets sold in California matched the five numbers, and they were sold in Fremont, Stockton, Nice, Dana Point and Mountain Pass, plus another in Primm, Nevada. They paid $779,264 each.

For the Wednesday, January 13 Powerball drawing, the jackpot will be worth $1.3 billion dollars, a new record for lotteries.

Photos by Tim Forkes, the top photo is a screenshot from Calottery.

Sherpa Fire is now in a state of emergency 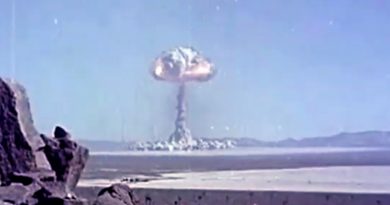 Taking Note of a Few Things: The Nuclear Option

Hard Knocks with the Rams