As everyone has read by now, the author Tom Wolfe passed away. He was 88 years old — old enough to be my father. He changed journalism and non-fiction at the same time Hunter S. Thompson was putting his spin on non-fiction. Compare Hell’s Angels: The Strange and Terrible Saga of the Outlaw Motorcycle Gangs to The Electric Kool-Aid Acid Test and there is a difference in style — magnificently different — yet both represent a new style of journalism and non-fiction writing. Reading Wolfe’s books was like reading a novel.

Thompson inserts himself into the the story sharing a first-hand experience and understanding of how and why the bikers exist. This was well before the organized crime of the Angels became their main storyline; the book was published in 1966.

Wolfe on the other hand, went into exquisite detail about the subjects of his book, Ken Kesey (himself a great author) and his Merry Band of Pranksters. Wolfe was not a part of the story, but his “as if first hand” account of the Merry Pranksters’ exploits put the reader on the bus (so to speak) with the group as it laid the foundation of the West Coast hippie experience. They were a new religion and Kesey was the new Messiah. Wolfe’s book was published in 1968.

Both books were published during the 1960’s counter-culture revolution when young people were turning on, tuning in and dropping out, to paraphrase another icon of the 60s, Dr. Timothy Leary. And that was the only similarity between the two authors.

Wolfe wrote so many books it would be a bore to list them all here. For a complete bibliography go to his Wikipedia page. I read three of them: The Electric Kool-Aid Acid Test, The Right Stuff and Bonfire of the Vanities, his first novel. The topics were very different, but the underlying theme was that of something new happening. In the Acid Test it was the birth of the 1960s counter culture, in The Right Stuff the birth of the U.S. space program and in The Bonfire of the Vanities the new Wall Street where the scions of banking and money marketing became legends in their own minds as well as thousands of young business graduates hoping to be “Masters of the Universe” too.

With his 17 books and many, many articles Thomas Kennerly Wolfe was a fount of important, or at least entertaining, information. Maybe too much for the average reader to absorb. Having read only three of his books, maybe I’m below average.

When The Bonfire of the Vanities was published in 1987 we already knew the Wall Street masters were assholes; most of them openly supported President Ronald Reagan and his anti-regulation philosophy that brought about so much financial catastrophe for the many but great financial excess to the few. Reagan wasn’t good for business, he was good for the business leaders. So it was an entertaining treat to see one of them get crushed by events and circumstance.

The actor Michael Douglas said he and writer/director Oliver Stone were shocked to find out young business graduates idolized the fictional character of Gordon Gecko, who was based on Boesky a real life character who actually told business students at UC-Berkeley, “Greed is all right, by the way. I want you to know that. I think greed is healthy. You can be greedy and still feel good about yourself.”

Wolfe’s character, Sherman McCoy, is completely broke, divorced and despised by his wife, daughter and mistress and about to go on trial for vehicular manslaughter. Milken and Boesky each spent 22 months behind bars and then lived lavish lifestyles once they got out. Both are living happily ever-after, although Milken is under constant scrutiny. But like Gordon Gecko, the lifestyle and business activities in Bonfire were applauded by Wall Streeters and business students. Greed will always have it’s appeal, as the current president is demonstrating, or at least the various investigations of him and his cronies are demonstrating.

Apparently there is one more similarity between Hunter S. Thompson and Tom Wolfe: they both scratched and dug at the slimy underbelly of elite society. Had I read any of Wolfe’s other books, maybe that connection would have been obvious before writing this blog.

Tom Wolfe was an astonishing character himself. He wore all white suits, an idiosyncrasy — a vanity — he was pleased to see mocked on The Simpsons TV show. He was a literary elite who mocked elites, a man of letters that made the art of writing look pretty damn easy. These barely 900 words took most of eight hours to craft. I would hope Tom Wolfe was more efficient, but my guess is he was far more meticulous.

Every day he would dress in his customary white suit and tie to write — to write — another vanity maybe, or a part of his discipline more probably, and it worked for him. I, on the other hand, sit in cargo shorts and black T-shirt, a nod to Jerry Garcia maybe, who wore black T-shirts when he got on stage with the Grateful Dead.

The Dead have a connection to Wolfe through the Acid Tests; they became the “house band” for the events when they were held at Ken Kesey’s estate. And they were connected to the Hell’s Angels for much the same reason, which ties the Dead to Hunter S. Thompson — four degrees of separation between Wolfe and Thompson. One actually. Both Thompson and Wolfe were frequent contributors to Rolling Stone magazine, which is how I can to read The Right Stuff and The Bonfire of the Vanities. Both were serialized in the magazine before being published in book form.

Like Kesey, Garcia and Thompson before him Thomas Wolfe leaves this world a better place, and still alive with the body of work left behind.

Tom Wolfe had the “Right Stuff” — “There is no motivation higher than being a good writer.”

Top photo is a YouTube screenshot of Tom Wolfe on the TV show, “The Firing Line,” in 1975 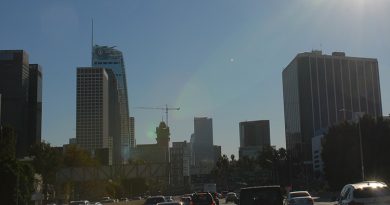 Simpsons Marathon: Get off the couch? Unpossibe!

Ronald Reagan and his fat cats were a prelude to Trump