The only “conservatives” running from Donald Trump are the ones that need to reach out to voters for re-election or the ones that have been running away from Trump for months already. Every day Donald Trump confirms every reason they have for not supporting the nominee of their party, for disavowing their party’s presidential ticket, and in some cases, endorsing the Democratic ticket of Hillary Clinton and Tim Kaine.

Senators John McCain and Jeff Flake of Arizona have withdrawn their endorsements, Speaker of the House Paul Ryan dis-invited Trump from a campaign event in Wisconsin — the Trump Campaign said The Donald was preparing for Sunday’s debate and Trump’s running mate Governor Mike Pence of Indiana was supposed to attend in Trump’s place, but the Indiana governor cancelled.

Rob Portman of Ohio withdrew his support Saturday, Action star and former Governor of California Arnold Schwarzenegger tweeted, “As proud as I am to label myself a Republican, there is one label that I hold above all else — American.” And he added a bigger statement as an attachment.

Former Secretary of State Condoleezza Rice posted on her Facebook page: “Enough! Donald Trump should not be President. He should withdraw.”

As the New York Times said in the headline to its most recent editorial comment on Trump, “The Sleaziness of Donald Trump.”

A tape was revealed by Washington Post reporter David A. Fahrenthold that has Trump making lewd comments about women, the worst being that he believed he was allowed to assault women because he is a celebrity. “When you’re a star they let you do it. You can do anything.”

He also bragged about hitting on a married woman, a co-host of his beauty pageants. He then tried to have this woman fired because she was pregnant.

The recording is from 2005, shortly after he married Melania — and his new wife was pregnant at the time.

Trump was speaking to Billy Bush, who was a host for Access Hollywood at the time. Now he is a co-host of NBC’s Today Show, at least he was as of Friday. Bush has issued an apology of sorts, saying, “Obviously I’m embarrassed and ashamed. It’s no excuse, but this happened 11 years ago — I was younger, less mature, and acted foolishly in playing along. I’m very sorry.”

Well that may not be enough to save his job. Bush did in fact engage in the conversation with his own lewd comments. Don’t be surprised if there’s a new face taking his place Monday morning.

The Trump Campaign replied, “This was locker-room banter, a private conversation that took place many years ago. Bill Clinton has said far worse to me on the golf course — not even close. I apologize if anyone was offended.”

He did issue another apology, but like he has done with so many appalling things he’s said over the past few months, he deflected the focus onto Hillary and Bill Clinton, trying to blame them for what he said.

Gene Folkes was a contestant on season 10 of “The Apprentice.” “There were quite a bit of cringe-worthy moments when we were shooting The Apprentice. He often spoke in regards to women as if he was on a construction site haggling women walking by.” According to Folkes Trump was “ indiscriminate” about which women to harass: married, single, it didn’t matter. And he would often — always — ask the male contestants if they would have sex with female contestants.

The AP also interviewed people who claim Trump wasn’t inappropriate during the taping of the show.

To her great credit MSNBC host Rachel Maddow has pressured her employer, NBC, to release whatever behind-the-scenes video exists of Trump on “The Apprentice” so voters can judge for themselves if the GOP candidate was inappropriate or not. NBC referred everyone to the production company, Mark Burnett Productions, which has blown off all inquiries with literally no comment — no replies.

This is whom the Republican Party has nominated for their presidential candidate.

On Friday Trump’s running mate, Indiana Governor Mike Pence, told an Ohio crowd, “It’s kind of fun to watch sometimes!” Then, after Trump’s non-apology he said, “When he does his talking, he doesn’t go tiptoeing around all those thousands of rules of political correctness.”

That’s right Governor Pence. He just says whatever misogynistic, xenophobic, racist and fascist thing that pops into his head.

Pence told the crowd, “This time we got another thing, another issue that’s come forward. Then they turn on the television the next morning and Donald Trump is still standing, stronger than ever before and fighting for the American people. And he’s going to fight all the way to the White House.”

But then on Saturday Pence issued a more formal comment. “As a husband and a father I was offended by the words and actions described by Donald Trump in the eleven-year old video released yesterday. I do not condone his remarks and cannot defend them. I am grateful that he has expressed remorse and apologized to the American people. We pray for his family and look forward to the opportunity he has to show what is in his heart when he goes before the nation tomorrow night.”

In other words, Pence is still supporting the GOP nominee for president, although CNN is reporting Pence is considering leaving the ticket. There are only two campaign stops listed for Pence on the Trump Campaign website.

Trump himself tweeted, “The media and establishment want me out of the race so badly — I WILL NEVER DROP OUT OF THE RACE, WILL NEVER LET MY SUPPORTERS DOWN! #MAGA”

As expected, Twitter was filled with his supporters affirming their loyalty to the candidate. Trump sycophant Rudy Giuliani, who spent a good part of Saturday with the candidate — and a man with a checkered history regarding his infidelities — told the media the rush of Republicans leaving Trump was, “… wishful thinking of the Clinton campaign and those people who have opposed him for a long time.” He added, “It’s basically the insiders against the outsiders, anyway.” The irony being that in the previous three presidential elections Giuliani had been the quintessential GOP insider and hero.

A conservative website — I’ll refrain from naming it — referred to all the Republicans running away from Trump as RINOs — Republican In Name Only. They claim Pence is trying to oust Ryan as Speaker of the House. Well, with a good turnout a month from now the Democrats might do that.

Melania Trump responded with a statement. “The words my husband used are unacceptable and offensive to me. This does not represent the man that I know. He has the heart and mind of a leader. I hope people will accept his apology, as I have, and focus on the important issues facing our nation and the world.”

Giuliani is the guy who suggested Donald Trump was a better choice for president than a woman.

What will Hillary Clinton say in that debate? Should she even participate, considering it gives Trump legitimacy as a viable candidate? Of course she has to be there, show up prepared as expected. Trump has vowed to air the Clinton “dirty laundry” involving Bill Clinton’s extramarital woes. All she has to do is remind the voters Bill isn’t running for president, she is and her opponent is the one with a long history of this type of behavior that is coming to light ever since Trump announced his candidacy.

Many pundits are wondering why these latest revelations are the breaking point? After the debate we can bet there will be more Republicans running away from their candidate. On Saturday the Republican National Committee issued an email to one of its vendors. “Please put a hold/stop on all mail projects right now. If something is in production or print it needs to stop. Will update you when to proceed.”

Reince Priebus, Paul Ryan and the rest of the GOP leadership has a lot to answer for. They created and nurtured the political climate that allowed the crazy right wing fringe to control their party. Now they have to live with it.

And to think neither Preibus or Ryan have withdrawn their support for Trump. What will it take for them to denounce Trump? 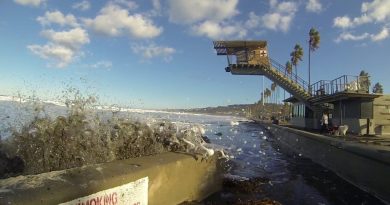 The Grifter Party Will Ignore the Climate Crisis