The president, Donald Trump, can’t even pronounce the word, “anonymous.” But it’s got him so bent out of shape his closest aides are saying he is “volcanic.” At a rally in Montana to promote a Republican candidate for the Senate, the president couldn’t help but be consumed by the New York Times Op-Ed piece entitled, “I Am Part of the Resistance Inside the Trump Administration” by Anonymous.”

Anonymous! The most startling revelation is the number of lawmakers, especially Republicans, who said they knew about everything mentioned in the op-ed, everything in the new book by Bob Woodward. Really? And you haven’t taken steps to remove the guy? Oh yeah, tax cuts and Supreme Court nominees. Gotta keep them priorities straight.

Someone who knew if he — or she— attached a name to this op-ed the story would be why so-and-so would write such an op-ed and invariably end their time in the White House and most likely end their career in Washington. Really, who would hire someone who would go to the failing New York Times and pen an inflammatory op-ed against their boss?

As disconcerting as the title, and the Times’ online graphic for the piece, is the subtitle. You read this and you will know generally what the body of the op-ed is going to say: “I work for the president but like-minded colleagues and I have vowed to thwart parts of his agenda and his worst inclinations.”

His worst inclinations … Jesus, he’s separated families and put children in cages (and hundreds are still in those cages) so how much worse could his inclinations be? Do we really want to know? Maybe not, but maybe we should …

I didn’t really want to know the details of my open heart surgery, especially that morning in pre-op, but the cardiologists and surgeons kept coming in to inform me about how they were going to saw open my sternum, spread the rib cage, clip that artery, snip that vein, attach this attach that. Everybody who knows me knows I never liked watching the TV program “House” because they went into great detail when depicting surgeries. No thanks.

Before I get too far off the trail here, I didn’t want to know the details, but I needed to know the details to know what exactly was about to happen. Obviously I survived, with little effect on my cranial capacities. Long-term exposure to general anesthesia can have deleterious effects on the brain, which can be anything from hallucinations to confusion and memory loss. These are things every patient should know before going under general anesthesia.

Back to Anonymous and his/her op-ed. We probably don’t want to know how much worse the president’s inclinations can be, but we ought to. Along with the op-ed is the publication of Bob Woodward’s latest book, Fear: Trump in the White House, which provides frightening details of “Crazytown,” as White House employees describe Donald Trump’s administration. As if to underscore Woodward’s book (which was announced before the op-ed was published) Anonymous started the op-ed with this little nugget to explain why he — or she — wrote the op-ed: “But we believe our first duty is to this country, and the president continues to act in a manner that is detrimental to the health of our republic.” The piece goes on to state, “The root of the problem is the president’s amorality.”

It gets worse. “Meetings with him veer off topic and off the rails, he engages in repetitive rants, and his impulsiveness results in half-baked, ill-informed and occasionally reckless decisions that have to be walked back.”

Crazytown indeed. The op-ed is worth reading and if you are even half as obsessive as the talking heads on TV, you will be asking yourself, “Who is Anonymous?” Someone in a secret meeting in the Oval Office leaked, to the New York Times, they had a list of a dozen people people they suspected of being the author of the op-ed.

Cable news is obsessed. They are done talking about the content of the op-ed and have now focused on the who. Some of them, like Lawrence O’Donnell of MSNBC put together a pretty good analysis which brought him to Director of National Intelligence, Dan Coats. It’s a good choice too considering the number of times Coats has been undercut and horrifically surprised by the president, once while he was on a live program with Andrea Mitchell of NBC.

But is it Coats? What about Chief of Staff General John Kelly? He has had to lie for the president, lie about a Florida congresswoman and Gold Star Wife for the president; Kelly has had to compromise so much of his integrity for this president, even while the rumor machine has stories of Kelly being on his way out, who wouldn’t blame him for throwing this president under the bus, before Trump kicks him to the curb?

Then there’s Secretary of Defense General James “Mad Dog” Mattis. Like John Kelly, Mattis is a retired U.S. Marine Corps general who finished his career leading troops in Iraq. Mad Dog Mattis, the general who famously — or infamously — told Iraqi overlords in Fallujah this: “I come in peace. I didn’t bring artillery. But I’m pleading with you, with tears in my eyes: If you fuck with me, I’ll kill you all.” Apparently they believed him. There was no more trouble in the area.

He told his troops in Iraq: “Be polite, be professional, but have a plan to kill everybody you meet.”

We know Trump chose Mattis for that nickname and the general’s badass reputation. There are three great U.S. Marines in the past 80 years; Gunnery Sergeant John Basilone, the hero of Guadalcanal, Colonel Chesty Puller, the hero of the Frozen Chosin (Korea) and Mad Dog Mattis, the tough sonofabitch who likes to brawl and once said, “…there are some assholes in the world that just need to be shot.”

Who among us hasn’t said, or at least thought, the same thing? Mattis was talking specifically about the Taliban, we’ve said it about our neighbors, co-workers and other drivers getting in our way on the I-5.

As a Marine you say to yourself, “I like this guy, politics be damned.” So it’s no wonder Donald Trump picked him to lead the Department of Defense. But after 18 months Trump isn’t very happy with Mattis, probably because the good general isn’t about to compromise his ideals, his principles, his integrity for someone the likes of Donald Trump. According to Woodward’s book the president told Mattis to assassinate President Bashar al-Assad of Syria for using chemical weapons on his own people. Mattis told the president, “Sure, we’ll get right on it (or words to that effect)” and then told his own deputies they wouldn’t do any of it.

Mattis is the guy who told the president torturing enemy combatants was a very bad idea so Trump stopped advocating it. But today finds himself out of the president’s loop of favorite people. As of this writing the Secretary of Defense is with his base: the troops in Afghanistan. It’s no secret the troops from all the military branches revere Mad Dog Mattis, the toughest sumbitch to wear the uniform since Chesty.

If Mattis decided to run for president — for any party or as an independent — he would win, because of his reputation as a military leader and his understanding of government and (this is most important) he hasn’t compromised his integrity to placate the whims and insanity of the president.

Which brings up yet another bit from the Anonymous op-ed: “Given the instability many witnessed, there were early whispers within the cabinet of invoking the 25th Amendment, which would start a complex process for removing the president. But no one wanted to precipitate a constitutional crisis. So we will do what we can to steer the administration in the right direction until — one way or another — it’s over.”

President Trump is unfit for the office and many in his cabinet knew it from the very beginning. Why they have let it go on this long is baffling. It is unconscionable.

But getting back to Mattis, he isn’t Anonymous because he’s the kind of guy who would put his name to such an op-ed and take the sharp fire that would follow.

Someone floated the ldea that Anonymous is Kellyanne Conway. The same Trump advisor who told Meet the Press host Chuck Todd former press secretary Sean Spicer didn’t share falsehoods about the president’s inaugural crowd size, he was given “alternative facts.” As Todd told her, alternative facts are not facts, they’re falsehoods.

It was Conway’s turn on MTP that told us exactly what would define this administration. It would be devoted to lying and stoking the president’s base with those lies.

It’s plausible Kellyanne Conway is Anonymous. She knows how to write well, her husband slams Trump on Twitter often and she is just selfish enough to proclaim she and her colleagues are saving America from Trump — she and the inside resistance, the unsung heroes …

If you want to truly be heroes, come out from behind the anonymous curtain and invoke the 25thAmendment. Maybe you fail, maybe you don’t. Admittedly it would be hard to get 2/3 of the House of Representatives to vote to remove Trump from office and the Senate Majority Leader Mitch McConnell wouldn’t let such a vote come to the floor until they got their latest Supreme Court nominee confirmed. So it’s a tough uphill slog.

As Colin Kaepernick did when he started the anthem protests in the NFL, they need to believe in something even if it means risking everything.

It’s only crazy until you do it. Except in Trump’s case; he’s just flat out insane and off the hook. 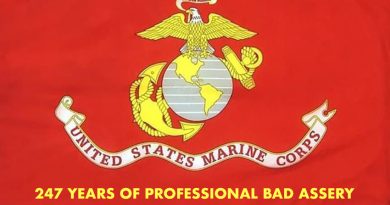 Celebrating the Blue Tsunami and 247 Years of Professional Bad Assery