William Friedkan, director of the classic horror film, The Exorcist, announced on Twitter that his friend and author of the book of the same name, William Peter Blatty, has died. He was 89.

Many will remember the hysteria the movie caused when it was released in 1973. People rans out of theaters screaming and crying, many others vomited in the theaters — indeed, the filmmakers had to cut many scenes the film’s producers thought were too scary for the public. In 2000 they released an updated version of the film, with the deleted scenes and yes, they were freakishly horrifying.

Blatty’s book was published in 1971. He did some research on the true story of a boy that had been declared possessed by the Catholic Church and sent to a St. Louis seminary for an exorcism. From that and research on other exorcisms Blatty wrote his fictional novel about the salvation of an innocent soul (played by 13-year old Linda Blair) by two Catholic priests (Max Von Sydow and Jason Miller) who sacrifice their lives to save the little girl.

Casual Catholics suddenly became more devout church-goers, frightened by the depiction of Lucifer as the ultimate evil warrior who will stop at nothing to steal souls from the Kingdom of God.

In the end the last priest to die is absolved of his sins with the squeeze of a hand. The Almighty God triumphs over evil, as it should in all religious-based literature and entertainment.

As one LAPX writer described the book, “I read it in one sitting, being too frightened to put it down and go to sleep. When they (his two older sisters) came bebopping through the door the next morning, there I was, still curled up in the fetal position reading the book. It wasn’t until I read the last word on the last page that I was able to fall asleep.”

It helped that Blatty was a Roman Catholic himself, having attended Jesuit schools, including Georgetown University. After getting his masters degree in English Literature Blatty joined the U.S. Air Force and became a psychological warfare officer. He is semi-famous for saying, “[A] 500-pound sack of propaganda leaflets, if dropped from an altitude of 13,000 feet and provided it scored a direct hit, would drive one North Korean soldier approximately four feet into the ground.”

He left the Air Force and started working for the U.S. Information Agency in Beirut, Lebanon (his parents were Lebanese immigrants). After three years he returned to the United States and began his writing career, beginning with screenplays. He wrote several for director Blake Edwards, including A Shot in the Dark. Eventually Blatty went into seclusion in thew wilds around Lake Tahoe to write The Exorcist. By 1974 he was the most celebrated author and screenwriter of the day. Coincidentally, the two other films making a big splash at the time were The Godfather, by Francis Ford Coppola, from the book by Mario Puzo and Deep Throat, the XXX-rated film that brought porn into the mainstream.

Blatty wrote a sequel to The Exorcist, Legion, a name taken from the books of Luke and Mark in the Bible. It became the 1990 movie Exorcist III (Blatty had nothing to do with Exorcist II) which Blatty directed.

He wrote a total of 12 novels, several of which became films, along with several non-fiction books, including his autobiography, I’ll Tell Them I Remember You. In 2011 Blatty released an updated version of The Exorcist, which he called the “second draft,” with has polished dialogue and new, spookier scenes. He said, “With forty years to think about it, a few little changes were inevitable — plus one new character in a totally new very spooky scene. This is the version I would like to be remembered for.”

William Peter Blatty, author and film director, died in New York City on January 12, 2017 — one day short of Friday the 13th. No cause of death has been determined.

Halloween is for Saints and sinners … mostly sinners 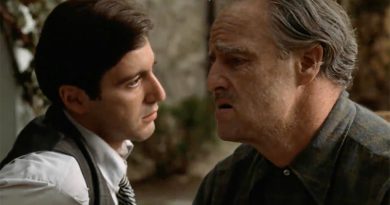