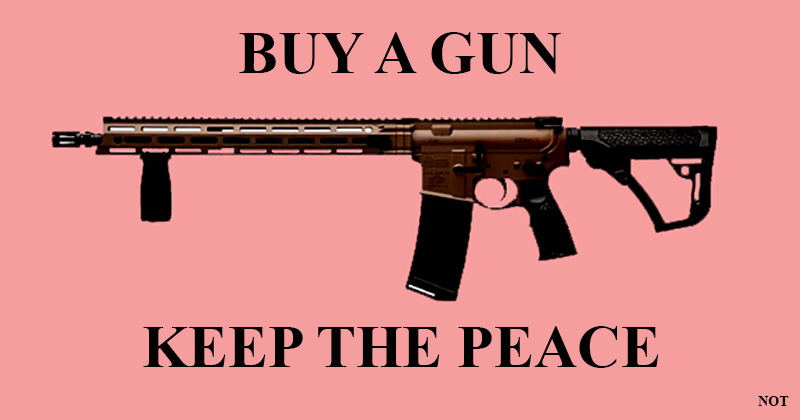 “Only creatures who are on their way
Ever poison their own well
But we still have time to hate
And there’s still something we can sell.”

In 2003, Lindsey Buckingham sang these lyrics on what was the most recent Fleetwood Mac album. Who would have guessed that they still make perfect sense 19 years later? We have learned quite a bit over the first two decades of this century. Unfortunately, our rate of progress has resulted in being run over by more enlightened nations. You see, knowledge is pointless if it is never put to use, and Americans seem hell bent on proving this point when it comes to gun violence.

In the week prior to Thanksgiving, we have seen three college football players murdered by a former player, five patrons at a gay nightclub gunned down in Colorado, and employees at a Wal Mart gunned down by a co-worker during their break time. In the time it took me to write the previous sentence, four students were shot outside Overbrook High School in Philadelphia. I am sorry, but if your plan was to grab headlines by killing your wife and kids before turning the gun on yourself, you are going to have to step up your game if you want notoriety.

There are places in this nation where leaders breathed a sigh of relief when they found out four college students from Idaho who were murdered were stabbed to death and not gunned down.

All too often, we find out after the fact these killers left behind plenty of tell-tale signs of the carnage they were about to inflict. Unfortunately, we are so self-absorbed we fail to recognize these signs or worse, just can’t be bothered. Talking about gun violence has done no more good than not talking about it. Now, no one talks about it; they just try to yell over those with a different perspective.

Hate is great because it sells. It sells more guns. What sort of sick culture sees a rise in gun sales every time there is another mass shooting? Of course, with the sale of guns, we need the purchase of more ammunition, otherwise guns are useless. And what good is ammunition if it can’t pierce the new and improved forms of body armor available to mass shooters?

Six months before Columbine, I wrote this verse:  “Hey Johnny, did you see the news?  I’ve got an idea we can use. Let’s steal some guns and your grandma’s car, we’ll lie in wait and then shoot up the yard.”

It was in response to a shooting in Georgia that resulted in some kids from a school I taught at trying to steal guns, along with a car, to shoot up an elementary school yard as part of a copycat shooting . Their plan failed when a 13-year-old driving the car drove it into a ditch, forcing them to sell the guns to buy bus tickets to get out of town in the middle of the night.

Conservative Supreme Court justices strike down one gun law after another and in the process have drilled into society that guns are sacred. They are wrong. They are simply political. Even the Second Amendment is subject to changes if done so in the right manner. However, as one person once wrote to me: “The reason why it is the Second Amendment is because our founding fathers thought it was the most important right we have.” He probably had no clue what the First Amendment is or any other one for that matter.

All the data in the world can’t fix stupid so save your voice and don’t waste your time getting into it with a zealous gun owner. If it involves any form of gun regulation, ammunition restrictions, or just plain common sense, gun nuts have no interest in giving an inch. What they claim to have interest in is defending this nation from when our government turns on its citizens. The funny thing is, they think this will be done under the leadership of Joe Biden and his army of tree huggers. Worse, they refuse to admit the only president who turned on its citizens was their guy on January 6th of 2020, the one who wanted to get rid of our Constitution.

Editor’s Note: We can learn a lot from The Daily Show’s Jordan Klepper.

There is nothing wrong with owning a gun. There is, however, something wrong with someone who feels the need to own a stockpile, especially when they consist of automatic and semiautomatic weapons meant for war. But don’t tell this to your neighbor who proudly owns a dozen guns and says he can’t afford Christmas presents for his kids this year because he blew his last paycheck on some weapon known simply by a few letters and numbers. Something they will complain about is your support of any measure to pass annual gun registration fees much like we have in place for automobiles. They won’t even see their hypocrisy when they tell you maybe we need to ban cars because they kill people.

When I was in elementary school, we used to laugh during drills for atomic bomb attacks. We’d struggle to fit under our desks. Some wise ass would let out a loud fart just as we finally showed signs of settling down and then we would return to our lesson as if nothing happened. You can damn well bet no one is laughing over active shooter drills in schools today.

What is laughable is the suggestion by pro-gun folks to arm teachers with guns so they can confront an active shooter. Florida Governor and potential Republican presidential candidate Ron DeSantis wants to fast forward military vets into becoming teachers to fight our teacher shortage and while we are at it, to confront active shooters. He makes the assumption that if you have spent time in the military, you are perfectly suited to meet the needs of kids of all learning abilities. Odds are, you are more apt to become the next mass shooter of children while this nation fails to adequately address your mental state while you deal with PTSD.

Now for the absolute crazy part. The people who yell, shout, swear, and threaten the most over guns being restricted due to gun deaths have the gall to claim they are the “Pro-life” party. Just as they see the death penalty as a deterrent to murder, they see more guns in more hands as the way to curb gun violence. They believe we are more likely to be shot and killed if no one has a gun than if we all are packing heat.

There are about 100,000 public schools in the nation. Toss in private schools, community and four-year colleges, and trade schools and you end up with close to 150,000 schools to protect. If you average ten people per school to protect against mass shooters, you need an army of 1.5 million people, each one who tests out as not being a potential shooting threat while having the training and courage to take on an active shooter or shooters. Currently, we employ 1.38 million people in our military. There is no money available to employ another army to protect us from ourselves. You know what does not cost money? Not owning guns.

Now factor in the cost and manpower needed to protect more than our students; shopping malls, performing arts venues, and tourist attractions to name just a few. We lacked sufficient manpower in the aftermath of 9/11 to protect our airports and by the time we did, we all bitched about what a hassle it is to fly. Imagine our lives with those restrictions placed on us just to go grocery shopping.

Today, we do nothing to curb gun violence. Worse, we claim there is nothing we can do about it even though nations all over the world experience little to none in a year of what we see in any given week. We have long since stopped dropping the ball. Instead, our leaders have refused to play the game of leadership, you know, the sort of thing that requires those in charge to have to make tough decisions that might not sit well with others because it is for the greater good of all.

So, it falls on each one of us to protect our own. For some, this means they are considering something they have never before considered: owning a gun. However, what good is it if you can’t follow your kid all day every day? We can’t even vote out leaders who are pro-gun when voting districts have been gerrymandered.

We can’t just up and move to a European nation or Asian country where gun violence is nearly nonexistent. There doesn’t seem to be any sure-fire solution that allows our citizens to own as many guns as there are people while ensuring our safety. However, perhaps if there were no more guns in the hands of private citizens, we might be able to find the time and energy to kill each other with love, kindness, and respect (I know gun owners are laughing at this). Then, and only then, will we be able to call ourselves peacekeepers.