On a recent visit to the Book Market in Oakland, my treasured stop in Mountain Maryland, I was immediately tempted by Bruce Springsteen’s autobiography, Born to Run.

As a former steelworker from Bethlehem Steel’s Sparrows Point, Md., plant, I was one of a multitude of industrial workers who respected the Boss. His voice and advocacy were truly formidable during the global crisis of the steel industry in the 1980s. His influence went beyond blue-collar anthems like “My Hometown” and generous contributions to food banks for unemployed workers.

Bruce rounded up other artists who recognized the need to nurture the creativity born in the catharsis of men and women losing good industrial jobs. He financed the production of a play, Lady Beth, written in part and acted by workers who lost their jobs in the shutdown of a Bethlehem Steel plant in Vernon, California. The play toured 16 cities, including a performance for members of Congress in support of legislative action to assist workers facing economic devastation. He valued worker writers like me.

So it was something of a magical moment at the Book Market when I opened “Born to Run” to the exact page where Springsteen talks about his visit to Pittsburgh and his support for steelworkers down on their luck. I wasn’t planning to buy the book right away. Maybe I was worried about being disappointed, as I was when “Human Touch” didn’t help match my reverence for The River, Nebraska or Born in the U.S.A.

But magic was calling. I bought the book. And soon I was savoring the lyricism and descriptive power of the deified rocker, the New Jersey surfer whose mother always wanted him to become a writer. Reading “Born to Run” was every bit as satisfying as coming home from work after a cold day in the mill back in the 1980s to a bowl of beef barley soup, a bottle of porter and the warming wails of The River.

Bruce’s imagery is stunning. His portrayals of life on the Jersey shore are novel-like. But he writes, just as eloquently, of places so much different. Of his first visit to California, he recalls an evening “with the sun burning red into your eyes, dropping gold into the western mountains.” His portraits of friends are painted with care and whimsy: “Tom Potter was a fifty-year-old salt-and-pepper-haired, big-gutted, pirate belt-wearing, sexually preoccupied, goateed boho who opened and ran the strangest music club I’d ever seen.”

Springsteen could easily have framed his story, written over seven years, in a superficial, “tell-all” package. It would have sold millions. But that’s not Springsteen.

“Writing about yourself is a funny business,” Springsteen says. “But in a project like this, the writer has made one promise, to show the reader his mind. In these pages, I’ve tried to do this.” And how he did.

Bruce has often told the story of a rough relationship with his father in song and soliloquy. “Born to Run” takes their relationship into stark, revelatory territory, laying bare his lifetime struggle against sometime acute depression and mania, including decades of therapy.

There is never a minute of wallowing. Springsteen’s conflicts, internal and external are everywhere tempered by a seemingly boundless empathy.

He reveals the struggle between his desire to be an individual artist like Dylan, who he calls the “father of my country…put[ting] his boot on the stultifying politeness and daily routine that covered corruption and decay” and his need to surround himself with a band of lesser stars to illuminate his galaxy.

Steven Van Zandt and Danny Federici, his boyhood friends, are like the motorcycling posse of the Southern son he credits with birthing and whetting his appetite for rock. But Springsteen didn’t buy them all new bikes like Elvis did for his boys. He put them on stage and made them earn their money. He openly frets about his failings in balancing his roles as simultaneous paternalistic padrone, friend, father confessor and tough-love disciplinarian.

I was reminded reading “Born to Run” of my visit to Elvis’s birthplace in Tupelo, Mississippi. The King’s father, like Bruce’s, jumped from job to job. They had their deprivations. Springsteen writes about living in a cold-water apartment where he and his sisters only bathed a few times a week to save his mom the trouble of boiling water downstairs to bring up to the bathtub. They survived under their mothers’ shelter. Both were immersed in the music and ethos of their Catholic and Pentecostal churches. And they became tribunes for separate branches and geography of the white working-class in their era.

But Springsteen came of age in a time of political and racial rebellion. His high school friendships bridged class and racial divisions. Some of his early bands were half African-American. His songs referenced racial conflict. He joined Little Steven’s Sun City, protesting South African apartheid. And he has always sought inspiration from different genres of American music. On a 1992 touring bus trip with a new multiracial band, he encouraged everyone to pass around a boom box and play his/her favorite music, always ready to pick up new tastes and inspirations.

In “Born to Run,” Springsteen puts readers on our own tour bus, visiting haunts where, as a working-class rebel he drove without a driver’s license and picked up scant dollars with his guitar, never working a regular job and priding himself on not being abused by “The Man.” With maturity and experience, and exposure to returning Vietnam veterans like Ron Kovic, the subject of the film Born on the Fourth of July, Springsteen opted to become a more conscious political actor.

He read Joe Klein’s biography of radical folk singer Woody Guthrie and Howard Zinn’s People’s History of the United States. His exploration provided a better grounding for his songs in America’s story. But he posits no pretense as another Woody or early Dylan, writing that he still has too much affection for pink Cadillacs.

For Springsteen, politics is still personal. He says his older sister Virginia’s three-word review of The River is still the best he’s ever had: “That’s my life.”

“Born to Run” reveals a man who works as hard to understand himself as he does to make music that moves the soul. That’s saying something for a guy who once exhausted his entire savings in the studio trying to perfect his sound, a guy who wrings out that black shirt several times during his three-hour concerts. Springsteen’s narrative is one of bone-dry honesty, never the self-serving slop of “brand building.”

In Born to Run, Springsteen explores his chauvinism and “narcissistic tendencies” and bares the guilt for those he hurt. And he relates his battle to accurately understand and portray the lives of those who live on the edge of survival even as he inhabits a place of wealth and power. He spares harsh criticisms, even of those with who he had epic conflicts, always looking for the better angels in friends and foes. He works to conquer arrogance.

“As my success increased,” he says, “there was something about that ‘rich man in a poor man’s shirt’ that left an uneasy taste in my mouth … The ambiguities, the contradictions, the complexities of your choices are always with you in your writing as they are in your life. You learn to live with them. You trust your need to have dialogue about what you deem important.”

Springsteen’s carefully constructed words of praise for those with whom he carries on that dialogue: his wife, Patti, his children, his bandmates, his mentors inside and outside of music and his musical heroes are packed with humility and grace.

After producing his greatest-hits CD, Springsteen writes, he revisited his “decades-long inner debate” over the question, “Where does a rich man belong?” The answer came with his next album, The Ghost of Tom Joad. He had often visited the small towns of California’s Central Valley, where he “could feel the America of the next century taking shape.” Songs about Mexican brothers living and dying by their wits in “Sinaloa Cowboys,” Vietnamese shrimpers in “Galveston Bay” and blue-collar workers in “Youngstown” were all attempts to “get the music and lyrics right, [so] your voice disappears into the voices you’ve chosen to write about.”

Springsteen knows the world. And the world knows him. That makes his “wake me up now” stories of meeting Frank Sinatra, Mick Jagger and Paul McCartney for the first time all the more evocative. His worldliness also makes his confessions of naiveté no less compelling.

He was surprised that President Ronald Reagan and the right tried to co-opt his message in “Born in the U.S.A.” He was equally blindsided by the booing of some fans and the icy criticism of police departments after he sang “American Skin” the police shooting of Amadou Diallo in New York City with its haunting “41 shots.” He bravely defied a warning by the police chief in NYC not to play the song there.

“Born to Run” leaves me waiting impatiently for Springsteen’s interpretation of America’s current predicament. I’m praying the Boss will rise triumphantly from the despair he must be feeling and give us a song for the times. I feel like the guy who yelled out to Springsteen on a New Jersey bridge as the World Trade Center still smoldered: “Bruce, We need you.” Springsteen says that stranger’s call was his motivation for “The Rising.”

“Born to Run” was meticulously structured, just like his concerts, to reach a broad cross-section of his fan base. But we all bring our own narratives to his story. And “Born to Run” jogged my memory of a story Bruce left out of his autobiography.

In Freehold, N.J., Springsteen’s hometown, 3M Corporation had announced plans to shut down their plant that produced recording tape. Many of the workers at 3M had formerly worked at the Karagheusian Rug Mill, a plant that once employed his father. Rather than settling a labor dispute, that shop closed up and went south for cheaper nonunion labor.

Union leaders at 3M asked Bruce to assist their campaign to convince the company to keep operations in Freehold. Springsteen enlisted Willy Nelson, John Mellencamp, Joan Jett and the Blasters to help. He sponsored a concert to raise money to fight the shutdown. Then he and Nelson took out full-page ads in the New York Times, headlined with lyrics from “My Hometown.” Their exposure cast a spotlight on a proposed “bill of rights for workers facing plant shutdowns” that would provide help for higher education, full medical protection, income security and child care assistance to families facing job loss.

The 3M struggle was unsuccessful. The plant closed in 1986. A shutdown bill of rights—a measure that would have done so much to address the futures of discouraged and abandoned workers was never passed, contributing to dire political consequences three decades later. But Bruce Springsteen had tried. His biographer, Dave Marsh, writing in “Bruce Springsteen: Two Hearts, the Story,” says, for Bruce, the 3M struggle “was a matter of equality rather than charity.” Springsteen, he says, needed those who were fighting the shutdown as much as they needed him.

“Born to Run” completes the circle of that mutual indispensability.

In 1973 Len Shindel began working at Bethlehem Steel’s Sparrows Point Plant in Baltimore, where he was a union activist and elected representative in local unions of the United Steelworkers, frequently publishing newsletters about issues confronting his co-workers. His nonfiction and poetry have been published in the “Other Voices” section of the Baltimore Evening Sun, The Pearl, The Mill Hunk Herald, Pig Iron and other publications. After leaving Sparrows Point 11 years ago, Shindel, a White Marsh resident and grandfather of seven, began working as a communication specialist for an international union based in Washington, D.C. He enjoys frequent weekends in Garrett County, cross-country skiing, kayaking, hiking and fly-fishing. 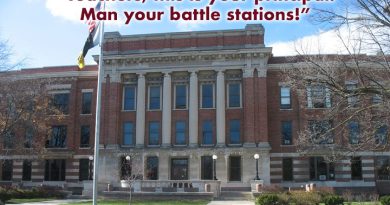