CATS is the fourth longest running show in Broadway history and now it has returned to Los Angeles and the magnificent Hollywood Pantages Theatre. Based on a book by T.S. Elliot the musical was composed by Andrew Lloyd Webber.

The story centers on a tribe of cats known as the Jellicles. The Jellicles cats have gathered as they do each year to make the “Jellicle Choice,” a process which results in one of the cats ascending to Heaviside Layer and then returning to enjoy a new life.

Throughout the show the singing and dancing never ends and is nothing short of spectacular. But to attempt to fully explain each twist and turn in this extraordinary play would be like trying to explain the meaning of life in 25 words or less.

The first cat Munkustrap introduces Jennyanydots. She is a large tabby cat who is almost motionless during the day but at night becomes hyperactive as she attempts to teach mice and cockroaches ways to curb their natural destructive tendencies.

This is all explained in her song. When it ends the music changes as Rum Tum Tugger makes his wildly extravagant entrance as his fickle nature is explained in song.

So it goes as character after character is introduced and defined in song. Act one marks the end of the Jellicle Ball as Grisabella sings “Memory” as a guilty Deuteronomy looks on.

Act Two introduces Asparagus or simply “Gus,” a once famous actor but now an old cat suffering from palsy. Then with abundant song and dance an entire steam train engine is assembled from parts laying about the junkyard. 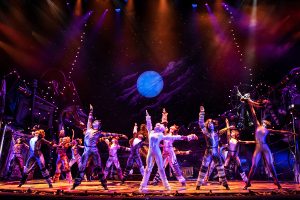 Eventually Grizabella is chosen as the cat to ascend to the Heaviside Layer to be reborn to a new Jellicle life. The show ends as Old Deuteronomy gives his closing speech. Thunderous applause and standing ovations.

CATSis without question one of the most unique musicals in the theatrical world and It is also one of the most entertaining shows ever created. Now you can enjoy CATS at the Hollywood Pantages Theatre, 6233 Hollywood Boulevard. Los Angeles, California 90028 now through March 24.For showtimes, details and to purchase tickets just click here.

If you were not present at the spectacular opening night festivities you can get a glimpse of it all right here right now with just one click here.

And for one of the most fascinating books ever written about one man’s experience in the Vietnam war get this powerful and fun book.

‘Charlie and the Chocolate Factory’ is a sweet new musical

Motown is back in our town