Tonight Game 4 of the NHL Western Conference Final of the Stanley Cup Playoffs gets started at the Bridgestone Arena in Nashville, TN. It’s the Anaheim ducks vs. the Nashville Predators, two teams with differing styles and strengths.

The Ducks find themselves down in this series, 2-1, having lost their first game on their home ice at the Honda Center. They won Game 2 and the series moved to Nashville where the Predators took a very close Game 3 by a score of 2-1.

Nashville goalie Pekka Rinne is having the best year of his career and he’s been near perfect during the playoffs. His save percentage is .951. In the other net John Gibson has struggled at times to follow the puck, which has led to some easy — or easier — goals for the Ducks’ opponents, including the Predators. His percentage when short-handed has been a dismal 69 percent.

Nashville’s defensive line has been much more active than Anaheim’s, with their D-men joining odd-man rushes into the Ducks’ zone.

The Ducks though have had a knack for responding to teams that, at least in the stat sheets, looked a little better. It should be no surprise the Predators were kept scoreless in the first two periods of Game 3.

But it’s also no surprise the winning goal came on a power play, when the Ducks are usually at their most vulnerable. Anaheim’s penalty kill has been near the bottom of the 16 teams in the playoffs.

For the Ducks to pull out a win on the road and tie up the series they will have to get more from Ryan Kesler and Corey Perry. Kesler has gained a reputation for his tight checking of key opponents, but he has only one point in this series, eight overall in the playoffs. Perry has not been at the top of his game all season. He scored the power play goal in Game 3 and has 10 points in this postseason, but just the one point in this series. And they will need Ryan Getzlaf, their standout captain and center, to continue his dominating play. He has 15 points in these playoffs so far.

For the Predators, they need to get more production out of P.K. Subban. He has one point in this series and eight in the playoffs. Mike Fisher has been nearly invisible in the playoffs. He has no points in the postseason.

Tonight, like every game in the playoffs, is big, even more so considering how evenly matched these two teams appear. The Ducks would like to go home to the Honda Center with an even slate. They Predators would like to be one win away from going to the Stanley Cup Final.

Below are Claudia Gestro’s video reports from Games 1 and 2 at the Honda Center.

UPDATE: The Anaheim Ducks pulled out the win in overtime, after giving up a two-goal lead in the final minutes of the third period. It the final minutes the Ducks gave the Predators power play opportunities, including a 5 on 3 advantage for over a minute with foolish penalties.

Nate Thompson scored the winning goal with an assist from Corey Perry, 10:25 into the OT. There is some question though as most viewers credit Perry with the goal. The Ducks will take the win either way.

Game 5 is Saturday at the Honda Center in Anaheim.

Kings take loss on Thursday and prepare for Canucks 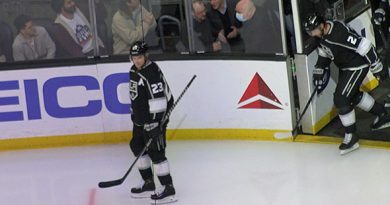 Kings in Playoffs and Dustin Brown Announces His Retirement