The year is 1863. The month is May. The Civil War is raging like a firestorm. By the time this lethal national tragedy is over, it will count over 620,000 casualties, a staggering total for its time. Although troops of the Army of the Republic (Union) under General Ulysses S. Grant, have Vicksburg, Mississippi under siege, the Confederacy, the (South) under General Robert E. Lee, is far from defeated.

The critical battle of Gettysburg, in Pennsylvania, has yet to be fought. That epic encounter won’t begin until July 1st of 1863. Meanwhile, since 1862, Union troops, thanks to their maritime prowess, are occupying the Sea Islands off of South Carolina’s coast.

First Dark is an ambitious historical novel by Bob Rogers. It’s full of dramatic scenes. It opens in the low country of South Carolina on a slave planation, not far from the bustling port city of Charleston. From there, it takes our protagonist, Isaac Rice, then a 16-year-old-black slave, on an adventurous odyssey. It leads him to the heartlands of Mississippi, to the raging Indian Wars on the Great Plains, and then to the deserts of Texas, New Mexico and Mexico. The omniscient narrator focuses primarily on Isaac, but occasionally will move to other characters.

Back Story: South Carolina, of all the “13 Slave States,” was probably the worse! It shamelessly advocated for the horrific Civil War and for the racist doctrine of “White Supremacy.” It was also looking, along with its fellow state co-conspirators, to create a “Slave Empire,” modeled on the British Empire.  It, they hoped, would eventually include the 13 breakaway States, plus a conquered Mexico and Cuba.

Right up to the battle of Gettysburg, the scheming British colonialists, no surprise, were biting at the bit waiting to openly recognize the Confederacy. Were they the off-stage Wirepullers behind the bloody Civil War?

Many of South Carolina’s most insufferable plantation owners were descended from the grasping Tories, who had sided with the British colonialist against our patriotic Founding Fathers in our Revolutionary War. The Civil War (1861-65) was their vile way of getting even. The then-demented gentry of that South Carolina bragged about hating the so-called, “rabble of the North.” 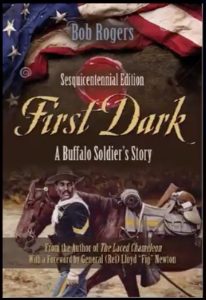 Getting back to Isaac. His yearning for freedom sets the motif for this novel. He doesn’t know it at the time, but his young life is ready to take on some radical twists and turns. It will carry him far from a Civil War setting on the East Coast of our badly-divided nation. Hopefully, it will lead him to one day have his own rice farm. Will that dream ever come true?

It helps in the writing of this novel that its author, Rogers, has had a distinguished military career. Many of the locations he chooses in the book are battlefield-related sites. Rogers, an ex-US Army captain, paratrooper and combat veteran of the Vietnam War, has a keen eye for place, people, logistics and detail.

Rogers also offers cultural and political contexts in the shifting scenes, along with some strong descriptive writing. His first novel, Will and Dena, was a historical novel about WWII.

The dialogue of Rogers’ First Dark rings with authenticity. Most of the character are creatures of fiction, a few are historical figures. To enhance authenticity, the damnable “N” word is repeatedly used by the author in dialogues by the slave owners and their hired thugs. They use it to dehumanize their subjugated black victims. Rogers’ story works at the edges of a wide sweeping historical background, while the focus, appropriately enough, remains firmly on Isaac’s coming of age.

One day, Isaac, while helping his father Mark take a wagon load of “rice, corn and fodder,” to the Rebel troops in Charleston, is suddenly ambushed. This incident happens not far from the Tiffany Planation, where his family resides in squalid conditions. Isaac’s father is shot and killed, along with two of the Confederate soldiers protecting the convoy of eight wagons. Isaac survives because one of the attackers pushes his head down while the bullets are whizzing by him. He is shocked to learn that the attacking soldiers, wearing blue and red uniforms, are Union troops, “Yankees!” They are also black and speak the “Gullac” dialect of the area.

Like Saint Paul falling off his horse on the way to Damascus, Isaac has an awakening as a result of the ambush. After returning to the planation, he slowly begins to see the Black Union troops (soon to be known to history as the “Buffalo Soldiers”) as his path out of captivity.

Linking up with the Buffalo Soldiers is his immediate problem. Isaac is black, a slave, barely literate and trapped deep in the heart of the South. It’s a violent place where a white man deliberately killing a black person for any or no reason at all simply doesn’t register as a crime. It’s the Deep South, in 1863, and it reeks of barbarism.

One scene that stands out for me, among many, is the author’s description of a runaway slave being beaten to death with a “cat o’nine tails” by the son of the plantation’s overseer — a thug named “Jeb.” The local community was forced to watch the terror-filled event as each hard blow with a three foot long weapon to the back of the slave drew “blood.” Jeb bellowed, “Ni y’all watch what happens to n***** who run off.” When Bianca, Issac’s twenty-three- year-old friend, and soon-to-be lover, yelled out for him to stop. Jeb quickly turns on her and violently strikes her with his cat o’ nine tails, screaming at her, “Shut up, you black bitch!”

Not all of Rogers’ descriptive passages work. His love scenes come off as awkward and choppy. They’re too distant from the passions he’s trying to convey. Overall, too, some tighter editing would have helped to make the book flow more smoothly. Nevertheless, Rogers’ story-telling is captivating. And, I wouldn’t be surprised if First Dark ends up as a popular movie.

Finally, the radical changes that Isaac goes through in this epic tale are the heart of the book. As his character evolves from his war-time experiences, along with the personal losses he suffers, and the caring relationships that he embraces, we see him becoming a man on a mission that is enriching his soul. Isaac’s journey, with a nod to the splendid mythologist Joseph Campbell, is a hero’s journey. It’s also a darn good read.

Self incrimination: May I ask me some questions?