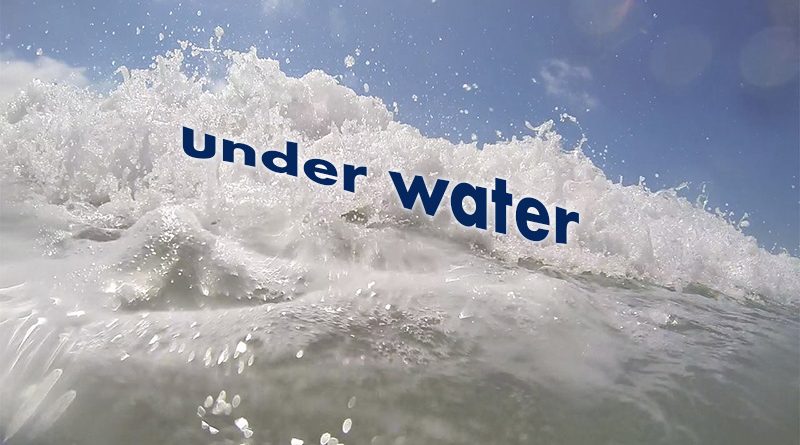 Under water, off the coast of Southern California (Tim Forkes)

We are fooling ourselves if we think we can win the battle against global warming. Let me be the one to break it to you, we have already lost. It is just a matter of time before Mother Nature wipes us all out and except for very few privileged folks, we will be left here to die off as a species. I say a select few because what do we really think space exploration is about? If establishing “livable” colonies in space sounds like your way of living it up, then go ahead. As for me, you can kiss my asteroid.

If life in space does not prove possible, perhaps we can all just live under the sea. I hear nothing is better than where it is wetter so maybe we can find a way to return to where we all crawled out from billions of years ago.

In 1960, the world population was three billion people. In November of this year, we are set to lay claim to our eight billionth human being. Considering the “experts” and crazy folks from the far left have been harping about global warming since about 1990, when our population was 5.3 billion, we have somehow managed to live in denial for thirty years.

Recently, President Biden signed off on an executive order to help us win the war on global warming. It promises to add more green jobs, decrease the cost of electricity for those of us in hot places, and provide more cooling centers for the public to sit around and check their phones to read the ten-day forecast. It’s basically toothless because most all executive orders are and because, not surprisingly, for about 30 years, we have had one do nothing congress after another while we have managed to add to our global woes.

Global warming is not Biden’s fault so if your remote is stuck on FOX News, get your butt out of your recliner, and physically change the channel like we did in 1970 when our world population totaled 3.7 billion people.

In case you have not picked up on my message, let me spell it out to you. We have too many people on this planet. This is our biggest global warming issue. People destroy this planet, and it is usually the result of greed. Yes, I am blaming the rich for this one and they do not care because they already have their seats reserved on the first space flight off this dump when the time comes. Until then, they will use the rest of us to line their fat wallets.

Perhaps if President Biden was our president in the 1970’s, he might have been able to sit down with leaders from both parties and begin hammering out a plan to save our planet. Unfortunately, today, to sit with someone from the other side of the aisle is a worse act than storming our capitol. Am I the only person who thinks the reason the GOP wants to ban abortions is so all those billionaires they are in cahoots with can be assured of a cheap labor force? How else will they continue recording record quarterly profits while wages remain stagnant and unlivable, kind of like the air we breathe?

Global warming is no longer entirely the fault of the United States. Let’s face it, the rest of the world has given us a big fat middle finger and told us who are we to urge more global friendly practices when it was us who built a great nation by tearing up the earth? And just like we learned, nations in South America, Africa, and Asia have learned all the concrete jungles we build to house the hundreds of millions of people we produce will never replace the harm we do to all the actual jungles we tear down in the process. Seriously, who really thinks buildings with plants on them are going to replace the oxygen we lose from cutting down the rainforest?

Today, we sit about 50 years behind the eight ball when it comes to solar energy. We’re finally seeing it makes more sense to build homes and shopping centers with solar roofs now that we figured out how the energy they produce sends money to government funded utility companies.

Wow, windmills in the ocean to produce more energy for more utility companies makes more sense than home units that do the same for individual homeowners. “Why let homeowners produce their own free energy when we can screw things up and make them pay for it,” has been our approach. Besides, if people are allowed to produce their own free energy, they may not need to work so much to pay their bills.

Part of Biden’s plan includes warning systems for when it is not safe to be outside because of the heat index, foul air, or oncoming tsunami/hurricane/tornado/or plague of locusts.

We are doomed. If we all went crazy and are now on medication for all our mental illnesses thanks to being locked up because of COVID, just wait until a government-controlled home locking system is in place making us all remain indoors until mother nature lets up on her assault. Somehow, I think if that happens, we will still find a way to add to the world’s population and no one will care anymore if you are inbred.

It takes brave and inspiring leadership to keep a nation fighting a war where they are getting their butts kicked. Just think if Winston Churchill had been Jimmy Carter. The British would have caved to all that Nazi bombing they endured. I am sorry to report, there is no amount of bold leadership that will help us defeat an opponent who is invisible, strikes at will, and lulls us into thinking all is well and we do not need to change our ways. The truth is, we needed to begin changing our ways half a century ago. The same is true for all the other industrialized nations of the world. Some have, but unfortunately, as intelligent as they are for the changes they have made, they are small nations and Americans just do not listen to them.

In fact, some Americans do not listen to anyone because there is nothing in the Bible about global warming. Apparently, there is plenty about ostracizing women, gays, people of color, and people of other religions. They have their hands full trying to save the world from these dangers to turn their attention to global warming.

Besides, this is all God’s wrath for wanting to snuggle with someone other than a heterosexual and even then, not until you are married or a congressional intern. God will save the chosen and apparently the list is being trimmed down every week now that God saw fit to stack the U.S. Supreme Court.

And let’s not forget our military. How can they be expected to fight global warming with their current batch of weaponry? They are going to need new fighters and bombers along with ways of delivering smarter nuclear weapons to detonate in the eyes of hurricanes so we can all get back to our jobs. Before this can be done, they must be tested on other nations in the name of freedom all the while ridding the planet of few more pests. Besides, if people won’t stop having sex and procreating, we will need a military who can go door to door and systematically kill the old, the poor, and the nonbelievers while extracting little kids to be raised to work for food and housing.

You see, the worse this mess gets, the less desirable it becomes to live on this planet. While it is nice to go into third world countries and provide them with drinkable water and some electricity, let’s start adding a little something to that water that sterilizes them. Otherwise, when we run out of pasture and farmland, we may have to resort to eating them and that should only be a last-ditch effort for when we have run out of juicy overweight Americans to chow down on.

There will come a point in time when the number of people on this planet just can’t be sustained with a livable life and when that happens, there will be refrigerated bins filled with dead people sitting offshore waiting for delivery to our grocery stores because we long since ran out of beef, poultry, fish, and pork.

Perhaps all of this sounds like some sick futuristic world depicted in a film. However, there are people alive today who never imagined our planet in its current condition 50 years ago. I am one of those. I got to enjoy a carefree life where you could roam and explore your immediate world without worrying about what was happening to our planet. We put on our play clothes and went about having fun under the sun.

We have since moved on to sunscreen which has been replaced by UV retardant clothing. Kids need to use their inhalers before they take part in some indoor interactive fitness game. Forget about going outside and playing a game of kick the can with the others in the neighborhood. You now get to play some war game with a kid halfway around the world whose city is on mandatory lockdown.

My only bit of advice, besides stop breeding, is if you don’t buy into my message, just go to the beach, and stick your head in the sand. Tell me what it is like to breathe in sand laced with tar and human waste. Just stand six feet away from me and be sure to save the excess water from that shower you took. We might need to drink it later.

Mollie Hemingway takes on the generals