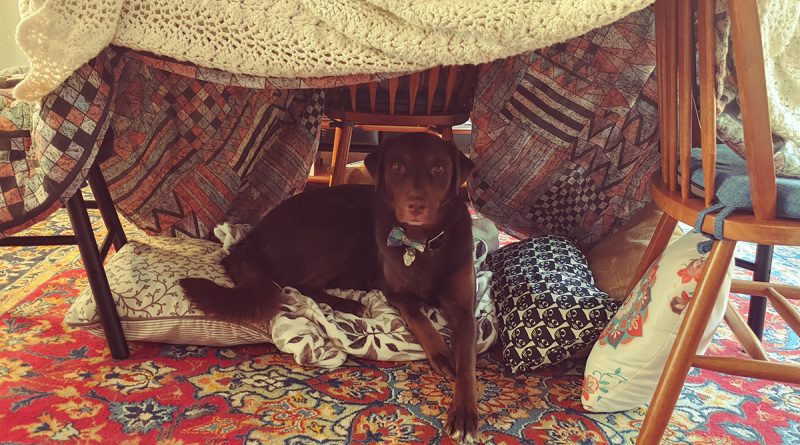 Frasier in his fort (Megan Wallin-Kerth)

“His name is Frasier? Like the TV show?” the vet asks.

“Yes, exactly!” I reply. “We joke that he’s our ‘therapy dog.’ But he’s about as silly as the Kelsey Grammar character, just furrier and less self-important.”

She gives a forced smile, one that says she saw that joke coming a mile away and proceeds to ask me questions about my adorable Chocolate Labrador and Australian Shepherd mix.

Although I have two little ones at home whose needs far outweigh — and outrank — those of my dog, I couldn’t easily say that I don’t think of him as practically one of the kids. At the very least, he’s a bonified (no pun intended) family member.

Of course, many Americans own dogs, and childless couples often refer to their pups as “fur children.” And while that may seem, on the surface, to be a negative thing, it’s actually a sign that we aren’t doing so poorly as a nation as we are sometimes tempted to think.

To own pets whose value is purely rooted in companionship is a privilege. Anyone who raised animals for meat or labor knows that.

For us, the dog started as a way for me to adjust to losing the weighted responsibilities of motherhood when I lost a child. Although the loss was temporary (two years, due to custody issues) it felt far longer and was undoubtedly the most difficult few years of my life. COVID also reared its head during that time, allowing me to justify taking the risk of a new career.

I picked something selfish this time: writing. I was done fielding phone calls for those in mental health crisis, only to direct them to long waitlists and underfunded resources while I worried about their wellbeing every night after I went home.

While the shift away from working in community mental health was a positive one, all the adjustments falling in line so abruptly hit me like a swerving semi. I suddenly had little to no one to show up for other than myself — and at the time, all I could think was that I didn’t feel worthy of that kind of effort.

Then a coworker told me her family had a dog they were trying to rehome. He was lovely, she said, but too much work for an already overworked family. And he was smart, but not well trained.

At this point, I had been begging my boyfriend at the time (now husband) to consider getting a dog.

“I need something to do after work,” I would say.

He countered with all the logical points, many of which still hold true: It’s hard to travel, dogs are a lot of work, they’re expensive, it takes time to train one, etc.

I listened but kept looking at dogs listed online at the Oregon Humane Society. Looking through the senior dogs, the middle-aged pooches, the adorable puppies, I told myself I could take any of them home and find some purpose besides lingering in the free time to which I was so unaccustomed.

Then this fell into my lap: a coworker’s dog, untrained but young, with promises to include all his toys and pay for the first set of vaccinations.

To this day, I believe there are only two instances where someone can fall in love at first sight: (1) with their child, and (2) with their pet.

Adult humans are too complex, too manipulative, and too disastrously but beautifully burdened by our life experiences to truly meld together in a soulmate type of way — like some sort of supernaturally instantaneous sync. But with animals and babies? There is a type of magic that happens.

From the moment I looked into those deeply hazel, unusually human-looking eyes, I knew I had to bring this dog home. Only five months old, Frasier knew little except the life he had lived, and he howled in confusion and fear the whole way home.

However, once I got him inside the house, he warmed up quickly.

Growing up, my well-intentioned mother had allowed me to have several cats and dogs. However, when they got to be too much (financially or otherwise), she gave them away — often without my agreement or knowledge. I recall coming home one day to find Roxy, our white cat with black spots conspicuously on her head where we joked her “devil hours” had been torn off, had been dropped off at the shelter. As a child, I resented this, but voiced no complaints as I understood that because I didn’t pay the bills, I didn’t have a say in how long a pet stayed.

I tried to take care of the animals regularly, to play with them and involve myself in all aspects of pet ownership, and yet any that repeatedly puked on the rugs or tore up the furniture soon went missing.

It was too much. I detached and accepted animals as lesser life forms who couldn’t possibly miss their humans. I told myself my pets didn’t even know any better once they arrived at a new home, that they were all adopted out at the shelter immediately, and that they probably felt nothing for me in the first place. Hell, they probably only liked me because I fed them.

Then I grew up.

My first pets as an adult were hamsters. I could keep them easily, they were quiet, and (I thought) I wouldn’t feel anything when they died. But this time was different. Because I hadn’t prepared myself for the possibility of my pet suddenly disappearing, it was heartbreaking to watch the first one pass away.

I listened in terror to little squeaks of anguish as his heart presumably failed, knowing that he was old and likely experiencing a stroke or heart attack. I told myself I’d call the vet in the morning, but morning came too late. By the time the regular vet’s office opened, Robert the hamster was cold and stiff.

I shocked myself with how many tears I shed over a rodent — and swore that I wouldn’t ever get a dog. I mean, I couldn’t even handle the passing of a hamster without falling to pieces as my uncle compassionately dug a hole for me and allowed me to bury him with some semblance of dignity.

Thus, years later, only once I’d unexpectedly experienced motherhood, I decided that my heart had already been exposed to the most terrifying love of all —  that of a parent for a child — and I was probably ready for a dog.

But unlike my childhood experiences, it wasn’t so much dog ownership as it was dog companionship. I had conversations (one-sided, yes) and long walks with him, I allowed him on the furniture (something we both said we would never do), and I brought him with us on road trips. I swore he was different from “other dogs,” although every other dog has the same head tilt to familiar words or disgruntled groans when told to “leave it.”

When all was said and done, when tragedy had passed and I became the mother to not one but two children, Frasier was part of the family as well. He’s in our family photos, he gets brought up in conversations, he has his own doctor and set of emergency contacts, and when we have to leave him behind during a trip, we all feel a bit incomplete.

A month ago, he had a health scare, and for a moment I thought, “This is it. I’m losing him. I’m going to have to tell the family he just collapsed in the backyard and didn’t wake up.” Even once he had clearly recovered, the feeling lingered as that realization hit: One day, likely in the next decade or so, I’ll have to tell the girls our dog is dead. We’ll have to help them say goodbye.

It gutted me. Not because I haven’t experienced real loss before; On the contrary, I’ve experienced my fair share of family tragedies. But Frasier, with his unconditional enthusiasm and limitless love, had taught me how to care enough about myself and connect to the world around me in a way that made me a better parent, a better partner and ultimately a better person.

And there’s no way to repay him for that. (Maybe a few extra games of fetch.)

So while we may get a few forced chuckles out of the “therapy dog” joke, it’s a genuine sentiment. That dog has arguably helped me more than most human therapists ever could. 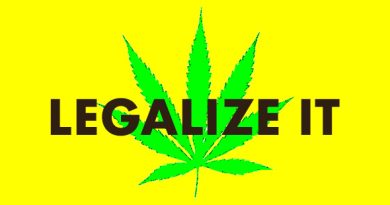 Potheads or Drunks: Which is worse?