Some months ago I wrote about our furry companions. After reading, my niece, who has dogs and always had dogs and cats, said we don’t deserve our furry companions because they give us unconditional love and support — yes support — we can never match. A person with a pet, a furry (or feathered) companion is much better for it.

We don’t realize it until it happens, but our furry companions support us in our times of need. When we’re feeling sad they want to comfort us. If we fall down they want to help us; when I went into a coughing fit Bella would come over to see if I was okay. How can we not love and appreciate that type of concern?

When we get excited about something our furry companions get excited with us. In fact, they can actually get in the way sometimes and we lovingly try to move them to one side, but what the heck, there’s too much tail-wagging to go along with the excitement so our furry friends lead the celebration.

There’s nothing better than having a dog to walk with around the neighborhood. Or around a lake or at the beach. Some dogs love running around in the wet sand as the waves come rolling in. Bella is a dog like that, but when we went around the lake she had no interest in even walking out on a pier, let alone into the lake. Go figure. But let her off the leash for a few minutes and she could tear up and down a mud-laden path and have no problem stepping all over my shoes and the floor of the car with those muddy paws. But that is okay because mud dries and can be swept away, But the happiness in her face, the pure excitement and unabashed joy in her demeanor, was worth every grain of dried mud in and on my shoes. Every grain of sand from the beach was worth it after seeing how she loves that wet sand and rolling waves. 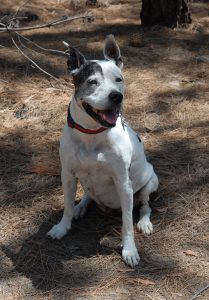 Looking at her as she watched me eat, was worth every minute of that, “Why aren’t you sharing that with me?” look. Once in a while I would prepare bowls of fruit for our breakfast (she loves blueberries and strawberries) and would reach down and give her a few blueberries or a piece of strawberry as she so patiently waited until her bowl was ready and placed on her mat.

One Sunday my buddy John and I took Bella to a local park for a couple hours and afterwards we stopped at McDonalds for a couple of breakfast sandwiches. We also got a double hamburger for Bella and after removing the bun she gobbled it up in just a few seconds. For the rest of the day she had the worst gas, worse than yours even, and John said (he owns the condo) no more McDonalds for Bella!

Okay, when the cat’s away, the mice will play and on several occasions little Bella and I would swing through a fast food drive-thru and she would have her double burger while I had my food. Sorry John, my furry companion trumps your nostrils.

She loved it when there was some cooked chicken, turkey or tuna in her dish with her regular food. And boy is she a sloppy eater and drinker. After cleaning her food bowl she would get into her water bowl and lap up a good portion of it. And a good portion of it got on the mat under her bowls. Then she would look up at me with that look of satisfaction, water dripping from her mouth as if to say, “Where’s dessert?”

Pet owners know how much we miss those moments and many more. If I wasn’t awake by 8 a.m. she would put her paws and face up on my bed and start licking my hands, arms and face until I was. Then she would continue until I got out of bed and went about our morning business: her breakfast, my pills and then our walk around the neighborhood until she found the right grass — or ice plant — to do her business. On those walks we would talk. She would look back at me and wait and then go back to sniffing everything as we walked by.

Yes, we remember the moments, the feelings, the love and companionship that made that relationship so special. Furry and feathered friends will do that.

Young Bella went back to be with her mama — where she belongs — after she was diagnosed with a serious illness. Now is the time we have to say good-bye and let go. It’s a hard thing to do. Those who say, without emotion, euthanasia is an act of mercy, probably never had to make that decision. I’ve known Bella for eight years, lived with her for one. Her mama has lived with Bella for all of that lovely dog’s 13 years. What a painful choice, a painful moment, to make the decision to administer that “act of mercy.”

There’s no mercy knowing this lovely soul will no longer be in our lives, no mercy as we watch her gasping because she can’t get enough oxygen with her normal breathing. No mercy watching her lay there without any interest in her food. Yes, her struggle and suffering will end, but there will be no mercy for those of us who will mourn her passing.

We can take solace in our love for a furry companion who loved us with a devotion we could never equal.

Love is just a four letter word with three stages

Body image about being healthy and happy

Trust: Where Are You?