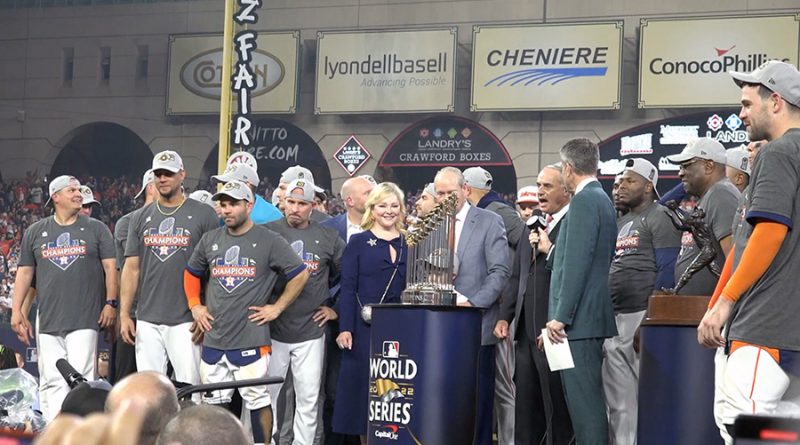 The 2022 World Series is over — and has been over for some time now —  and to very little surprise, The Houston Astros now have their second Commissioner’s Trophy. And the young and very talented shortstop, Jeremy Peña is the recipient of the 2022 Willie Mays trophy — the World Series MVP.

Peña is just the ninth person to win the League Championship MVP and the World Series MVP in the same year. He is also the third rookie to win the Willie Mays Trophy.  He’s a good shortstop who hit .400 during the series and made some spectacular defensive plays. People wondered if he would be as good as Carlos Correa who is now with the Minnesota Twins. Peña is not as good as Correa — he is much better.

Winning the World Series is a hell of a thing. The team has to win four of seven games to win it and regardless of how many games were played, the winning teams will tell us none of it was easy.

Making it to the postseason isn’t easy. And then winning three out of five then four out of seven before getting to the Fall Classic, it’s very hard to win a World Series. Well, the Astros sort of made it look easy by sweeping the Seattle Mariners in the Divisional Series and then sweeping the New York Yankees in the American League Championship Series. Damn, the Yankees … The Yankees with Aaron Judge, Giancarlo Stanton, Anthony Rizzo amongst a lineup of sluggers. The Yankees who had Gerrit Cole and Luis Severino in  their rotation. Well, pitching wasn’t their long suit this past season.

To be honest I didn’t think any American League team was going to win against the Astros in this postseason. When the San Diego Padres ousted the Los Angeles Dodgers in the NLDS I was quite certain the Houston Effin’ Astros were most likely to win the whole enchilada. The Dodgers had the best record in Major League Baseball with 111 wins. The Astros had the second best record with 106 wins.

The Atlanta Braves had 101 wins, the New York Yankees had 99 and the Philadelphia Phillies, the team with the most improbable success in the postseason, had just 87 wins — which is six games above .500. No donkey doo-doo. The Phillies didn’t have to defeat the Los Angeles Dodgers because the San Diego Padres defeated the Dodgers in the National League Division Series, three games to one.

Ironically, the starting pitcher on the mound for San Diego in Game 2 of the NLDS was Yu Darvish — the first game the Padres won in that series, by a score of 5-3 — which was the same score in Game 1, won by the Dodgers. Julio Urías got the W.

Darvish was the starting pitcher who was pilloried for his pitching in the 2017 World Series as a member of the Dodgers’ starting rotation. Having an opponent that is cheating will do that.

We all remember the dust-up the scandal created when it was revealed by Ken Rosenthal and Evan Drellich for The Athletic. General Manager Jeff Luhnow and field manager A.J. Hinch were first suspended by MLB and then subsequently fired by the Astros management. Boston Red Sox manager Alex Cora was also suspended by the league and then fired by the Red Sox … but they hired him back and as of now Cora is still the manager …  Hinch is now the manager for the Detroit Tigers.

Back to the 2022 World Series … Wait! One more tangent: It should also be noted — since he came in third in the vote for the National League Cy Young Award — Julio Urías got the W for the first game of the 2022 NLDS against the Padres. It was the only postseason win for the Dodgers.

There are a lot of questions about how Urías came in third, instead of first or second. He didn’t get any first place votes despite the fact that he looked like the best starting pitcher in the National League for the past two seasons.

That said, Sandy Alcántara of the Miami Marlins won the award — unanimously — because he threw the most innings, the most complete games and the most eight inning starts. Clearly those stats indicate Alcantara was the best starting pitcher in the National League for 2022. One of these days Julio Urías will win that award, if he can pitch deeper into games he starts. That’s not all on Julio. Dodgers Manager Dave Roberts and President of Baseball Operations Andrew Friedman need to let the young Mexican-born Urías do his magic for at least seven innings. And if Julio is up for it, let him pitch complete games.

Continuing the tangent, The Astros’ Justin Verlander won the American League Cy Young Award. It should be mentioned that Verlander got his first World Series win and he helped deliver a World Series title to Houston manager Dusty Baker II. The skipper had a World Series title with the Dodgers in 1981, as a player — an effin’ All-Star quality outfielder … Oh yeah, he won a number of Silver Slugger Awards and one Gold Glove award, and he was named the Series MVP for the 1977 NLCS, which was won by the Dodgers. Baker is the oldest manager to win a World Series. Congratulations Dusty Baker II for your World Series title. One more thing about the Astros skipper: He is a lock to be inducted into the Baseball Hall-of-Fame as a manager — and it would not surprise me if he was a first ballot All-Star.

Here’s something we can use to describe Dusty Baker II: Billy Martin was the Yankees manager in much of the 1980s. Those who are old enough to remember Billy Martin think of him and all the verbal and physical altercations he got into with players on his team, the other team, the umpires and most glaringly entertaining, George Steinbrenner, the owner of the Yankees, who fired Billy Martin … oh jeez,  gotta go look it up. Go get a drink while I consult the Google machine … Damn! Steinbrenner fired Martin five times! Here are some former ball players reminiscing about Billy Martin.

Look back on the life and legacy of Billy Martin at 7pm ET!#Billy | @Yankees pic.twitter.com/jUJd9W6kSW

Now think of Billy Martin, one of the most volatile and embarrassing managers ever in Major League Baseball, then look at Dusty Baker II and imagine the absolute opposite to Martin. Dusty is beloved around the league, and especially by the men that he won the trophy with on November 5, 2022.

I’m sure Billy Martin had some good qualities, I just can’t remember what they were. Well, there was that commercial for Miller Lite he made with Steinbrenner …

I miss Billy Martin and I miss George Steinbrenner. But mostly I miss them arguing with each other. pic.twitter.com/gYVxj4caY4

As long as I’m going off on tangents, I would like to mention the Dodgers’ third baseman Justin Turner —JT — was awarded the prestigious Roberto Clemente Award for the philanthropic work he and his wife Kourtney do through the Justin Turner Foundation.

Game 3 of the 2022 Fall Classic was postponed due to rain so it took place a day later. The Phillies shut out the Astros causing the Phillies faithful to be exceptionally loud in Citizens Bank Park. Unfortunately for the Phillies and their fans that was the last game Philadelphia would win in the 2022 World Series.

The Astros lost game 1 at Minute Maid Park, but came roaring back in Game 2. There were many incredible plays in the series, in pitching, fielding and batting. Yordan Alvarez, for instance, hit the home run that clinched the World Series for the Astros.

Maybe it was no surprise to see Astros shortstop elected the World Series MVP. He was also the MVP in the ALCS. That’s a record worth mentioning in the MLB Hall of Fame. After winning the Commissioner’s Trophy, Baker said Jeremy Peña has a bight future in baseball … Ya’ think?

A potentially sad note for Dodger fans: the Team released 2019 National League MVP Cody Bellinger. He is now a free agent. He should go to the Milwaukee Brewers.

Below are the video reports by Claudia Gestro during the postseason, including the NLCS and World Series. Maybe next season the Brewers – my hometown team – can win it all … Yep, I’m a dreamer … Well, the Everly Brothers and me have different dreams.