Today the Los Angeles Dodgers will be celebrating Jackie Robinson Day at Dodger Stadium. It is an annual celebration held at all the stadiums in Major League Baseball. MLB Commissioner Robert D. Manfred, Jr. wrote about the day in this press release.

My observance of Jackie Robinson Day has been particularly meaningful this year.On Monday and Tuesday night, my wife and I spent four fantastic hours watching the biography of Jackie Robinson by Ken Burns, Sarah Burns and David McMahon. The documentary presents a flattering and nuanced picture of a truly brave individual.

Mr. Burns’ documentary contains many great lessons for all of us, and I was so moved by the film that I feel compelled to share with you just a couple of observations. First, while Jackie was a true hero, it is hard to watch this film without realizing that Rachel Robinson is an American treasure, a woman of substance and class who was a partner in every one of her husband’s amazing achievements. We should cherish her.

Second, it is a difficult task to effectuate change. Jackie Robinson knew from a very early age that change was needed in America. Throughout his life, he worked hard to find the right strategy to effectuate that change. At certain points, passivity was required and at others, Jackie felt the need to be more aggressive. Sometimes it was necessary to challenge the system, while at other times working within the system was necessary. We should respect the intentions of those who desire change and be slow to criticize the strategies selected to produce that change.

Third, sports are powerful. But, their true power is only realized when athletes reach beyond sports into a larger cause like the Civil Rights Movement. All of us at MLB understand that work remains to be done on the topics of diversity and inclusion on the field and in the front offices. Moving forward, we will continue to be inspired by Jackie Robinson’s story and instructed by his brilliance in selecting strategies to drive change.

Dodgers Set Themselves Up for Game 4 of NLCS 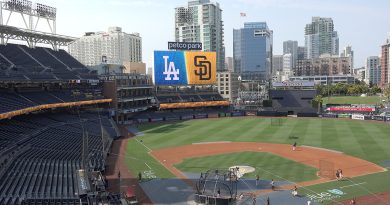