After Googling a bunch of statistics, I found out that a lot of people use Facebook for cheating purposes, so at least I’m not alone. Feel free to read (and post your own) Facebook cheating stories at www.facebookcheating.com #revenge

In the last few months on Mancation, I’ve used my Relationship Status like a “for sale” sign. I’ve made sure my account is public and my single status is waving in the wind. I do this because I love attention, I’m a little shallow, and I wouldn’t want Prince Charming to think I’m taken.

Obsessed about finding a “Token Facebook Official Boyfriend” one night while drinking a tall glass of Skyy Vodka (Shameless Product Placement), I decided to browse through other singles on Facebook. And that’s when I came across a sexy old acquaintance … and clicked “like” on his most recent photo hoping that he would see it and contact me. Within seconds he private messaged me asking for my phone number. What could it hurt? It’s always nice to catch up with a good-looking guy you haven’t spoken to in a while!

During our two-hour phone conversation not only did I run out of vodka, but he also asked me out on a date.

Our date began at an art gallery opening in Hollywood that I knew my girlfriends would be attending. My date was sweet, although relatively tattoo-less and there was an open bar so things were going pretty well. So well, in fact, that after no less than three strong drinks my girlfriends were taking photos of us secretly kissing in the corner. My friends and I have a pact that the more we drink the more photos we take of each other so in the mornings we can remember everything that happened the night before.

While uploading drunk selfies to Facebook I told my date that we should change our relationship status to “In A Relationship,” just to see how everyone would react. He thought it would be funny, so we did. With a quick Facebook click he became my Token Boyfriend.

Unfortunately, my Relationship Status update was seriously anti-climatic. I wanted to be hit by a magic lightening bolt or to see unicorns galloping around the bar, but all I got was another drink and I saw a midget walk by.  #hollywoodlife

In a hungover haze the next morning I slowly recalled my earth-shattering social media update. I still didn’t feel any different.  Perhaps it’s more important if you’re in a real relationship when you announce it, or maybe a relationship status update is pretty meaningless when you’re a 36-year-old adult. But I really thought I’d feel like Katie Holmes when Tom Cruise jumped on Oprah Winfrey’s couch.

Feeling let down by my new Facebook Status, I sent an “LOL” text to Token to see what he was thinking. Instead of changing ourselves back to “single” we ended up texting back and forth all day. We joked about what our friends might think of our new status, talked about meeting my parents and decided to go on a second date. 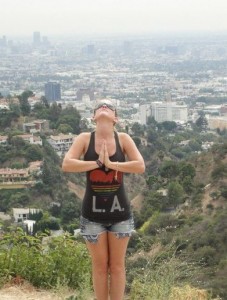 To look through my selfies and see all the awesome shit I do everyday, follow me on Instagram: FeatherGirl77.  If you need to tell me something amazing about your life you can do it on Twitter or Mancation on Facebook Tag me, Bitch!

All photos by Jaimie Beebe

Jaimie Beebe is 36 years old, single, modern, and a Renaissance woman. She’s a writer, world traveler, Playboy model, amateur magician, casting director, producer, band manager, and occasional star fucker (only the really hot ones).
At 17 Jaimie left home to follow the jam band Phish, spent months at a Rainbow Gathering, protested logging in Oregon, and made the local Ohio papers getting arrested for organizing a topless march.
Slightly famous for rebuilding her Hollywood Hills home in a bikini after a contractor stole her money and left town, she created an online webisode “Bikini Builders” where followers could donate money, tools, and supplies to recoup her losses. Scantily clad babes in bikinis on camera can accomplish almost anything.
Jaimie holds a Master’s Degree in Music Management and a Bachelor’s Degree in Photography. Working in the entertainment industry she has produced commercials and music videos with A-list clients. Currently she juggles running her successful casting career (www.jaimiecasting.com) with writing her blogs, reviews, and a variety of pieces for different publications.
Mancation is her documentation of adventures in dating. Join Jaimie in the struggle to find mister right, or possibly just mister right now in a world of online dating, social media, and crazy Hollywood nights. See our hero navigate the deliriously deranged dating world, and explore all the available options to sniff out a worthy contender.
Feel free to follow along on Instagram: FeatherGirl77 and Twitter @jaimiebeebe as well as Facebook www.facebook.com/mancation.story for a daily dose of her dating disasters.

Bling: The more you pay the more likely your marriage will fail

Fourth of July for singles