WASHINGTON — Five people were fatally shot and others were wounded Thursday afternoon in the newsroom of the Capital Gazette newspaper in Annapolis, Md., and a suspect is in custody, authorities said.

The spokesperson for the Anne Arundel County Police Department said the suspect is a white adult male. He said no shots were exchanged between

One was taken to University of Maryland Medical Center’s Shock Trauma, 28 miles away in Baltimore, but did not survive.

Phil Davis, Gazette’s courts and crime reporter, tweeted at 12:46 p.m. EDT that earlier he had hidden under his desk when he heard the shooter reload.

Davis told the Baltimore Sun, which owns the Capital Gazette, that a lone male suspect shot through a glass door to gain acr

The spokesperson for the Anne Arundel County Police Department, which is heading the investigation, had said around 4 p.m. EDT that “we do have injuries.” Lt. Ryan Frashure, who was at the scene, had told reporters that police didn’t expect “major casualties.”

He said the building has been evacuated but is still being secured to ascertain that a threat no longer exists.

Frashure said people being evacuated can be reunited with their families at the Lord & Taylor department store at the nearby Annapolis Mall. He said the media would be updated soon.

The Bureau of Alcohol, Tobacco, Bureau and Firearms tweeted at about 3:56 p.m. EDT that it was responding to the scene. About 10 agencies were assisting local police.

A few minutes after the news conference at the scene, President Donald Trump tweeted about the shooting.

Prior to departing Wisconsin, I was briefed on the shooting at Capital Gazette in Annapolis, Maryland. My thoughts and prayers are with the victims and their families. Thank you to all of the First Responders who are currently on the scene.

Earlier had Hogan tweeted that he was “absolutely devastated to learn of this tragedy in Annapolis.”

Absolutely devastated to learn of this tragedy in Annapolis. I am in contact with County Executive Steve Schuh, and @MDSP is on the scene assisting @AACOPD. Please, heed all warnings and stay away from the area. Praying for those at the scene and for our community. https://t.co/bI6PdUjHfh

Gun violence is good for business 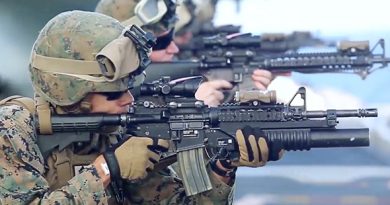 Decreasing the Cost of Mass Shootings