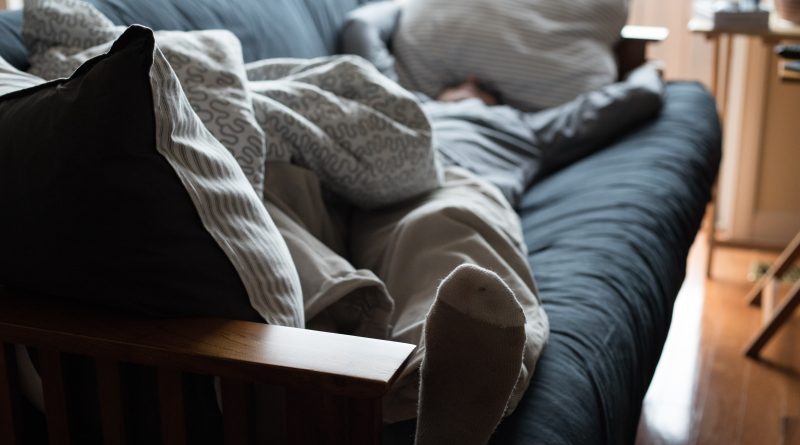 Recuperating from a thankfully mild case of COVID. (Shutterstock)

I’m just on the tail end of recovering from COVID.  Yes, I finally got it.

The good news is that I managed – through luck, thoughtful masking and crowd avoidance – to put off getting it until science gave me the vaccine and boosters to keep me out of the hospital, off the ventilator and, thank goodness, on the right side of the grass.

Believe me, in writing this piece I’m well aware that not everyone who has contracted COVID has been as fortunate. Far from it. According to the CDC, even now we are currently contracting COVID at the rate of 47,459 new cases per week. Weekly deaths are now at 565. Sure, statistically that weekly number is well below the daily count during the heyday of the pandemic, but still an awful, awful number if you’re one of 565 or their families. Whether we’re talking about deaths or unemployment, don’t ever allow statistical analysis to dehumanize and detach you from the real-life experiences those numbers represent.

The CDC is giving you “reported” data.  Actual rates of infection are likely much higher given that many infected people, children in particular, are asymptomatic. They can infect people to spread the disease, but their own illness goes undetected and unreported.

If somehow you didn’t get the memo about COVID and haven’t been vaccinated, don’t let my story of recovery suggest that you shouldn’t stop whatever you’re doing and get vaccinated right away. Do it. Unless you have some legitimate medical reason not to get vaccinated, why risk your life and lives of people you might infect for lack of something so simple?

Weeks ago, suffering from what I thought was and may have been – who knows? – a sinus thing that wasn’t going away, I made an appointment with my doctor.  Maybe he could prescribe something that would accelerate my recovery.  He did, but the problem persisted and I made a second appointment a week or so later.  As almost an afterthought, I took a home COVID test early in the morning before my appointment and tested positive.  I had been so careful, but there were those two lines. All the times I’ve tested over the past couple of years, and now two lines where one had been the standard response.

Okay, so I called my wife – literally on my cell phone. I was upstairs in our bathroom, she was downstairs making breakfast for my two grandsons who were staying with us. She came up. I stayed back, a good six feet, and pointed to the test that was sitting there on the countertop next to my sink. She subsequently tested positive as did one of my grandsons, but not the other.

Instead of an office visit, I had a tele-medicine call with my doctor. Given the familiar cold-like mildness of my symptoms together with otherwise good health, I opted against taking Paxlovid which can have side effects and I set my expectations for working through COVID over the next week or so. There was some meaningless speculation about how and when exactly we all got infected and who might have infected who. Stuff draining from my sinuses and coughing.  Re-acquainting myself with late night TV while trying to get intermittent sleep in the wing chair in our family room.  Coughing myself awake whenever I managed to doze off.

Turns out, it was well more than a simple cold, but tolerable given the short horizon to recovery that I was expecting.  A couple of over-the-counter drugs were helpful and a week or so later I tested negative on two tests, 48 hours apart.  Cured of COVID, technically, but I was still symptomatic. … For those of you interested in symptoms, I never had a temperature through any of this and my blood oxygen level remained normal all the while.  I love my touch-free thermometer and pulse oximeter.

So here I am, a full month after testing positive, probably somewhat longer since I was first infected and pretty much fully recovered … or am I? People who know me to be an energetic person have asked if I’m 100% yet. And the answer is, well, not really. The symptoms are pretty much gone, but what I am … What I have is this feeling that I’m “off.”  That it’s still me, of course, but different.

Not incidentally, I’m eight pounds lighter, due largely to the fact that the taste of even my favorite foods has been affected and I just haven’t been as interested in eating. Some foods tasted salty to me when they didn’t use to. So eight pounds lighter even though there were days when I lived on Coke floats. To be clear, COVID is not a recommended regimen for dieting.

Monday, a week, ago, Brett Maher, the kicker for the Dallas Cowboys, famously missed four consecutive extra points. It was a record-breaking performance that he would no doubt prefer to omit from his resume. Extra points are “chip shots,” virtually “gimmies” for a kicker of Mr. Maher’s expertise. Until Monday night’s game, Maher was 50 for 53 in kicking extra points this season and made 29 out of 32 field goals.  As far as I can tell, never in his four years in the NFL has Brett Maher missed even two extra-point kicks in a row.

People familiar with similar incidents of under-performance would have told Brett Maher to stay on the bench after missing two in a row – and to leave the stadium altogether after missing the third.  Because that’s all you can do when you have the “yips.”  Let it pass.

Yips is a real thing. Some serious medical specialists believe having the yips isn’t just a simple matter of chance circumstances or performance anxiety, but has to do with what’s called “focal dystonia.”  As I understand it, it’s a disorder that can cause involuntary changes in how muscles behave which – in a game of precision like golf, for example, or putting the side of your foot in the perfect position on a just-hiked football – can make all the difference in the world. … So “focal dystonia”? Well, excuse me, but I beg to disagree.

Sure, there may be a medical definition of yips, but I can tell you firsthand that there is a much broader explanation of the problem that seems, at least in my case, to be a consequence of COVID.

In my world, post-COVID as it were, yips is the hard to describe, but nonetheless real feeling of being ever so slightly different, of being “askew” as comedian Lewis Black would put it. It’s not about standing in front of a refrigerator, not remembering why you’re there, to get what exactly. We’ve all done that from time to time. Or putting something away in the refrigerator when it goes in the pantry.  The point is, yips isn’t about making an incidental, occasional mistake.  Even baseball’s greatest hitters miss the ball or strike out now and then. It’s to be expected, especially when precision is necessary to do it right.

Turns out, so I’m learning, a lot that we do is, in fact, a matter of precise, very careful motion – physically and intellectually. Affect how our minds see a particular ask, however minuscule the change, and we behave differently. Differently enough that we can feel it. It’s the sense of being “off” that I’ve been talking about – with the anticipation and hope that our brain will auto-adjust its focus with the guidance of long-term experience.

Last week, doing some very routine reorganization of my shop in the basement, I removed remnants of a decades old alarm system from the wall and inadvertently cut off landline phone service to the entire house. Trust me. I know better than to make a rookie mistake like this – or at least I used to before COVID. But somehow now I missed a setting or checkbox in my head. And I’ve actually dropped stuff, as in like I misjudged how long to hold onto it. … I don’t drop stuff. Little kids do that.

“So, who needs a landline anymore anyway?”

That’s precisely how I feel – at least until I can figure out how to reconnect it.

And I just picked up the bottle of root beer I’ve been drinking while editing this piece and tried to take a swig from it – without removing the screw-on cap I’d put back to keep the carbonation inside.

“I’m surprised you admitted that.”

Yeah, me too, but then talking about it helps me make my point.

Mind you, I don’t think this is the “the fog” some COVID survivors talk about, although I’m sure that fog is a real thing. No. I think I’ve come down with a COVID-sponsored case of the yips. I’m guessing the underlying cause may have something, maybe everything to do with the poor quality of the sleep that I’ve been getting for a month now. Longer, intense napping has replaced those wonderfully short twenty-minute power naps that used to be a highlight of my day.

Full disclosure, I believe in The Force. Well, sort of. More to the point, I believe in you. In the guy or girl working in the carrel next to you. And in me. I believe that we have something going on between all of us, collectively, that is more than the simple sum of us individually and a powerful “thing” in its own right. I believe that we’re more than just toddlers sitting around a table at preschool playing, but not so much with each other.

With over 100 million known cases of COVID and millions more unreported, I’m wondering. I’ve read in various articles that Americans as a people may already be sleep-deprived for whatever reasons. Now add the lingering effects of COVID on top of all that. Could it be that our national consciousness has a bona fide, hopefully short-term, case of the yips? With what consequences for our culture, politics and, heaven forbid, national security?

Les Cohen is a long-term Marylander, having grown up in Annapolis.  Professionally, he writes and edits materials for business and political clients from his base of operations in Columbia, Maryland.  He has a Ph.D. in Urban and Regional Economics.  Leave a comment or feel free to send him an email to Les@Writeaway.us.

Deflated: The end of controversy in Foxborough

NFL Divisional Week was not boring