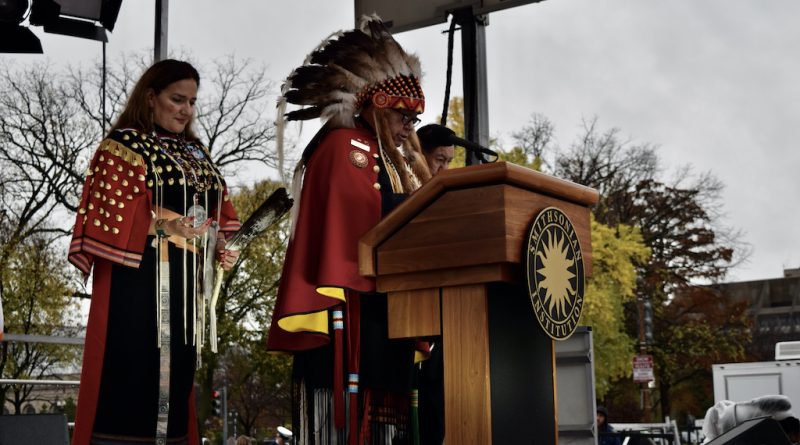 Listen to this article
By GRACE YARROW

WASHINGTON — Raindrops ceased and a rainbow stretched over the horizon Friday afternoon as speakers honored Native American veterans with the dedication of a memorial in Washington.

The National Native American Veterans Memorial was dedicated on the National Mall on Veterans Day, exactly two years after the memorial first opened.

“How humbled and grateful we are that this national day of recognition has finally come full circle to honor our Native American warriors, past and present,” Kiowa leader Robert Short said in an invocation.

Before the memorial dedication ceremony, Native American veterans from almost 125 tribes and communities took part in a procession.

The dedication marked the start of a weekend of events honoring Native American veterans and celebrating the memorial’s dedication. Events planned for Saturday and Sunday include music and cultural performances, film screenings, panels and crafts.

A permanent testament to the service of Native Americans in the military, the memorial is a tall stainless steel circle lifted over a stone drum. Around that is a round space designed to encourage visitors to gather and reflect just outside the Smithsonian National Museum of the American Indian.

Visitors can tie prayer cloths onto four lances placed around the perimeter of the area. Incorporated into the memorial is a speaker playing a loop of thirteen different veteran songs from various tribes.

A group of judges selected the design of Harvey Pratt, a veteran and member of the Cheyenne and Arapaho Tribes of Oklahoma, out of over 120 artists’ submissions in 2017.

The memorial is the first to highlight the sacrifices of Native American veterans on a national scale and is the first memorial ever to be constructed on Smithsonian grounds.

Congress in 2013 authorized the National Museum of the American Indian to create the memorial to honor Native Americans in all branches of the military.

Cynthia Chavez Lamar, director of the National Museum of the American Indian, wiped tears from her face as she thanked attendees for their sacrifices.

“The museum is proud to be the home of the memorial,” Lamar said. “And we’ll carry out our responsibility to forever welcome and honor veterans and educate people about the extraordinary military service of Native veterans and active duty service members.”

USO in Nevada is working for the veterans