On Monday I was reading my friend Jeff’s post about the newly created Space Force. Jeff, by the by, is the guy who, in 1982 or 83 (or ’84, who can remember. Some of those years are a bit hazy) introduced me to the movie Blade Runner the book it was based on, Do Androids Dream of Electric Sheep and its author Philip K. Dick. Until the movie came along few people had heard of Dick. His fiction is, well, depressing. Very prescient, with little hope and more visions of ecological and human decay most people can handle in a novel. Novels are supposed to be uplifting and entertaining! Philip K. Dick is only one of those. Jeff and I have yet to see Blade Runner 2049 together, but we will.

I have read several of his books and am now binging on the Amazon Prime series Man in the High Castle, which is based on another Dick novel. What would life be like if …

Anyway, Jeff’s post is funny, in a “We’re fucked” sort of way. How much more dystopian will this world get with Donald Trump in the Oval Office? It’s a rhetorical question, but with at least one year left in his administration it will be answered anyway. And painfully for some. He has already made moves to kick 700k people off food stamps.

We thought 2017 was bad, then 2018 rolled around. The silver lining was the “Blue Wave” that swept through the House of Representatives, but for some horrible political math reason, skipped the U.S. Senate. Then we were rushed into 2019 and good god almighty, members of Congress — from both houses — are parroting Russian propaganda conspiracy theories to defend President Trump’s criminal activity.

We’ve almost forgotten about the babies in cages, the proposed lists of American Muslims, the refugee camps in Mexico, just south of our Southern border, where tens of thousands of people wait in the worst kind of squalor to get their asylum claims adjudicated in U.S. immigration courts. Maybe we should put all the white supremacists on registries, since they are the biggest and deadliest terrorist threat in America. A registry that includes the number of firearms they own and exactly what kind.

It reminds me of the old Shepherd Express days when we ran articles about the local white supremacist skinheads in Milwaukee. They burned down the garage behind our office building, which was actually an old house in River West. Those little Nazis don’t fuck around.

The slow death of the Trump cancer continues to eat away at the fabric of American life. It was none too perfect before Trump, but now it is nearly as bad as any Philip K. Dick novel. It isn’t the German Third Reich and Imperial Japan that has divided America, but the seeds of racism and xenophobia that have existed for centuries have been watered and fed by the daily onslaught of foreign manipulation. Just writing it makes it look like a conspiracy theory itself … but then we get news that all 17 of our intelligence agencies confirm it, with news about Facebook and Twitter being used by Russian bot farms to spread racism, fear and hate.

We’ve seen how dystopian it has become since Donald J. Trump started running for president. Anti-Semitism and hate crimes are at an all-time high in America. White supremacists love Donald Trump — he speaks for them. The Republican Party, with its full-throated support and defense of Trump, tacitly embrace white supremacy, but they also support the brutal dictatorships beloved by Trump, starting with the one in Moscow.

Trump loves Saudi Arabia. When Trump visited the Kingdom in 2017 the Saudis flashed a giant picture of Trump’s face on the side of a building and let him fondle their glowing globe. That was nice. He has traded “love letters” with the dictator in North Korea, the guy who is building up a nuclear arsenal, complete with the midrange and long range rockets to deliver the payloads.

Good thing we stopped doing military exercises with the South Korean and Japanese governments. North Korean dictator Kim Jong-un might get the idea we oppose his family’s regime if we continued working with our partners on the Korean Peninsula.

What’s up is down, what’s in is out — which reminds me: Did you see the clothes Patriots QB Tom Brady was wearing? There was a photo on Instagram. C’mon Tom! You’re not a mime performing in Paris! Am I too harsh?

What athletes are wearing is of little consequence in this world. Sports is just entertainment and the two Associated Press athletes of the Decade, LeBron James of the L.A. Lakers and tennis star Serena Williams not only rule their sports, they are not afraid to get into social issues. Serena Williams, in my rarely humble opinion, is the Athlete of the Decade.

With the new year just hours away, we are supposed to be looking ahead with optimism for the future. Things will turn around in 2020, we hear that little voice telling us. With 15 people running for the Democratic nomination for president we’re bound to get one that can successfully challenge the criminal occupying the White House.

Who can remember all 15 of them? It’s easier to remember the two Republicans running against Trump, Former Massachusetts Governor Bill Weld and former Illinois Congressman Joe Walsh. But we do constantly hear about the front runners: Former VEEP Joe Biden, Senator Bernie Sanders, Mayor Pete Buttigieg and Senator Elizabeth Warren. Oh, and the two billionaires Tom Steyer and Michael Bloomberg. And Andrew Yang, another rich guy.

Wouldn’t it be nice to read and hear more about these other candidates; Senators Cory Booker and Michael Bennet? Or how about former Secretary of HUD Julián Castro? Senator Amy Klobuchar gets mentioned in the news quite a bit for being a centrist.

The problem is on some issues we can no longer be centrist. Like the Climate Crisis. We’re actually in the Sixth Mass Extinction. Can humankind survive such a cataclysmic event? Miami will be under water in the next 10-15 years. Around the world, in places like Sri Lanka and Bangladesh there are already thousands of climate refugees. No, we don’t have any room to be centrist with the planet. And make the case of how much money we save now and in the future by dealing with the climate crisis now, decisively.

We have to deal with the issue of race, the original sin of the American Experiment. It’s time to talk about and right the wrongs of slavery and the genocide of the original people of this continent. White supremacy is the number one terrorist threat we face today and it needs to be addressed. We can’t afford to take any centrist position on race.

And why in the hell do we still have a for-profit healthcare system? Every indicator, every measure of healthy living/lifestyle success shows that nations that see health care as a human right, not as a profit base, have better health outcomes and spend far less than the U.S. on health care, per capita. Medicare for all is the right answer, universal health care and give people the option to pay out of pocket for private insurance if they so desire. But the candidates who support single payer have not made the strong case for it, or haven’t shown the American public how each of us would save money. Sure, we’d pay a little more in taxes, but we wouldn’t have all those out-of-pocket payments, nor would we have to wait for some bean counters to decide if we deserve to get procedures and therapies ordered by our doctors.

Business Insider has this report about the health care costs of 21 countries and the U.S. pays far more than the average, per capita. Over $10k per person (not per family) as compared to the average of $3k in other nations. For a family of four that’s a savings of about $30k per year, maybe more, depending on the size of the inevitable tax increase. Make that fucking case about health care, Bernie and Elizabeth. All the candidates have experts who can do the numbers and present it in plain every day American-speak. Stop sounding like you’re just campaigning.

Add all that up — and more — and Senators Bernie Sanders and Elizabeth Warren appear to be the obvious choices for president. But … electability. They poll better than Trump, but can a wave of Bernie or Warren supporters help flip the U.S. Senate? None of those things can be achieved with Moscow Mitch McConnell as Senate Majority Leader and so far Bernie — nor any of the candidates for that matter — have addressed that issue.

When we look at all the Senators who are, or were, running, not one makes flipping the Senate a priority. It should be right up there with removing Trump from office. If we vote out Trump, but his sycophants still control one house of Congress, nothing changes.

Forget this talk of bringing the nation together, looking for common ground and bipartisanship. It sounds nice, but Barack Obama tried that once and how did that turn out? We have to look at the issues, like federal judges, the same way the GOP does. And like it or not, we have to treat the GOP (and their supporters) the same way they treat the rest of us, the majority in this country — with contempt. You gotta love the way Jordan Klepper makes the point for The Daily Show with Trevor Noah.

We need to bury the Republican Party in 2020 and that requires the right candidate, with long coattails, to be the Democratic nominee. Idealism has to take a back seat in this one. We can hold the feet of the office holders to the fire after the election, but we need to put the right people in control of Congress and the White House.

Those are my thoughts on 2020. And I want to win the lottery, visit a few beaches in the Caribbean, spend a few weeks in Hawai’i filming big wave surfing and possibly humpback whales, and swim in the Florida Keys. Is that too much to ask?

One last thing: We should listen to more Dead & Company in 2020.

Have a Happy New Year. 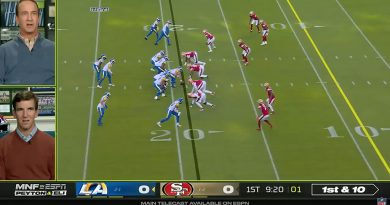 Taking Note of a Few Things: The Manning Family Edition

Everyone is Ready for Super Bowl LVI