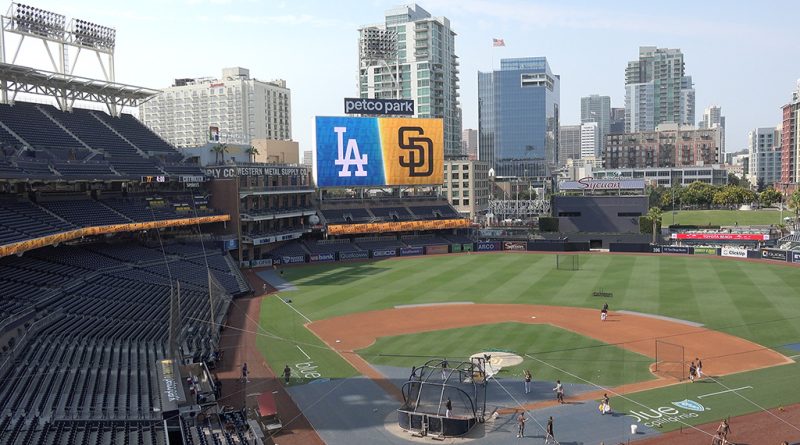 The National League Divisional Series between the San Diego Padres and the Los Angeles Dodgers has moved south to Petco Park in San Diego — the house that Tony Gwynn built. Youngsters who weren’t old enough to see Gwynn play know his name by the statue that is out in front of Petco Park and Gwynn’s son, Tony Gwynn, Jr.

The younger Gwynn played some major league baseball and has now settled nicely into being the team’s baseball analyst and ambassador. The Senior Gwynn, died of salivary gland cancer in 2014. In his 20-year MLB career Gwynn’s batting average was .338, with 1,138 RBI. Mr. Padre is not forgotten in San Diego.

That’s some of the background context for Petco Park. The Midsummer Classic was held there in 2016, which was also the last year the Padres hometown fans saw a playoff game in their downtown ballpark. Now there will be at least two.

The Padres had tough going in game 1, which was at Dodger Stadium, but made a substantial comeback bid in the fifth inning when first baseman Wil Myers homered to left to get the Padres on the scoreboard.

For the most part the pitching from both teams was good and both bullpens didn’t allow any runs, but the game ended with the Dodgers leading, 5-3. After the game Padres manager Bob Melvin told the media, “No moral victories, but the latter part of the game was better than the first part for us. ” He also said, “We felt like we had a chance in the latter innings to win this game,”

On Wednesday night the game was quite different. The final score was the same, but it was flipped: San Diego won 5-3. San Diego third baseman Manny Machado started the San Diego scoring with a solo homerun off future Hall-of-Famer Clayton Kershaw’s best pitch, the slider. It was left hanging in the middle of the zone and Machado sent it 381 feet into the left field seats.

In the bottom half of the first Dodgers first baseman Freddie Freeman tied the score with his 401-foot solo home run off Yu Darvish’s cutter that was left hanging in the strike zone. Max Muncy would hit a solo home run to give the Dodgers the lead, but in the top of the third the Padres would add two more runs.

By the end of the game both Machado and  Jake Cronenworth each had two RBI and they each had a home run.

At the end of the regular season the Los Angeles Dodgers had not only the best record in baseball, but a franchise record of 111-51. In Spring Training manager Dave Roberts said that if their pitching stayed healthy the Dodgers would win the World Series. That’s a very bold prediction to make before the season gets under way. The young ace for the Dodgers, Walker Buehler had season-ending Tommy John surgery early in the season — his second such surgery in his young career, yet Los Angeles finished with the record, but also with the best pitching, with the lowest team ERA of 2.80.

Current Los Angeles starters begin with Julio Urías who had a good start in Game 1, plus Kershaw and Tyler Anderson who has a 2.57 ERA. In game 3 we will see the return of starter Tony Gonsolin who has a record of 16-1, and an ERA of 2.14. He is also coming back from a forearm injury so his pitches and innings will be restricted.

Blake Snell gets the start for the Padres. His record is 8-10, but his ERA is 3.38. It will be interesting to see how well Snell pitches against the Dodgers. The last time Snell faced the Dodgers he held them scoreless over five innings. The Padres went on to win that game (Sept. 27) 4-3.

If San Diego wins game 3 tonight, they will be in a commanding position when Joe Musgrove takes the mound on Saturday for game 4. It’s not a stretch seeing the Padres close out this series and move on to the National League Championship Series. Los Angeles needs to win game 3 to get the confidence to close out this short, best of five, series. As Dodger fans every where know, their team hasn’t lacked confidence these past few years. They have what it takes to win it all so now the Dodgers just have to go out and do it. If you’re going to talk the talk, Dave Roberts, you better be able to walk the walk.

There will be postseason baseball at Petco Park once again. Tune into FS1 to watch the game .

In other baseball news: The Houston Astros have taken a 2-0 lead in their series against the Seattle Mariners. It appears Houston is dominating the American League, but we won’t know that until they make it to the ALCS and then the World Series.

As of this writing, the Cleveland Guardians are leading the New York Yankees 4-2 in the 10th inning. The Yankees won their division with the second best record in the American League. Cleveland and New York are playing game 2 today because it had been postponed due to the weather.

In the National League the Philadelphia Phillies have tied their series with the Atlanta Braves, 1-1. As of this writing the Braves and Phillies are both scoreless in Game 3.

Late breaking news: Chris Taylor with start in left field for the Dodgers. He says he feels “100%.”

Legendary reliever and Hall-of-Fame pitcher Bruce Sutter died on Thursday (Oct. 14). He was 69. He was the first pitcher to use the split-finger fastball and with the Chicago Cubs, won the 1979 Cy Young Award and in 1982 helped the St. Louis Cardinals defeat the Milwaukee Brewers in the World Series.

Opening Day: beware of the signs