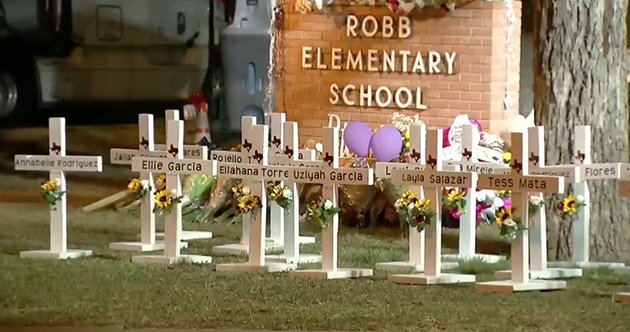 The more news we hear from Texas concerning the bloody massacre of children and two adult teachers, the angrier I get. Just heard this: the police officer whose wife was in that classroom being murdered, was restrained from going into the classroom to save his wife and the kids — and he had his sidearm taken away.

The head of the Texas State Police (Texas Rangers) called the law enforcement response to the massacre an “abject failure.” The massacre could have been ended within the first three minutes — if law enforcement had done what it is supposed to do in active shooter situations: Attack the shooter and neutralize him as quickly as possible so the killing can be stopped.

According to the report, none of the officers on the scene tried the door knob to see if it ws locked — it wasn’t. They had the shields and body armor they claimed they were waiting for. Watch this video as the abject failure is explained.

This reminded me of the Las Vegas Massacre when a gunman opened up on a crowd of country music concert goers, killing over 50 and injuring hundreds more. I remember watching the videos from the hotel cameras in the hallways and stairwells, how timid the police officers looked as they thought about? Debated with each other? Who knows what, as the gunman sprayed the crowd with near automatic gunfire because his AR-15 was fitted with a bumstock.

Remember that scene from Animal House, when Kevin Bacon’s character is getting paddled on the ass as an imitation into the fraternity? “Thank you sir! May I have another?”

Although I’m not sure who is holding the paddle in the gun lobbying business. Maybe they take turns paddling one another, with reach arounds included for the most successful lobbyists. Actually, I believe the GOP in Congress are the ones asking for another and maybe a reach around too.

Let’s not get too deep in the weeds with that analogy.

Uvalde Mayor Don McLaughlin was visibly angry and frustrated at the ever changing stories in the wake of the massacre. McLaughlin lashed out at the Texas Department of Public Safety and the law enforcement arm of the department — the Texas Rangers —for not briefing anyone in Uvalde’s government on how the investigation into the massacre is going.

Uvalde police chief Pete Arredondo: “Who wants to break down this door and rushing into the shooter’s kill zone? … Okay two. All in favor of waiting here until the janitor brings the keys … (counts) … 16. And I make 17! The wait for the keys crowd wins. He Joe and Ed, grab Johnny and don’t let him rush into that classroom to save his wife. Take his gun away from him”

That’s probably not how the conversation went, but true confession: I’m as cynical as they come. A pessimist who sees all the darkness and a few bright rays of sunshine and bright rainbows everywhere. I’m really trying to change — honest!

Arredondo said the classroom door had a steel door jamb so it was impossible to break in … Hmmm, yeah, but the door wasn’t locked. You know, if you watch enough Mission Impossible movies you will learn nothing is impossible.

Same holds true for James Bond movies, especially the ones with Sean Connery and Daniel Craig. Remember MacGyver (my mom loved MacGyver)? He could do anything with a piece of chewed bubble gum, a little bit of duct tape and the bobby pins out of the secretary’s hair.

Anyway, the story from Arredondo … evolves might be a polite way to put it … as little bits of the DPS report leaks out.

The people of Texas, and  Uvalde in particular, want some answers, some transparency in the investigation. The parents of those murdered children and the families of the two teachers deserve to know what happened and why, no matter who is exposed as a chicken-shit coward.

There is some gun safety legislation moving through Congress now. In the Senate it has all the Democrats and 15 Republicans, including Sen Ted Cruz of Texas.

It’s watered down, but it’s something. Hopefully it will lead to more gun safety legislation, but for now we should be happy with any low hanging fruit we can get. 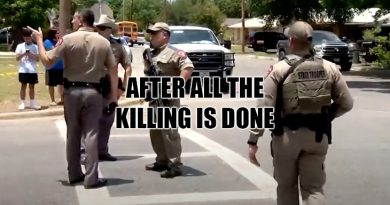 Texas Rangers have a Super Bowl champion in camp