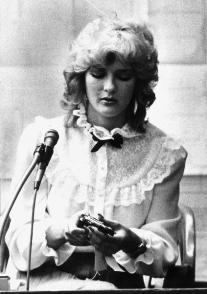 I first met Laurie Bembenek in the late 1980s while she was serving a life sentence for killing her husbands’ ex-wife. The former Playboy cocktail waitress, and Milwaukee Police officer maintained her innocence her entire life, claiming she was framed for filing an EEOC complaint against the MPD.  She was convicted in what was called the most circumstantial case in the history of Wisconsin. She escaped not long after I wrote a series of articles for the Shepherd Express questioning her conviction and uncovering evidence along with private detective Ira Robins that was later used to help her negotiate a plea deal, which led to her eventual freedom.  She died of liver disease Nov. 20, 2010.  In my files, I found one of her unpublished and untitled poems she mailed  to me about life at Taycheedah Correctional Institution in Wisconsin.  She loved to read; she loved to write and she loved freedom – something she never captured in life even after being released  — Timothy W. Maier

It now takes more than one hand

To count all the birthdays I’ve spent here.

Waiting in a dark office one cold morning

I glanced up at tree branches outside

that after years of being subjected to  so

degradation and intrusion, after being

(to the obvious delight of two lesbian guards)

after being forced to use the toilet

in front of many strangers,

after being seized in the middle of the night

to shovel snow or to urinate into a cup

after year upon year of sensory

of being mental sodomy

you would think that the small punishments could be ignored

when we are loudly warned,

not to let a visitor kiss us again,

when we are ordered to do meaningless

work and then to lose 2 days pay for being late,

when we are helplessly moved from place to place,

when we are denied a package of cookies from home;

but this deathless oppression only grows

I am tired of wondering

how many fascist assholes read my letters

(and then wonder if they will

of being monitored by cameras,

ruled by a lack of alternatives and the

sounds of belts, keys and walkie-

I can no longer watch the children

Outside the fence crying:  “But Mommy

I don’t want to say good-bye.”

I have no children but I feel like that

I look quickly away

from the red-eyed women. I

I can’t stand the paranoia, the worry and despair.

It feels as though I could explode

Hurt then They would win.

I would only trade my poignant reality

For psychotropic drugs and paper gowns.

So I gather up another armful of resistance

Lawrencia “Bambi” Bembenek (August 15, 1958 – November 20, 2010), just wanted to be called Laurie. The former Milwaukee Police Department officer was convicted of murdering her husband’s ex-wife, Christine Schultz, in Milwaukee, Wisconsin on May 28, 1981. Her story generated national attention after she escaped from Taycheedah Correctional Institution and was recaptured in Canada. Her story inspired books, movies and the slogan “Run, Bambi, Run”. Evidence uncovered by private investigator Ira Robins and reporter Timothy W. Maier helped grant her a new trial. She pleaded no contest to second-degree murder and was sentenced to time served and 10 years probation. But for years after that plea, she sought to have the sentence overturned. Bembenek was a former Milwaukee police officer who had been fired and had gone on to sue the department, claiming that it engaged in sexual discrimination and other illegal activities. That evidence including graphic pictures of nude police officers – including photos of her husband – engaging in lewd acts had disappeared until Robbins and Maier found those incriminating photos of the MPD that she had turned over to authorities. She worked briefly as a waitress at a Lake Geneva, Wisconsin., Playboy Club. On November 20, 2010, Bembenek’s liver and kidney failed. She died at a hospice facility in Portland, Ore. She was 52. For more on the case see http://lauriebembenek.blogspot.com. The contact the author email goes to Bembenek’s private investigator Ira Robins.

Playboy models talk about the magazine, the founder and the celebrated parties

Playboy celebrates 60 years of publishing with its LA institution