The Los Angeles County Fire Department is tweeting news about the Sage Fire that started near Santa Clarita and has now burned 800 acres. Over 2,000 people have been evacuated, although no structures have been damaged.

Ground and air crews are fighting the fire, which has been creeping close to Los Angeles County all day. The fire was first reported about noon and some witnesses claim it was started by a car that went over an embankment. Authorities have not confirmed that. Three firefighters have minor injuries.

The temperature had been as high as 88°f during the day and the winds and terrain have hampered the efforts. 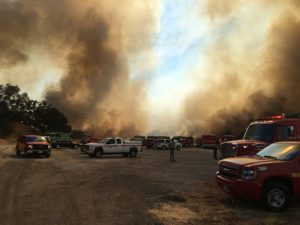 Morning Mist Community is under evacuation and 700 homes have been evacuated. Additional evacuation areas are:

There is an evacuation center at West Ranch High School, 26255 W Valencia Blvd, Stevenson Ranch, 91381 for those displaced by the fire. Right now the fire is 15 percent contained.

Boring is the one-word description of today’s cars

Holiday Vacation: The joys of Los Angeles and environs