In 1968 the Viet Cong with the North Vietnamese launched numerous attacks on several locations all across South Vietnam. It was the Tet Offensive, the beginning of the end of the war in Vietnam in which America was involved for twenty years. By the time the war ended in 1975 more than 58.000 Americans and 3,000,000 Vietnamese had died. 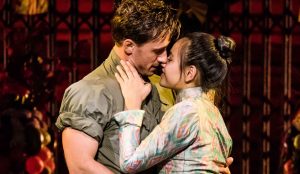 The musical play Miss Saigonis focused on activities and relationships occurring in those final days before April 30, 1975 when the capital city of Saigon was seized and renamed Ho Che Minh City.

This historical perspective is important to know because it sets the stage for the story being told in Miss Saigon. Yes there were beautiful young women, many working in bars catering fully to appeasing the lustful desires of American servicemen.  So in this contemporary version of Miss Saigon the show opens in a bar with many beautiful women and several American servicemen seeking some happiness in the ever growing darkness falling upon Saigon. This is where Chris and Kim meet. The music, the dancing, the singing are fully captivating and enraptures the audience completely

Soon Kim [Miss Saigon] and Chris connect and their love begins to grow. But then the Viet Cong and North Vietnamese Army penetrate the perimeter of Saigon and their inevitable success becomes obvious. Now many people including Chris are air lifted by helicopters, taking them from the roof of the U.S. Embassy in Saigon to U.S. Aircraft carriers waiting off shore. Kim is left behind.

Reading this fails to tell the story with the same passion as is presented by the magnificent cast and crew of Miss Saigon. The visual effects are stunning, the music is steady and beautiful. You may be sitting a hundred or two hundred feet or more off stage but it is so powerful that the entire audience is drawn into each scene.

But for America and its soldiers, including Chris, the war is finally over and so happily he goes back to his home in America, reunites with his hometown girlfriend and they get married. Kim on the other hand remains in the war torn remains of Ho Chi Minh City, formerly known as Saigon. Eventually Kim gives birth to a child fathered by Chris. Over time Chris is told of his child with Kim creating a significant stress point with his wife. 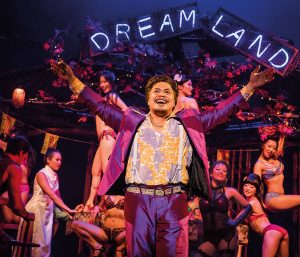 There is a very real and rather large tragedy in this element for it is typical when a foreign military force remains in a far off country for a while and then leaves. Often times they also leave behind children born to the single mom. But in this case when made aware of his child born to Kim, Chris and his American wife fly to Bangkok to meet Kim and the child.

When Kim goes to meet Chris she is stunned to learn that he has married another woman in America. The entire show is one never ending flow of deep emotion often mixed with both love and tragedy.

All of it reaches a staggering crescendo in its final scene. Think Madame Butterfly, then go see Miss Saigon at the Pantages Thratre. 6233 Hollywood Blvd, Los Angeles, California.

The Book of Mormon returns to the Pantages

Motown is back in our town