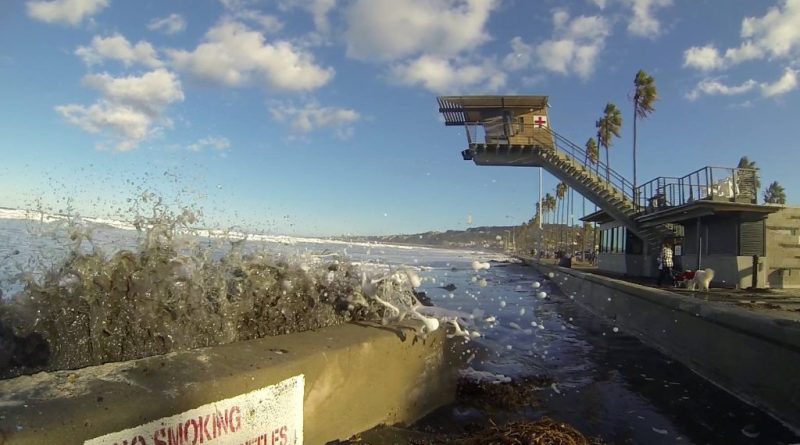 Sea level rise, coupled with more powerful storms slamming the coastline, beach communities will feel the wrath of the Pacific Ocean more often and for longer periods, that will require a large financial commitment to deal with the effects of these storms. (Tim Forkes)

The Los Angeles Times just published an article about the cost of the clean up after these recent rain storms. One of the major points being that we have a lot of fresh new pot holes. Also, 40 of California’s 58 counties recorded some damage and expected costs from the storms could top $1 billion dollars, and of course right now that is just an estimate and we should expect that number changes frequently over the next few months. There is a pay wall to read their article.

There were more than 500 landslides that left boulders and dirt on roads and highways.

The effects of the winter storms that have plagued the entire continent have been recorded by scientific organizations and the media, like the Los Angeles Times. And the common prediction from all is that it is only going to get worse. This year, 2023, is expected to break records for extreme heat and storms, i.e. hurricanes and tornados. That is the cost of doing nothing for 39 years and not enough last year.

Getting more done now, after the 2022 mid-term elections, is a fantasy. Now that the Republican Party, i.e. the party of liars, conspiracy theorists — thieves — and nut bars, now controls the House of Representatives. The Grifter Party controls one element of government and their priorities are to investigate the Biden Family, especially Hunter Biden and his laptop — I still don’t know what we should expect to find on it. Remember that final Benghazi committee which was supposed to expose the smoking gun that the Secretary of State at the time, Hillary Clinton, was all to blame? We should expect the same from this Hunter Biden investigation — bumpkis.

It’s hard not to go into these tangents because they are all — tangentially (in the divergent and digressive meaning) — connected.

We know what the GOP, the Grifter Party, wants to do while they are in power. One of the worst, most damaging plans is to hold the full faith and credit of the U.S.A. hostage, i.e. raising the debt ceiling.  The thieves actually want to cut — slash — veterans’ benefits, benefits of serving members of the military, Medicaid, Food programs and health care for children as well as all people living in poverty. And they want to slash Medicare and Social Security. Seriously, Medicare and Social Security. Begs the question: how the hell do Republicans get elected enough to control the states of Florida and Arizona? They get people whipped up over culture issues., but that’s a story for another time.

That is their agenda — cut Social Security, Medicare, Medicaid, any programs for the poor and benefits for veterans and currently serving members of the military.

So the thought of getting any meaningful climate crisis legislation through Congress to the president’s desk to be signed is wishful thinking at best. We may be off in LaLaLand thinking we could see more climate legislation during this Congress, but our hearts are in the right place.

This is news I read on The Daily Kos earlier today: The latest ice cores taken from Greenland (That big island northeast of Northeastern Canada) show the island nation is 2.7 °f warmer than it was in 1995, the last time ice core samples were taken. That doesn’t sound like a lot, but that much rise in temperatures is a serious, alarming indicator of global warming. It means Greenland is losing much more of its glaciers each year. It would be a good bet that Greenland’s global warming issues get worse exponentially, like everything else connected to global warming,

Global warming legislation isn’t being held hostage in the House of Representatives,, it has been  pushed out into the cold to freeze.

What really got my dander up was news that the Grifter Party in the People’s House was actually putting the lying, cheating, thieving George Santos on two congressional committees: House Small Business Committee and House Science, Space and Technology Committee.

This week I was listening to some talking heads talk about the lying, cheating, thieving George Santos and it was their studied opinions Santos wouldn’t last very long. He is getting a lot of pressure from the New York State GOP. One after another members of New York’s Republican Party has stepped up to microphones to denounce the lying, cheating, thieving George Santos. Current members of the GOP in the 118th Congress are calling for Santos to resign and doing it publicly.

Anyway, the point is the GOP-controlled House of Representatives is pressured about Santos, as they try to get everyone on committees. And as an act of revenge they are kicking key Democrats off committees, which means when the committees hold hearings about crazy, stupid shit, like Hunter Biden’s laptop, there will be fewer Democratic voices to denounce the Grifter Party’s nonsense. Where’s that no nonsense guy from the Spectrum TV commercials when we need him?

Long story shortened, the House GOP won’t put up for a vote any legislation to address the climate crisis. They want to investigate President Biden’s mishandling of documents and the House Select Committee For January 6.

Right now the Grifter Party has a slim, four seat advantage in the House. If the lying, cheating, thieving George Santos resigns, That advantage is reduced to three. New York’s Third Congressional District will go back to the Dems.

We really don’t have the time to wait two years for the Democrats to reclaim Congress. We need bold climate legislation now. Last August Congress passed and President Biden signed, the Inflation Reduction Act, which includes $360 billion over the next ten years to address the climate. It is expected to cut greenhouse gases by 30-40%.

The bill will also spend billions on research for eco-friendly jet fuel, $490 million to NOAA for climate and weather forecasting, $50 million for research grants. The biggest piece of this climate legislation goes to tax credits for businesses that change to greener power sources.

There is much more in this bill which makes it the largest climate bill ever. But scientists say much more is needed. Even if all the benchmarks in this legislation are reached, the earth will still get get warmer by 1.5°C.

Scientific American has a great article that goes into much more detail. The bottom line is, we need to pressure the governments, local, state and federal, to do more. Here in California Governor Newsom and the state legislature are addressing the climate crisis. Newsom signed five of his six pieces of climate legislation that will set interim benchmarks for 100% clean energy, end new oil drilling near communities and regulate projects that remove carbon from the atmosphere and smokestacks.

The Golden State will once again lead the nation — the world — in addressing the climate crisis. On the bright side, we are moving in the right direction.

Super Bowl Week gets a review

Elections: It’s our problem to fix