Not sure if it is a case of writer’s block or the fact summer is here which affords us more time to get out and about and not be stuck inside. Either way, I find myself not being able to get excited enough to write a full column on the following despite having some level of interest in these topics.

Classic West: My favorite band, Fleetwood Mac heads up day two of this festival at Dodger Stadium. It might be a last hurrah for Mick and the gang given their age and increasing disinterest in recording a new studio album so I should want to hunt down some tickets to see them. Add the Eagles, Journey, The Doobie Brothers, Steely Dan, and Earth, Wind and Fire, and it spells out two days of incredible music from the artists I grew up loving.

Then again, there is traffic, parking, crowds, and the cost of food. Oh, and public bathrooms filled with people who have had too much sun and too much drink. No, I think I will wait and see if a DVD comes out or a live recording is released. Besides, what are the odds of me winning free tickets because I sure am not paying full price?

The NBA: Given that it was a pretty sure thing the Warriors and Cavs would meet in the finals again this year, and likely so next year, the NBA draft just was not much to get excited over. As a Laker hater, I am happy they landed Daddy Ball and his little boy because there are two D Bags that need to shut up and have their asses handed to them.

I will admit I no longer know what the heck Danny Ainge is doing with my Celtics. I can’t believe Red Auerbach would sit and wait for LeBron to get old and fade away while sitting on all the assets Boston has.

The Clippers have gone as far as they can with their bunch and look to make some moves. Still, this is the NBA and despite the term Super Team, it has always been a league built around a small selection of such groups. If your team is among the super, it’s fun to follow the season. If it is not, it’s pointless.

Trump Coverage: We all need a break from it. Let’s face it, it is one thing to cover the possible collusion with Russia from every angle possible, but do we really care about whether or not Trump drove his golf cart on a green at a club he owns? Does anyone take what a desperate, and apparently broke, actor like Johnny Depp says seriously and who are the Trump boys fooling with claiming to have the moral high ground on this incessant war of words between the left and right?

Trump will always have low approval ratings while at the same time appealing to a sizable bunch of people who are fed up with the U.S. government. Trump’s lies will have little to no affect on his supporters while only making his detractors come unglued in a way that makes even me question their sanity at times.

Let’s take a break and see what the investigators find and go from there. in the mean time, just be glad we do not live in Russia where dissent is handled a little differently.

We Miss You Sean: That said, I am like many who miss Sean Spicer. What a breath of comical air his briefings were. Unfortunately, since Donny can’t fire everyone who works for him, he has decided to just pay the guy not to speak in front of cameras so we no longer get his daily press briefings. I guess this all fits into Trump’s idea of being transparent, but I am not sure he knows the meaning of that term, as well as many others.

CNN tried to post sketch artist drawings in place of actual video, but all I saw was a guy who looked taller and thinner than Spicer. Wouldn’t it be great if they just hired Melissa McCarthy to reenact the day’s briefings in Sean’s place?

Bill Cosby: What a judicial train wreck. f the trial tells us anything, based on the jury vote, we live in a nation where one out of every six people think slipping a woman a few pills is okay because she was asking for it by the way she dressed.

What’s the message we send to young girls? It’s important to look good because we are a shallow and vain culture that appreciates physical beauty more than intelligence, but if you show off how nice you look, you deserve getting raped by men who haven’t got the balls to treat you like they would want their daughters treated.

Here is the sad part, there are probably more than a few towns across this nation that would love to bring in old Bill to educate their youth on how to treat women. Maybe he could go on a national tour with Charles Manson, OJ Simpson, and Phil Spector just to show us how to be a man in a society that cherishes women.

Nancy Pelosi Blues: Poor Democrats, they are the party that supports women and yet they seem to have been burned by them recently. First, it was their blind commitment to Hillary that cost them the general election last fall and now it seems their decision to lean on Nancy Pelosi may be serving the GOP better than it is their own party.

It does not help if people like Hillary and Nancy are considered part of the old guard in politics. They have been around far too long in the eyes of many and are seen more as part of the problem and not the solution.

Surely there has to be a new guard of women who can step forward and breathe in new blood and confidence for the left. Kamala Harris wants to, but is finding it a bit difficult to do so.

Without a strong group of women in the 40 to 55 year old range to continue the fight for more equality that Clinton and Pelosi have led for decades, Democrats run the risk of having to work more than they thought they would to hold on to the female vote.

If younger voters see the GOP as the party that promotes women in high places, whether it be a Nikki Haley or even the God awful Kellyanne Conway, it will have a subliminal effect that will hurt Democrats at the polls.

Football Is Almost Here: This time of year used to be set aside for baseball lovers as excitement would begin to grow over the upcoming All Star game. Now it just serves as a reminder once the game is played it is time to start thinking about all things football in the sporting world.

With the end of summer, we no longer start thinking about the fall classic nearly as much as the start of the NCAA football year with the arrival of Labor Day Weekend to be followed by the start of the NFL season the following weekend.

The NFL has masterfully conquered the sporting world through its constant year round coverage of not just the game, but the combine, the draft, OTA’s, free agency, summer camp, and even video games. It’s a promotional juggernaut whose only worry is whether or not the game will be outlawed due to safety concerns.

However, as profits rise, so does the league pay offs over lawsuits to former players left with permanent brain damage from a game the league wants us to believe has never been safer to play.

If you believe the game is safer, all I can say is an NFL city has a new stadium they want you to flip the bill to construct because after all, it’s all about the fans, right?

Top photo is a YouTube screen shot of Fleetwood Mac in concert, in 2014. 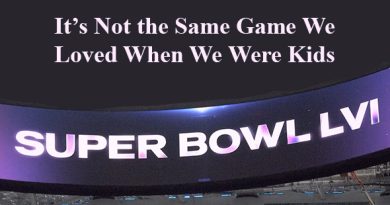 Football’s Grip All But Gone

Jahlil Okafor: The latest example of why the NBA needs to fix their Peter Pan Problem