I had a little time, so I thought I should bring this up: It’s about time for National Pretend to be a Time Traveler Day. Or almost time.

I saw it when I was looking up obscure holidays trying to figure out why people on the East Coast get more time off seemingly than the rest of us.

But if you grasp the concept of being a Time Traveler, it shouldn’t matter.

When it is it?

Does it really matter? Should it matter if you’re pretending to be a Time Traveler?

It’s December 8 – so you have plenty of time.

Why pretend? It’s a given that we are all traveling through time anyway. We are all Time Travelers. At least forward – without too much imagination at all.

But if you’re pretending to be a Time Traveler you need to expand on the concept. Expand at once – now, even before you start. If you truly want to emulate being a Time Traveler, National is far too limiting:

Think Interstellar Pretend to be a Time Traveler Day,

Galactic Pretend to be a Time Traveler Day,

Universal Pretend to be a Time Traveler Day or even …

Multi-versal Pretend to be a Time Traveler Day — all far more appropriate.

Or pretend not to be a Time Traveler.

How would that look?

Why is it we think of Time Travelers coming from the future? Why not don a tool belt, a tunic and a good sun burn, having just finished your shift, building The Pyramids?

Does National Pretend to be a Time Traveler start at midnight? Midnight where? Midnight everywhere? That would probably be zero hours UTC which works out to 4 PM Pacific, 5 Mountain, 6 Central, 7 Eastern. December 7th.

Start using it before it’s too late.

I just heard YouTube announce a concert at some time or another GMT, Greenwich Mean Time. Same thing.

See. The future is here.

Try it at Thanksgiving with the family. Time Travel and UTC.

Tell everyone you have an announcement to make. Then pause a moment. They will either think you’re announcing your engaged, you’re pregnant, coming out, have cancer, have super powers or you’re voting Republican.

Think how relieved everyone will be when you tell them you’re merely a Time Traveler.

The dog may bark at you.

What would a Time Traveler talk about?

How odd it is that weather modification and climate control is only in its infancy, here at the end of this decade and the start of the Tumultuous 2020s. The best you can do is turn up the heat, crank the AC or look up at the chem trails overhead for now.

Talk about how you want to visit some of the coastal cities before they are submerged under water or destroyed by super-storms.

How you like the architecture of all the old buildings.

Tell them in the future everything looks pretty nice. Pretty nice rolling down a residential street. Sprawling mansions, colossal structures, perfect lawns and perfect gardens. Until the power hiccups, the hologram projectors go on the fritz and you see everyone actually lives in tattered tents, cardboard boxes and recycled plastic containers. Open sewage and most of the trees and power poles have been chopped down for fire wood.

Power comes back up and everyone goes back on living the lie.

Pay no attention to that cardboard box with a projection of Mar-a-Lago over it.

Your sister asks you if you’ve started drinking again.

If you’re on acid. Do they still call it that during this period of time?

You shrug it off and ask if someone could pass the mashed potatoes.

As a Time Traveler, your Brain Implant is limited, by just the present day 4G and 5G, and you incur roaming charges.

You explain that you’re not used to talking so much, as in the future, you just transmit back and forth your conversations, communicating with other people, directly into their minds, via their wetware implants.

You’re sister speaks softly about perhaps doing an intervention – before you really get out of hand, with that one quiet brother of the ex-sister-in-law, whose name escapes you (especially given the limitations of your brain implant).

You lean over and get some more mashed potatoes yourself, and contemplate perhaps sculpting them into a model of Devil’s Tower.

Then you could strike up a conversation about Close Encounters of the Third Kind.

“Some of my best friends are from other worlds.”

Someone will mention how movies that were set in the future have a future that didn’t come to fruition: Bladerunner, Return to the Future, Escape from New York, Terminator.

But we all know that the thing about time travel is that someone or some group is always messing with the time line so the world we live in now is improved somehow for themselves or everyone.

They go back in time and see to it that JFK isn’t shot.

They go back in time and make sure leaf blowers are never invented. People have to rake so that it’s quiet on the weekends.

Go back to the distant past and make sure the Beegees don’t adopt that falsetto vocal style or maybe embrace a presentation more in the realm of Drowning Pool, Five Finger Death Punch or Billie Eilish.

There’s all kinds of things you can do as a Time Traveler.

Travel light and make sure you choose a window seat.

It’s one thing being next to someone that doesn’t fit their own seat on a trip across the country for 3 hours, envision being next to them for 30,000 years.

Whole lot of bags of peanuts and those thin wafers with caramel in the middle.

Buckle up and remained seated for turbulence.

Whole lot of shakin’ goin’ on.

Is that still a song in this time period?

That would constitute the distant past me thinks. As a time traveler make sure you throw in some idiomatic gems now and then to make sure you stand out. Dress funny and put pipe cleaners in your hair. Or maybe twenty years or so one way or another.

No mullets or man buns though please.

And get rid of those names of music genres that came out of nowhere: Dad Rock, Yacht Rock, and Deep Chill.

Even if you’re fined for altering the fabric of space-time.

Maybe Chill is OK, at least it isn’t condescending.

Now back to those mashed potatoes.

Thanksgiving is for families and friends are family today

Thanksgiving happy? We’re one year closer to the last 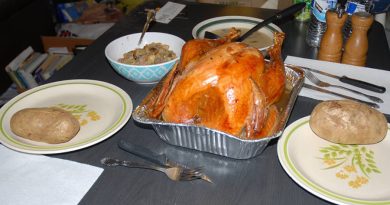 Thanksgiving: A mixed bag of emotions