Donald Trump is a first class ass. His ego is the only thing larger than his wallet, or mouth, and he displays all that goes into the image of “ugly Americans.” And yet, he makes sense to some extent.

As untactful as he is when he talks about immigration and foreigners, his insistence on the need to build a wall and secure our borders has never been more spot on in light of yesterday’s attacks on Paris. Don’t think what happened yesterday cannot happen here. No one ever imagined 9/11.

There is nothing wrong with citizens wanting to have our borders secured. I would go so far as to add our northern border to the list. People can argue the humaneness of rounding up illegal residents and shipping them back to Mexico. They can argue the financial cost of such a task as well. However, they cannot argue the sense it makes to secure our nation’s borders.

Imagine this scenario. If we do not secure our border, how do you think a U.S. military invasion of Mexico would go over? My point is, it is just a matter of time before we have a few incidents like Paris had yesterday that we decide to take the fight south of our leaking border.

It is imperative our next president do more than just allocate more funds for border patrol. Forget about the people, drugs, or guns that come and go and think about whether or not you want to be able to enjoy going to a ball game, concert, or public event without having to see a sea of military personnel standing watch over it.

Again, Donald Trump is an ass. However, with each event that ISIS takes credit for, he becomes a voice to the concerns and fears many Americans hold. So ask yourself, is protecting our borders more important than protecting the feelings of those who might be hurt by doing so? 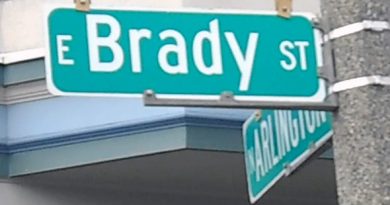 Jeb Bush is the ball in Trump’s game