Steve Spiro grew up in the United Kingdom. He was raised in a modest household with his always cooking mother, his taxi driving father and his somewhat curmudgeon but loving grandmother. As Steve reached his teen years life changed for him as it does for all teens. Indeed, that transition from child to adult through the teen years can be at times brutal and so it was for Steve Spiro.

At first it was cool and he was beloved but then it changed. It become dark and scary. He was bullied and there was rejection and pain. Exacerbating matters Steve Spiro was, and still is, Jewish which, on occasion, brought antisemitic wrath upon him. One classmate in particular was a constant threat to Steve and that made Steve Spiro very nervous and fear filled. 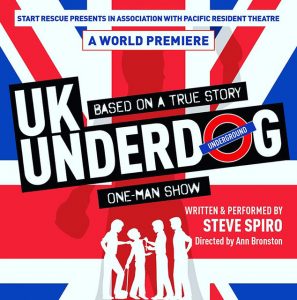 But Steve Spiro is not a quitter. On day he found a voucher for some free martial arts training in his father’s taxi so off to the dojo he went. It was tough, very tough but Steve kept at it and soon he began to develop some significant skill at martial arts that both saved him and at one point put him in serious trouble.

Fearful of repercussions, but no longer fearful of his antagonists, Steve Spiro headed off to Los Angeles, California for what else but to be an actor. As is typical he had more downs than ups and eventually had little choice but to return to his native England. On his return he made some amazing discoveries, including some extremely interesting information about his onetime nemesis and bully. That discovery was truly bittersweet and provides a powerful conclusion to the story.

All of this and more is told by one man, Steve Spiro playing himself and several others in a very unique one-man show. In addition to the clearly significant degree of acting skill displayed the show is abundantly enhanced by meaningful light and sound inclusion to support each moment.

Truth be told there really isn’t all that much unusual about a teen male, or sometimes female, being bullied by some peers. That Steve Spiro chose to elevate his physical person to combat that bullying sends an excellent message. That a young man or woman may choose to go to Hollywood to pursue an acting career is anything but rare. But the overall quality of the performance and the very unique and powerful ending makes this one-man show one that deserves to be seen and enjoyed.

For some great reading visit Here.