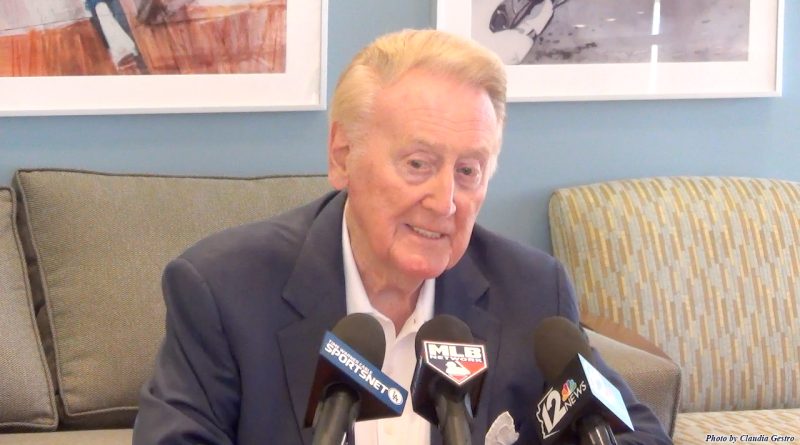 The long time — and beloved — announcer for the Los Angeles Dodgers passed away on Tuesday. Vincent Edward Scully, was 94 years old.

Adored by Dodger fans for more than six decades, he became as much of a Los Angeles institution as Dodger Stadium.

He started his career with the Brooklyn Dodgers in 1950, after serving two years in the U.S. Navy and then attending Fordham University. Former Dodgers announced Red Barber discovered Scully and mentored the young broadcaster.

In 1958 The Dodgers moved to Los Angeles and Scully went with the team. They played in the Los Angeles Memorial Coliseum until 1962 when their current home, Dodger Stadium, was finished.

In his career Scully called sports events with the radio and television networks of NBC and CBS, He was a broadcaster for PGA Golf and the NFL.

Scully’s major fame came as the broadcaster for the Dodgers. One of his most memorable calls came during Game 1 of the 1988 World Series, at Dodger Stadium against the Oakland Athletics. Kirk Gibson, who was injured and could barely walk, let alone run, was called into the game by manager Tommy Lasorda to pinch hit. It was the 9th inning with the A’s future Hall-of-Fame closer, Dennis Eckersley on the mound. The A’s were leading 4-3, and with an awkward swing at the 7th pitch of his at-bat sent a 2-run home run over the right field wall to win the game.

It is one of the most popular baseball videos on YouTube.

Vin Scully was in the booth and called the play this way: “High fly ball into right field, she i-i-i-is … gone!”

After more than a minute of silence, letting the TV picture and roar of the crowd tell the story, Scully said, “In a year that has been so improbable … the impossible has happened!”

The Dodgers went on to win that World Series, the last time until 2020 when, in the pandemic-shortened season, the Dodgers won the Fall Classic.

It doesn’t take much searching on social media to see all the praise and love sent to Vin Scully. On Twitter, for instance, all the mentions of Scully were similar to these:

If you’re not from L.A., you have to understand this: We can’t really agree on anything. It’s a “city” that really is a bunch of regions loosely connected by clogged freeways. A random group of 25 locals will have trouble finding common ground on anything … except Vin Scully.

Everyone is Ready for Super Bowl LVI