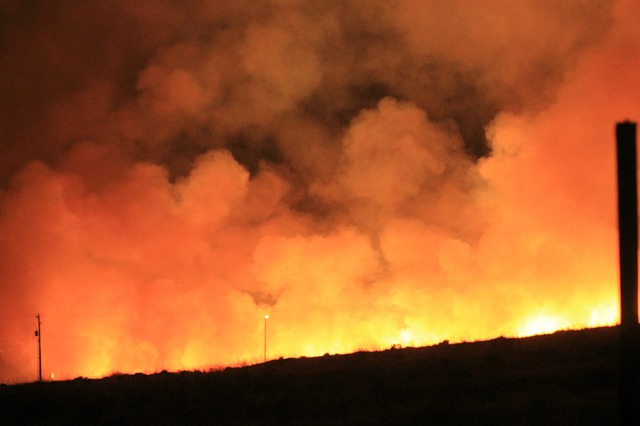 Image by ClassicallyPrinted from Pixabay

Image by ClassicallyPrinted from Pixabay

A raging brush fire left nearly 10 acres completely charred in California’s Rancho San Diego last Wednesday. The fire also reached a gated community leaving one home destroyed while damaging at least six others. Fortunately, everyone was evacuated in time and the LA Fire Department responded quickly to contain and extinguish the flames. Hopefully, the homeowners whose house was completely consumed by the fire are protected with total loss home insurance to cover damages.

From Burning Brush to Raging Fire

At around 10 p.m., residents reported a fire on Willow Glen Drive. According to sources, 30 mph gusts of wind from Santa Ana ripped through the area. It only took 10 minutes for the fire to go from the bottom of a hill to the top where the homes were located.

The fire began as a small brush fire that gained momentum due to the strong winds. Although initially only spreading across 5 acres, wind gusts sent embers over containment lines. Within an hour people were being evacuated, with a total of 200 homes evacuated in the area.

With wind-driven fires burning upslope it’s not uncommon to see many homes totally burned. In this case only one house was lost and luckily, no other homes were a total loss. You may not believe the house in question was damaged, since the facade still stands, almost completely intact. But a quick peek inside reveals that the inside is completely burned through. Fortunately, firefighters responded with quick helicopter water drops and aggressive action on land to stop the fire from progressing.

Hanging On to Home

However, not everyone was willing to leave their homes behind. One man stayed in his home while his family fled to safety. Apparently, he wanted to stay and ‘guard’ his house, although he found himself surrounded by flying embers. Additionally, one man tried to stop the fire from getting to his avocado farm with a garden hose. Nevertheless, in these situations, it’s typically best to flee to safety and leave the ‘guarding’ to professionals.

Firefighters set up a temporary evacuation point overnight, but since then the order has been lifted. The important thing in these situations is to get a containment line around the fire. This lets residents know where to evacuate to safety, but they also serve a practical purpose for fighting the fire. Containment lines are built a ways away from the actual fire to take advantage of natural barriers, and also to give firefighters some buffer and protection.

A History of Fire

All too frequently, San Diego and Los Angeles metropolitan homes are becoming a risk to own as well as other regions of California. The state’s been ravaged by natural disasters.

According to the official California fire registry, over 9,000 fires have burned in California this year alone, damaging more than 4,000,000 acres of land. This is the biggest wildfire season in modern California history. However, it is not abnormal compared to seasons during the 1800s, when an average of 4.4 million acres burned yearly. Peak seasons have even risen to 12 million burned acres! But with a greater urban and suburban footprint, these natural disasters are now more dangerous and pose a greater risk to human life and property.

Fires are unexpected, but at the same time, they’re a common occurrence in many parts of the world. If you live in one of these areas, it’s crucial to educate yourself.  Read available tips for total loss home insurance claims in case you’re affected by fire in the future.

The most important step is to review your insurance policy. Check how much you’re insured for, and compare it to the value of your home and everything in it. If you are insured for less than what everything is worth, you’re at risk of losing more than you gain. One way to keep tabs on the value of your possessions is to document everything of value in a spreadsheet. This way, if you ever need to deal with an adjuster, you have everything clearly documented. This can make the process less stressful and more efficient.

The fire at Rancho San Diego is just one of many examples of how quickly a fire can spread. Environmental conditions such as strong wind can quickly worsen the situation. And while natural disasters have a certain level of spontaneity to them, residents are not completely helpless. Insurance is your best defense if you know how to use it right.