Ghost Hampton smashed onto the bestseller list, and rightfully so because it gives readers the full Monty when it comes to entertainment value.  It’s not only a gripping thriller, which will have you reading long after you should have gone to bed, but it also includes a compelling cast of characters, and some ghosts as well. It also comes along with moments of laughter, so you get your money’s worth and much more. If you are intrigued, you’re on the right path. We were really happy when Ken agreed to answer some of our questions about this breakout novel.

Lyle Hall, the protagonist in Ghost Hampton, seems to have some things in common with Ebenezer Scrooge, from A Christmas Carol. Is that true?

Thanks for noticing. I wanted an anti-hero who had altruism thrust upon him. Our friend Scrooge underwent his transformation in “just one night!” while Lyle Hall was transformed into one horrific, deadly car accident. When he awoke from his near-death experience, he could barely move or even eat. A year later, he starts to get out in the world (via wheelchair in this first book of the trilogy) and realizes he’s being contacted by otherworldly spirits. Lyle doesn’t know how to respond, so he flails about in a very earthly way, causing great upset for his daughter and other living beings around him. An ongoing background theme is the mistrust Lyle has engendered in the local residents during his long years as a greedy real estate lawyer—and how hard it is to change that perception.

Your book is set in Bridgehampton and you have a summer home in Westhampton. What are your favorite things to do in Westhampton, and does Lyle share any of them with you?

We share nothing, thank goodness. Maybe the occasional scotch. Speaking of nothing, that’s what I do once I fight my way out to Westhampton (and it’s just a fraction of the time, distance and aggravation of reaching the real Hamptons). Just think of it—kinda hard to imagine nothing, isn’t it? Our little place is mostly deck and my job is to hold it down by sitting on it, reading and watching OPB (other people’s boats). I do belong to the gym in Speonk (it’s a real place, people!) and enjoy going there to briefly dispel guilt. I also walk on the beach. A little.

You have a band called the “Achievements.” What kind of music do you play, and did any of your bandmates make it into your book?

No, they did not. Have they written any books and put me in? No, so I’m not so bad, am I? Our music, which is original, is called “Americana” I think. We’re a rock band that relies on pop-like hooks, harmony vocals and twin lead guitars in a blues-rock/country-rock vein. We like it, as do our seven fans. Our recent studio recordings can be obtained on Amazon, and most of our oeuvre is available on SoundCloud. Our oeuvre is kind of extensive because we started in the ‘70s. The Achievements comprises members of two bands I’ve played in a lot—the Meade Bros. and the Gabis Bros. The Gabis Bros. are notorious for playing summer weekends at Westhampton’s Artful Dodger (an ancient joint recently leveled to create a vacuum) in the ‘80s and ‘90s. The Meade Bros. are notorious, period.

How long did it take for you to write Ghost Hampton? While you were writing this book what was one of the challenges you faced and how did you solve it?

It took about a year, and it was fun. Editing it took much longer and was not so fun, but it was satisfying to see things pull together out of the large platter of writhing worms it originally was. Once it was ship-shape, I had to sell it. That’s the real test of your sanity and resolve, nascent writers! Any writer will likely say a big challenge is forging time away from other people while working. You start to fixate on Sartre’s line, “Hell is other people.” But once you reach a stopping point and venture out into the world, you are plenty glad to encounter real people, and you realize your brain’s been emptied of real world thoughts… Who is president? Soft serve ice cream is real? Why did God make bugs?

I hear you have a sequel in the works. Can you tell us a bit about it? And when will it hit Amazon?

Yes, thank you for asking. Ghost Hampton is the kickoff of a trilogy—the seeds of the second and third books are planted in the first book. All three, I probably should mention, have deep background themes dealing with man’s inhumanity to his fellow man. That said, the new novel is titled, appropriately, Back to Haunt You. Set in Sag Harbor, Lyle Hall is again a fish out of water and again gets in a lot of trouble. (Women, Irish whiskey, dead people and Voodoo.) Back to Haunt You will be available on Amazon later in 2020—unless it is purchased by a large, faceless entity, in which case, who knows? I’m on the third (and final!) book now: Dead to the World. It’s set in Malta, and I need to go spend a lot of time there!

To find out more about Ghost Hampton head over to Amazon. 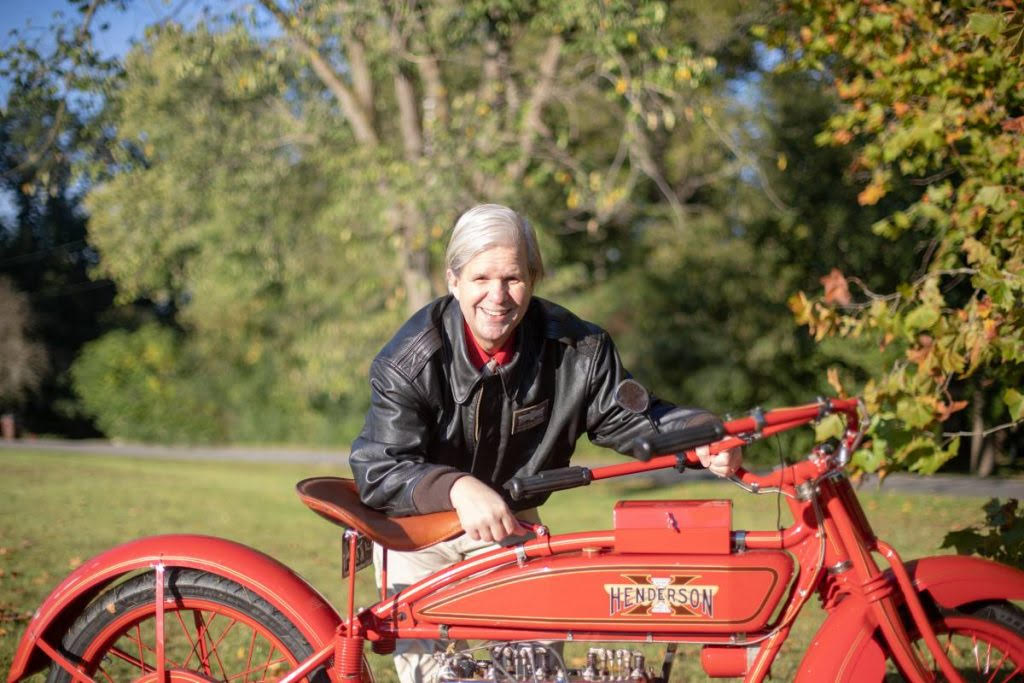 Experience an Author’s Journey 4,500 miles Across America on a 100-Year-Old Henderson Motorcycle as Chronicled in New Book