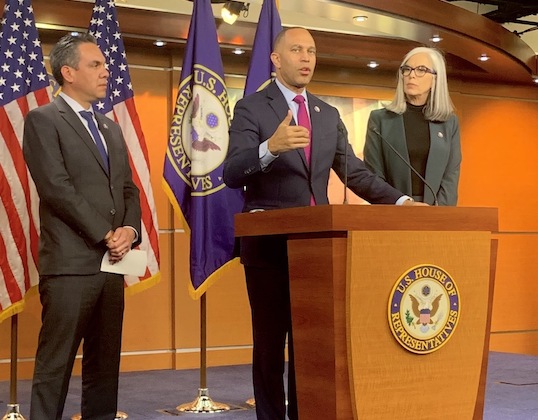 Listen to this article
By COURTNEY COHN

WASHINGTON — As Republican Rep. Kevin McCarthy struggles to gain support to become speaker, Democrats have rallied around their new leaders Hakeem Jeffries, Katherine Clark and Pete Aguilar after the dust settled from the 2022 midterm election.

“It’s all wine and roses right now…because we are coming off a historic over-performance in terms of the House of Representatives,” Jeffries, who will be the first Black man to lead the House Democrats in January and represents New York’s 8th District, told reporters Tuesday.

As minority leader, Jeffries will be tasked with uniting the progressives and moderates of the party, who have clashed over policies in the past.

Specifically, “the squad” – progressive Reps. Alexandria Ocasio-Cortez of New York; Ilhan Omar of Minnesota; Ayanna Pressley of Massachusetts; Rashida Tlaib of Michigan; Cori Bush of Missouri and Jamaal Bowman of New York – has been vocal in its criticisms of the moderate sector of the party.

Jeffries said that it should not be difficult to find a level of unity among them.

“At the end of the day, what unites us is our genuine, authentic commitment to putting people over politics, to fighting for lower costs for better-paying jobs for safer communities, defend democracy, fight for freedom, protect the public interest and show economic opportunity in every corner of America,” Jeffries said.

Another question many observers have is how the new Democratic leadership will work to bridge the gap with Republicans dominated by pro-Trump and far-right ideologues.

The House Republicans are struggling to coalesce around a leader. McCarthy is believed to be short of the 218 votes he needs to become speaker, largely because a handful of the most conservative members of his caucus have vowed to oppose him.

McCarthy’s path to the speakership may have been further complicated on Tuesday when Rep. Andy Biggs, R-Arizona, announced he would challenge McCarthy for the top post. Biggs called McCarthy “a creature of the establishment status quo.”

According to the Pew Research Center, 38% of Americans believe partisan relations in Congress will get worse.

“We are genuinely interested in trying to find common ground with the other side of the aisle to advance priorities that make life better for everyday Americans,” Jeffries said.

However, common ground may be difficult, since Democrats have continued to bash the Republican Party’s recent push for abortion bans and refusals to condemn those endangering democracy.

“There is an essential question facing Republicans. Do they have an affirmative vision for our country? Or is their only plan to divide us, suspend our Constitution, and roll the clock back on liberty?” said Clark, the incoming minority whip.

Former President Donald Trump posted on TruthSocial on Saturday that “a Massive Fraud of this type and magnitude allows for the termination of all rules, regulations, and articles, even those found in the Constitution.” The post about terminating the Constitution has sowed even deeper divisions between the two parties, and Democrats continue to criticize those GOP colleagues who have not yet condemned Trump’s statement.

“It should not be that complicated to denounce the former president,” Jeffries said.

Democrats also have expressed doubts that a Republican House can pass legislation raising the debt ceiling and keep the government open.

Jeffries and other party leaders, including President Joe Biden, have specifically have been targeting the MAGA wing of the GOP. party.

“The notion that extreme MAGA Republicans would threaten to default on our nation’s debt for the first time in American history in order to blow up Social Security and Medicare is stunning. It’s catastrophic,” Jeffries said.