One of the most memorable New Year’s Eves I ever had was in the emergency room, before I had kids.

This is no heart-warming, do-gooder story of me volunteering and helping the world. I was there as a patient. Crappy New Year!

I was dealing with a “life or death” staph infection that resulted in an IV drip being in my arm for more than four hours. So at the exact moment that most of America was watching the big ball drop in Times Square, one time zone after another, I was watching the steady drip-drip-drip from the medicine bag.

At least, I assume it was about that time — they don’t really stop what they’re doing in the ER to count down to midnight. And there is a total lack of confetti.

I had actually been prepared for a rather festive New Year’s Eve that year. Back then, I was a stand-up comic, during the big comedy boom. I was a “road comic,” playing in different cities every week, sometimes every night. Throughout my career, I played in 40 different states and would go back to some of my favorite places once or twice a year for more than a decade. I saw the real America, and made real Americans laugh. Farmers, servicemen’s wives, college kids, small-town lawyers and big city cosmopolitans.

I loved it. Except some days, I hated it. And now, most days, I miss it.

For all stand-up comics, New Year’s Eve is the biggest night of the year. Because wherever you are, New York or L.A., Baltimore or Boise, on New Year’s Eve, the clubs charge the audience twice as much as usual to get in. And while the club makes a good percentage of that extra money, the comics get a cut too. So even though it might be a Tuesday, you’re making good money. And the people are dressed nicely — usually even the comics. And there’s plenty of cheap champagne and noisemakers.

That particular week, in addition to travelling and doing shows, I was dealing with what I first thought was a black eye, then self-diagnosed as a sinus infection. When I woke up December 30th and it looked like I had been mugged, I went to an out-of-town emergency clinic and got a shot of antibiotics, and was told, so to speak, to keep an eye on the swelling.

When I woke up the next morning and couldn’t see out of my right eye, I trusted myself to the kindness of strangers. Based on a referral from the internist who had seen me the day before, a neurologist opened his office just for me on a Sunday morning — New Year’s Eve morning, in Biloxi, Mississippi.

He looked at my chart, and landed upon a detail in my medical history that had apparently gone unnoticed the day before. Upon learning that I have a plate in my head (we’ll deal with that in another column) he informed me that I could either be admitted to the hospital there, or I needed to fly home immediately and go to my own hospital.

The fact that I was a stand-up comic and had two sold out shows that night seemed to matter little to the doctor examining the grapefruit-sized swelling that was now above my right eye. I admit that I did not have a great deal of comedic material ready to explain that look to the audience that night, so it’s probably just as well.

Since I didn’t yet have my own private jet (and by “yet” I mean “ever”), flying home “immediately” as the doctor ordered took a few hours. By the time I got to town it was after 8 at night. By the time I got to the hospital, got checked in, charts compared, a “starter” shot of drugs in my butt and the IV hooked up, it was well after 10 p.m.

Yes, we were approaching magic time. I was pretty much going to lay there for a few hours while the drugs dripped into me, and I would be surrounded by the comings and goings of New Year’s Eve.

The fact that I was 1) conscious, and 2) reasonably sure that I was going to be ok, put me in a much better mood than some of the other people who were in there, or at least better able to enjoy the bizarre nature of some of the stories I was hearing.

In a dark comedy kind of way, spending the better part of New Year’s Eve in an emergency room is something I highly recommend you do at least once — though I’m not sure Obamacare or your particular insurance policy will cover that as an expedition. But trust me, if you’re like me — which is to say more than a tad bit cynical, and amused by the ridiculous situations people sometimes put themselves in — this is a show you’ve got to check out at least once.

I also had another edge over most of the other people in the ER that night – two actually: 1) I had chosen to go to the ER, and 2) I knew I was going. This was certainly not true for most of the people in there that night, some of whom didn’t even know they were there.

This particular ER had 10-12 beds, each separated by a “curtain” made of such thin and sheer material that if your daughter tried to leave the house in a dress made of three layers of it you would stop her. Which meant the “privacy” of the treatment and “doctor-patient confidentiality” were about as secretive as Edward Snowden’s Christmas Card list – which is to say, all out in the open. 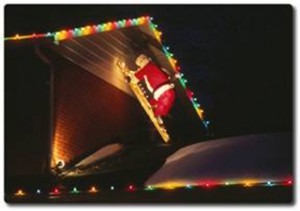 There was the guy who apparently broke his leg jumping off the roof after going up a ladder to try to get the Santa that was up there re-lit — but the guy had been more lit up than Santa ever was.

There was the older gentleman who was having heart palpitations, and the younger, very attractive woman who was apparently with him when this all started … but who soon had to leave, because it turns out — surprise, surprise — she was not, in fact, family.

There was the young woman in the bed directly across from me, who was suffering from an over-indulgence of alcohol and who knows what else at a party that she at first didn’t appear to realize she was no longer attending.

As she slowly emerged from the haze she was in, she alternated between crying and laughing, repeatedly questioning her friend who was with her bedside, uncertain of how she had gotten to that condition, what she had done, and with whom.

Her friend, not much better off, was either confused herself, or quite the prankster, because her answers varied. I do remember wondering where this young woman’s parents were — I don’t recall if they had shown up before I left.

But my favorite entry in the ER entertainment show was the young man who was a bouncer at a local bar — a high risk/low reward job on most nights. On New Year’s Eve (as well as St. Patrick’s Day), there should be hazard pay included — it’s earned. This guy, it seemed, had earned his minimum wage by stepping in to break up an altercation in the bar, and been rewarded with a beer bottle to the forehead.

Fortunately for him, it had apparently been an empty bottle (my experience has always been that you really have to get someone angry to have them hit you with a full beer — because, it’s a FULL beer). I say fortunately because a full beer bottle will likely knock you out, while an empty one will likely break — which is what this one did, leaving a few pieces of broken glass in his forehead.

And so as he sat in the “room” next to me, I could hear him occasionally wince as the person attending to him used tweezers to remove the shards, which he dropped in a metal tray, sounding like buckshot being pulled out of someone’s butt in an old movie.

Suddenly, there was a pause, and a discovery.

“Hey, I can tell you what kind of beer you got hit with,” said the glass-picker. “It was Heineken.”

A groan. “Aw man,” the bouncer answered, “I hate Heineken!”

As if the right brand would have made it all right.

Eventually, my medicine did its job, the swelling went down and I got out. I didn’t say goodbye to any of my “friends,” I just left and got home safely — the end goal for everyone on New Year’s Eve.

Now, as a father, I think back on those scenes and am thankful that my teenage sons are spending the big night this year with family, safely indoors, off the roads, away from parties and beer bottles.

I know that the time is coming, they’re getting older, they’ll want to be with friends … but for this year, I’m safe.

Hope you will be too. Happy New Year.

Mike Brennan has been a Pulitzer Prize-nominated newspaper reporter, a magazine writer, an investigative journalist, a nationally touring stand-up comedian, a joke writer for the Tonight Show with Jay Leno, a morning radio host, a professional auctioneer for numerous charities, an editor, and a film and TV script consultant. He is currently working on a romantic comedy screenplay, and a humorous book on being a father, called The Tooth Fairy Doesn’t Pay for Yellow Teeth. He has lived in the Valley for 19 years, and has two teenage sons. Contact the author.

Dark side of the eclipse emojis