Going into Sunday’s game against the Buffalo Bills, the Oakland Raiders had won two games this season, both wins against teams that could have been playoff contenders. The Bills were another team that had a shot at the post-season. They had improved quite a bit this year.

Their record going into Sunday’s game was 8-6 so it was easy to assume they would win, but the Raiders have improved a lot as well so no team should count on beating the Raiders, especially after they beat the Chiefs and 49ers.

It isn’t quite a storybook season for the Raiders, but the education of quarterback Derek Carr is coming along and the Oakland defense is pretty good. They are ranked 17th out of 32, but that could be due to them spending a lot of time on the field per game. The Oakland offense wasn’t very good in the beginning of the season and that wears out a defense. For the season the Raiders average giving up 351 yards per game and 27 points. In their last three games the Oakland defense has given up just 22 points per game on average and 319 yards.

As the offense has improved, so has the defense.

They did have that blowout loss against the St. Louis Rams in November, 52-0, so that skews the numbers, but over all, the Raider offense and defense have gotten better.

Now the Oakland Raiders have three wins this season, knocking the Buffalo Bills out of playoff contention with another big win at home. They have three straight wins in the Oakland County Coliseum and the Raider Nation sees light at the end of the tunnel.

The game started with a Buffalo touchdown, a 42-yard pass from Kyle Orton to Sammy Watkins, but the Raiders scored three times in the second quarter, a three-yard touchdown pass from Derek Carr to James Jones and two field goals by Sebastian Janikowski.

Dan Carpenter kicked a field goal for the Bills in the second, but at the half the Raiders were leading, 13-10.

In the third quarter the Raiders got two more field goals and the Oakland defense kept Buffalo from getting any points. When the fourth quarter started the score was 19-10, Oakland.

The Bills started a comeback, scoring a touchdown on a 29-yard pass from Orton to Scott Chandler, bringing the score to 19-17, but Oakland answered with another touchdown pass by Carr to Jamize Olawale, in the fourth, keeping ahead of the Bills.

Buffalo had two touchdowns in the fourth, but it wasn’t enough to win the game. As has been the case all season, the Raiders defense kept the team in the game.

Quarterback Derek Carr is no longer a rookie. He is making better decisions with his offense and on Sunday he was able to guide his team to six scores, four field goals and two touchdowns.

It was a tough loss for the Bills who came off a big win over the Green Bay Packers. They were hoping to put themselves in a position for the playoffs. Their last game will be against the Patriots in Foxborough so their final game won’t be any easier. 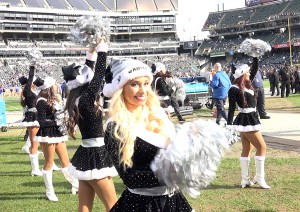 The Raiders finish their season in Denver against Peyton Manning and the Broncos. That will be a tough game, but if the Oakland defense can disrupt the Denver offense, they could win and upset the division leaders, who lost to the Cincinnati Bengals last Sunday. Going into the playoffs with two losses could change their momentum.

The Oakland defense is good enough to disrupt the Broncos offense, but can the Raiders offense outplay the Denver defense?

That will be a great game.

Super Bowl betting is really a gamble this year